The alleged Queensland president of the Mongrel Mob has been arrested after police say they caught him wearing a gang jumper at a suburban Brisbane shopping centre.

A number of other Mongrel Mob clothing items and two notebooks with the club's "charter" were also allegedly found in a vehicle at a Sunnybank house where the man was staying, police claim.

Eric Ian Waimana Pere, 37, who police allege is the Queensland president of the gang, last week appeared in the Brisbane Magistrates Court after being charged with offences including wearing a prohibited item in a public place and breaching a bail condition, the Courier Mail reported. 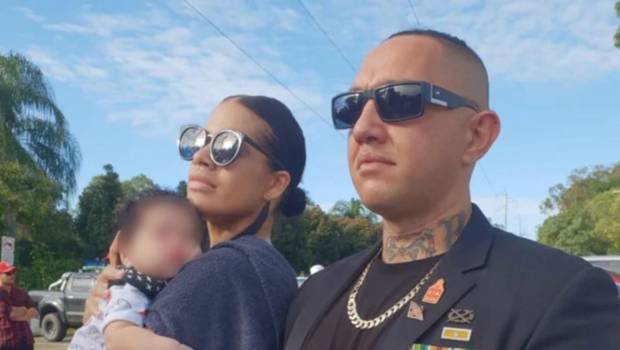 He was arrested on July 13 but granted bail after defence solicitor Kris Jahnke argued Pere was not an "unacceptable risk" of failing to appear in court or reoffending.

The charges came when Pere was allegedly spotted by police at Westfield Garden City at Upper Mt Gravatt on June 19 wearing a hoodie with the words "Mob Mafia" and the Mongrel Mob's signature bulldog printed on the jumper.

Pere also has a bulldog tattooed to the front of his neck.

Police will allege the hoodie had the words "exit 34" printed on it, which allegedly refers to the location of the gang's chapter at Eagleby.

Pere is alleged to have also breached a bail condition, which he was ordered to comply with after being charged with unrelated offences in December last year.

The condition ordered him not to associate with any other gang member but he was with another member of the Mongrel Mob at Westfield Garden City, when police say they spotted him in the hoodie, court documents allege.

On July 8, Queensland Police's bikie busting taskforce Maxima raided a property at Sunnybank Hills where they allegedly found 10 more Mob Mafia-branded hoodies, a number of gang T-shirts and vests and two notebooks with club charters and rules of the "Mob Mafia", detectives say.

Pere has not been charged in relation to these items.

Pere will appear in court again on August 21.