Three white men convicted of murder for chasing and killing Ahmaud Arbery were sentenced to life in prison on Friday, and the judge denied any chance of parole for the father and son who armed themselves and initiated the deadly pursuit of the 25-year-old Black man.

Murder carries a mandatory sentence of life in prison under Georgia law unless prosecutors seek the death penalty, which they opted against for Arbery's fatal shooting.

For Superior Court Judge Timothy Walmsley, the main decision was whether to grant Greg and Travis McMichael and their neighbour, William "Roddie" Bryan, an eventual chance to earn parole. 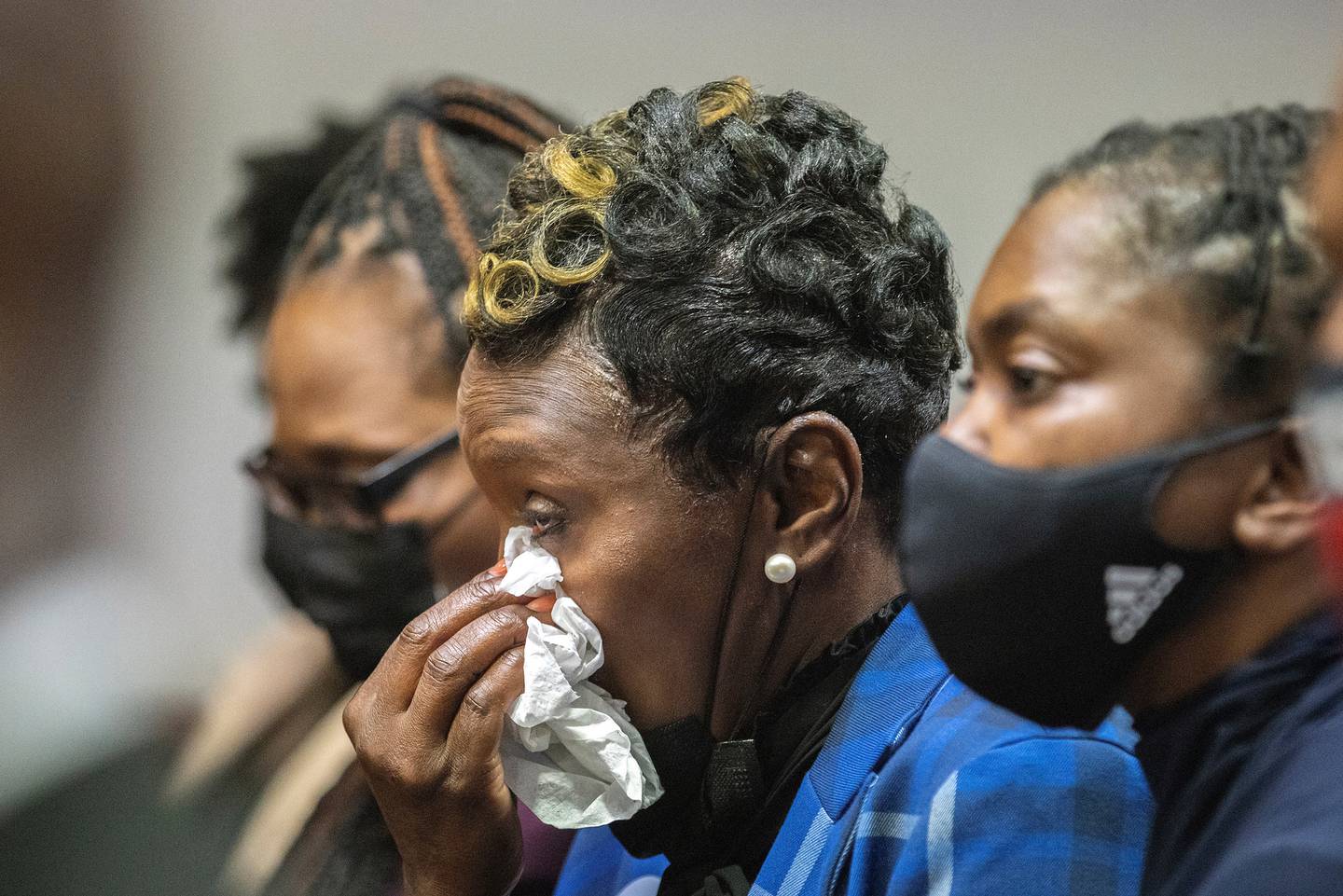 The judge ordered both McMichaels to serve life without parole. Bryan was granted a chance of parole but must first serve at least 30 years in prison.

Walmsley said Arbery left his home for a jog and ended up running for his life for five minutes as the men chased him in pickup trucks until they finally cornered him.

"Ahmaud Arbery was hunted down and shot, and he was killed because individuals here in the courtroom took the law into their own hands," the judge said. 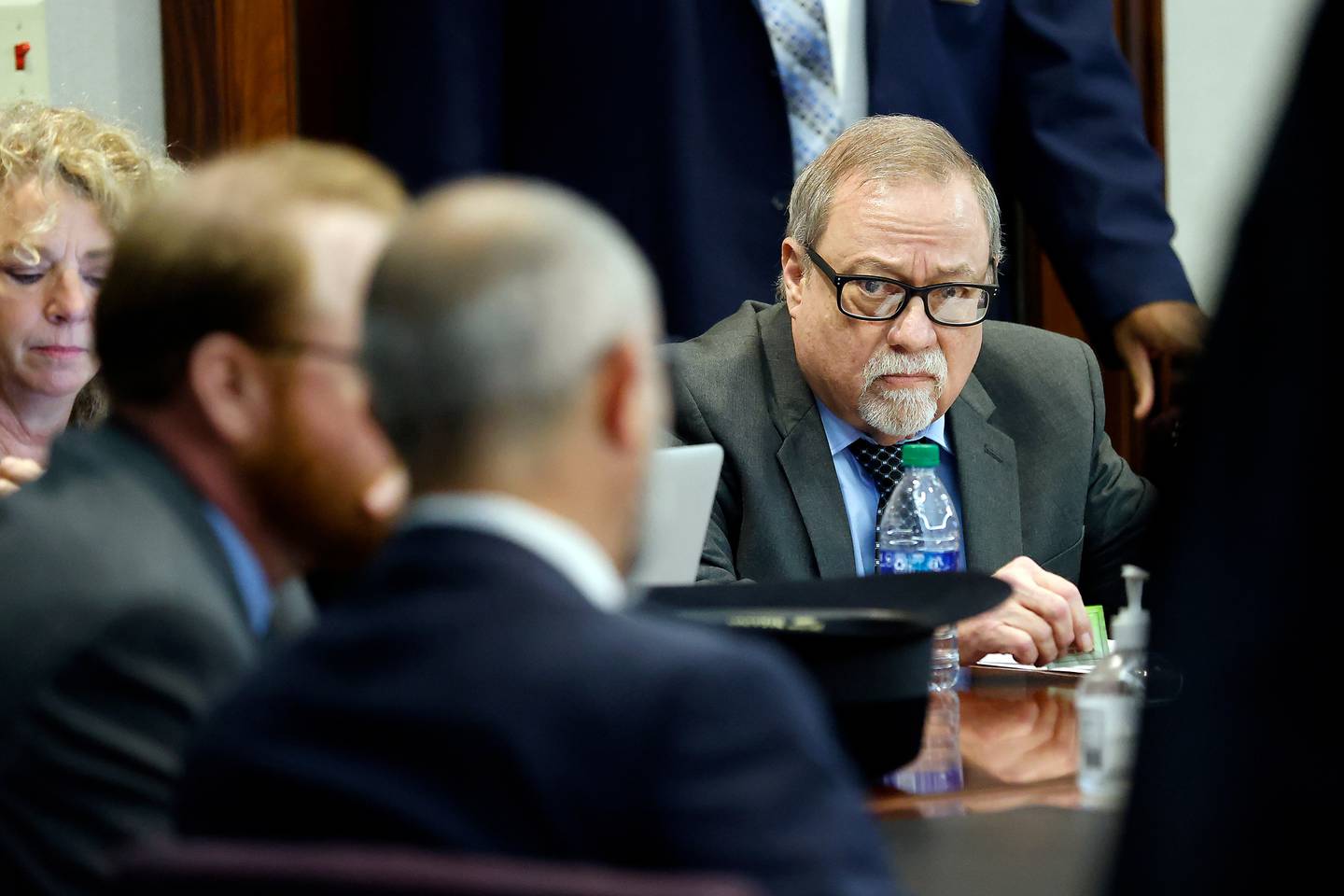 Greg McMichael waits for the sentencing of him and his son Travis McMichael, and a neighbour, William Bryan, in the Glynn County Courthouse. Photo / AP

Before sentencing, Walmsley paused for a minute of silence to help give the scope of what those five minutes must have been like for Arbery.

"When I thought about this, I thought from a lot of different angles. I kept coming back to the terror that must have been in the mind of the young man running through Satilla Shores," he said, mentioning the neighbourhood outside the port city of Brunswick where Arbery was killed.

During the sentencing hearing, Arbery's family had asked the judge to show no lenience. 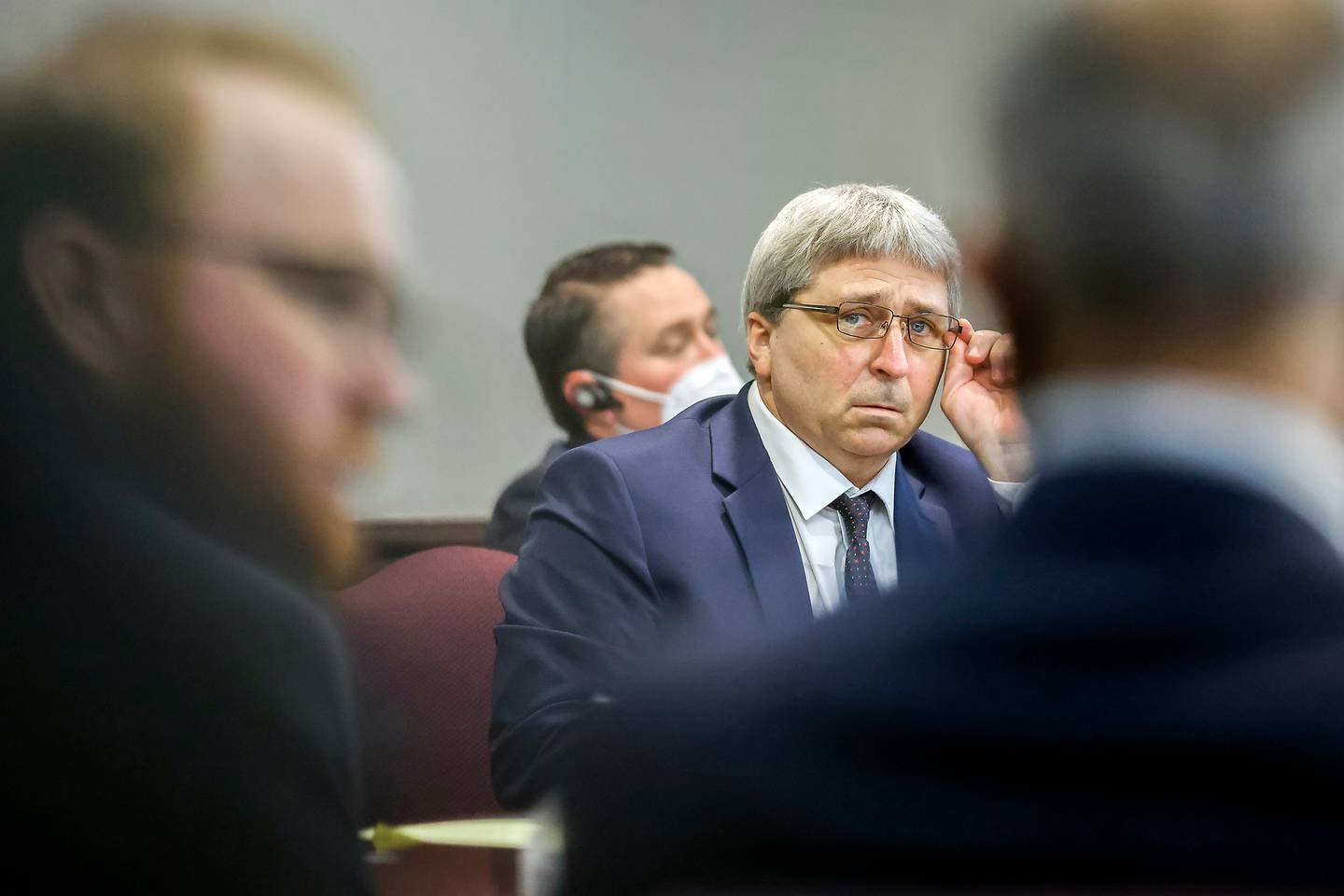 William "Roddie" Bryan waits for his sentencing along with Greg McMichael and Travis McMichael in the Glynn County Courthouse. Photo / AP

Arbery's sister recalled his humour, describing him as a positive thinker with a big personality. She told the judge her brother had dark skin "that glistened in the sunlight", thick, curly hair and an athletic build, factors that made him a target for the men who pursued him.

"These are the qualities that made these men assume that Ahmaud was a dangerous criminal and chase him with guns drawn. To me, those qualities reflect a young man full of life and energy who looked like me and the people I loved," Jasmine Arbery said. 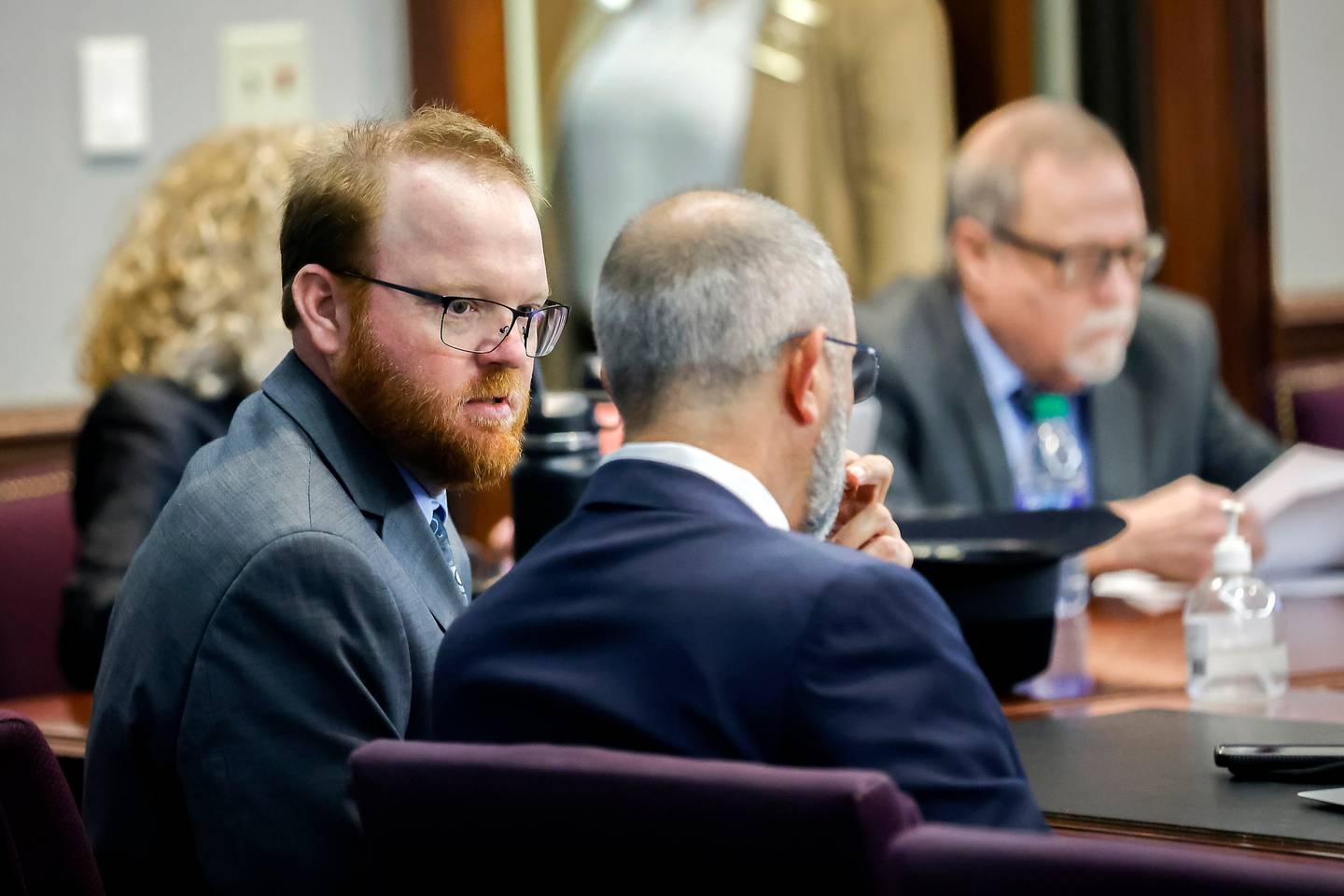 Travis McMichael speaks with his attorney Jason B. Sheffield during his sentencing, along with his father Greg McMichael. Photo / AP

Arbery's mother said she suffered a personal, intense loss made worse by a trial where the men's defence was that Arbery made bad choices that led to his death.

"This wasn't a case of mistaken identity or mistaken fact. They chose to target my son because they didn't want him in their community. They chose to treat him differently than other people who frequently visited their community," Wanda Cooper-Jones said. "And when they couldn't sufficiently scare or intimidate him, they killed him."

The judge's sentences matched the recommendation of prosecutor Linda Dunikoski. She said all deserved that mandatory life sentence for showing "no empathy for the trapped and terrified Ahmaud Arbery". 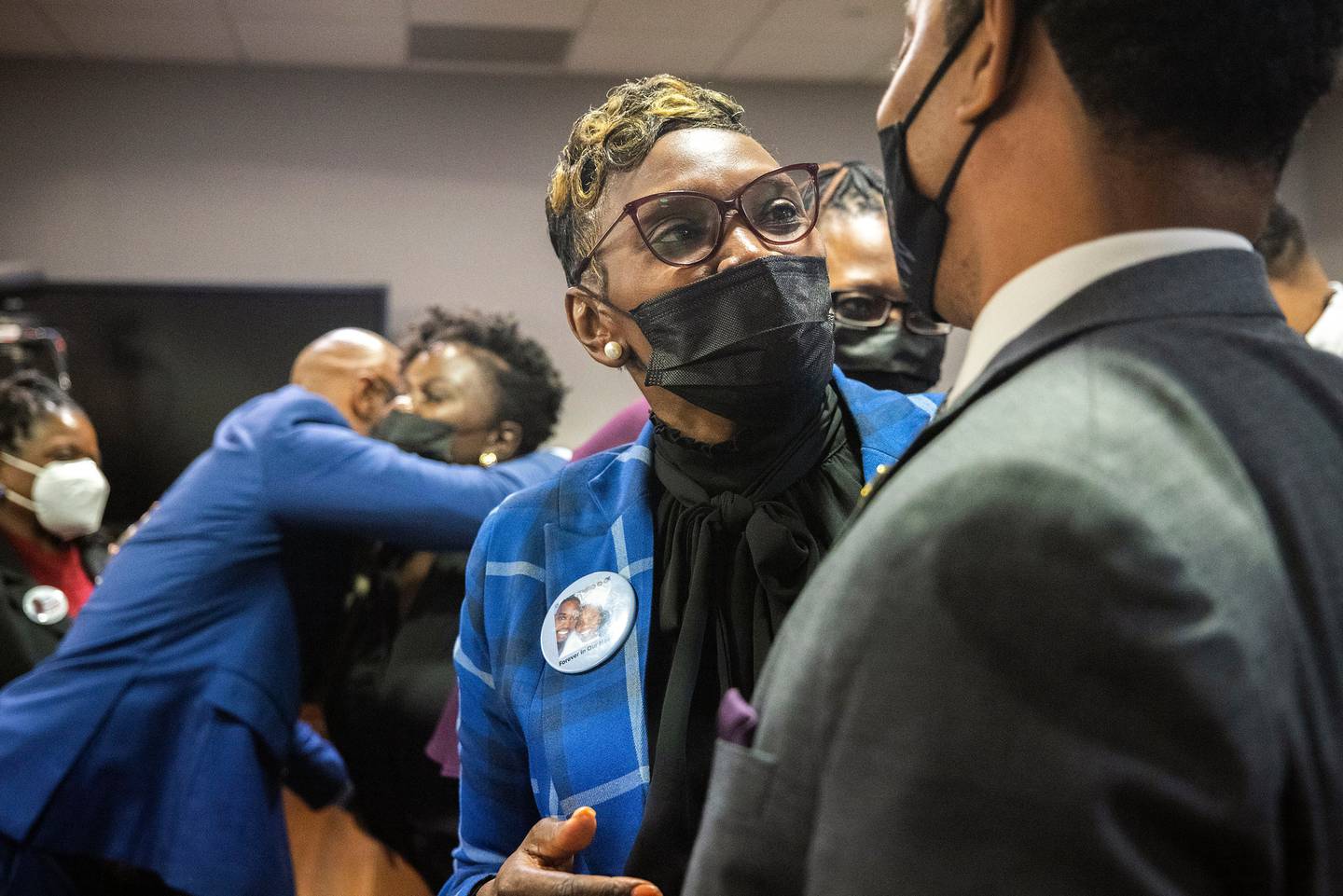 Contending the McMichaels still believed they didn't do anything wrong, Dunikoski disclosed on Friday that Greg McMichael gave cellphone video of the shooting recorded by Bryan to an attorney, who leaked it.

"He believed it was going to exonerate him," the prosecutor said.

Robert Rubin, one of Travis McMichael's defence attorneys, argued his 35-year-old client deserved the possibility of parole. He said Travis McMichael opened fire only after "Mr Arbery came at him and grabbed the gun". But Rubin also acknowledged his client's decisions to arm himself and chase Arbery were "reckless" and "thoughtless".

"They are not evidence of a soul so blackened as to deserve to spend the rest of his life in prison," Rubin said. "This was not a planned murder. This was a fight over a gun that led to Mr Arbery's death." 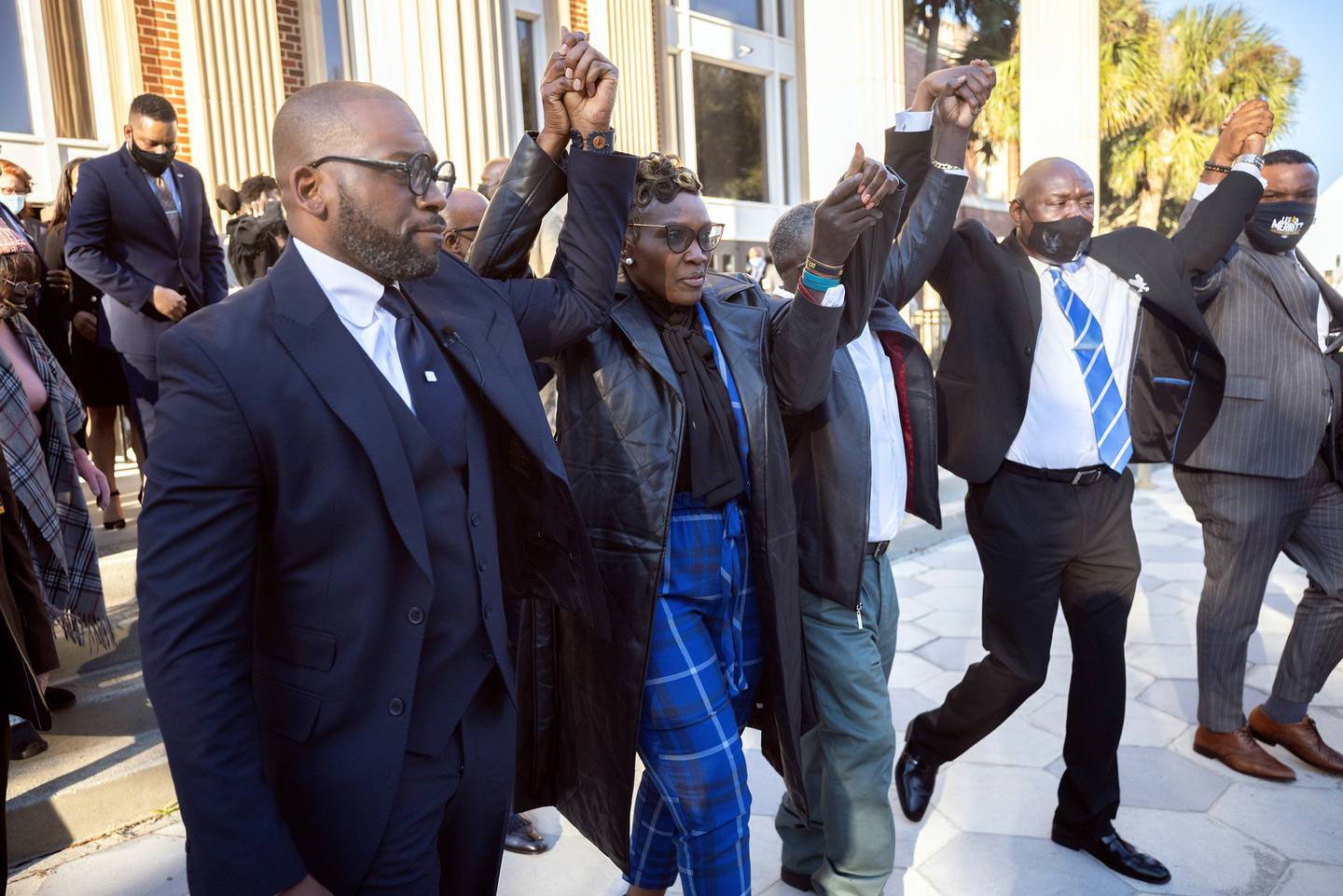 "Greg McMichael did not leave his home that day hoping to kill," Hogue told the judge. "He did not view his son firing that shotgun with anything other than fear and sadness. What this jury found was this was an unintentional act."

Bryan's lawyer said he showed remorse and cooperated with police, turning over the cellphone video of the shooting to help them get to the truth.

"Mr Bryan isn't the one who brought a gun," Kevin Gough said. "He was unarmed. And I think that reflects his intentions."

Bryan is 52, raising the possibility he will spend the remainder of his life in prison even with the chance of parole after serving 30 years.

The guilty verdicts against the men handed down the day before Thanksgiving prompted a victory celebration outside the Glynn County courthouse for those who saw Arbery's death as part of a larger national reckoning on racial injustice. 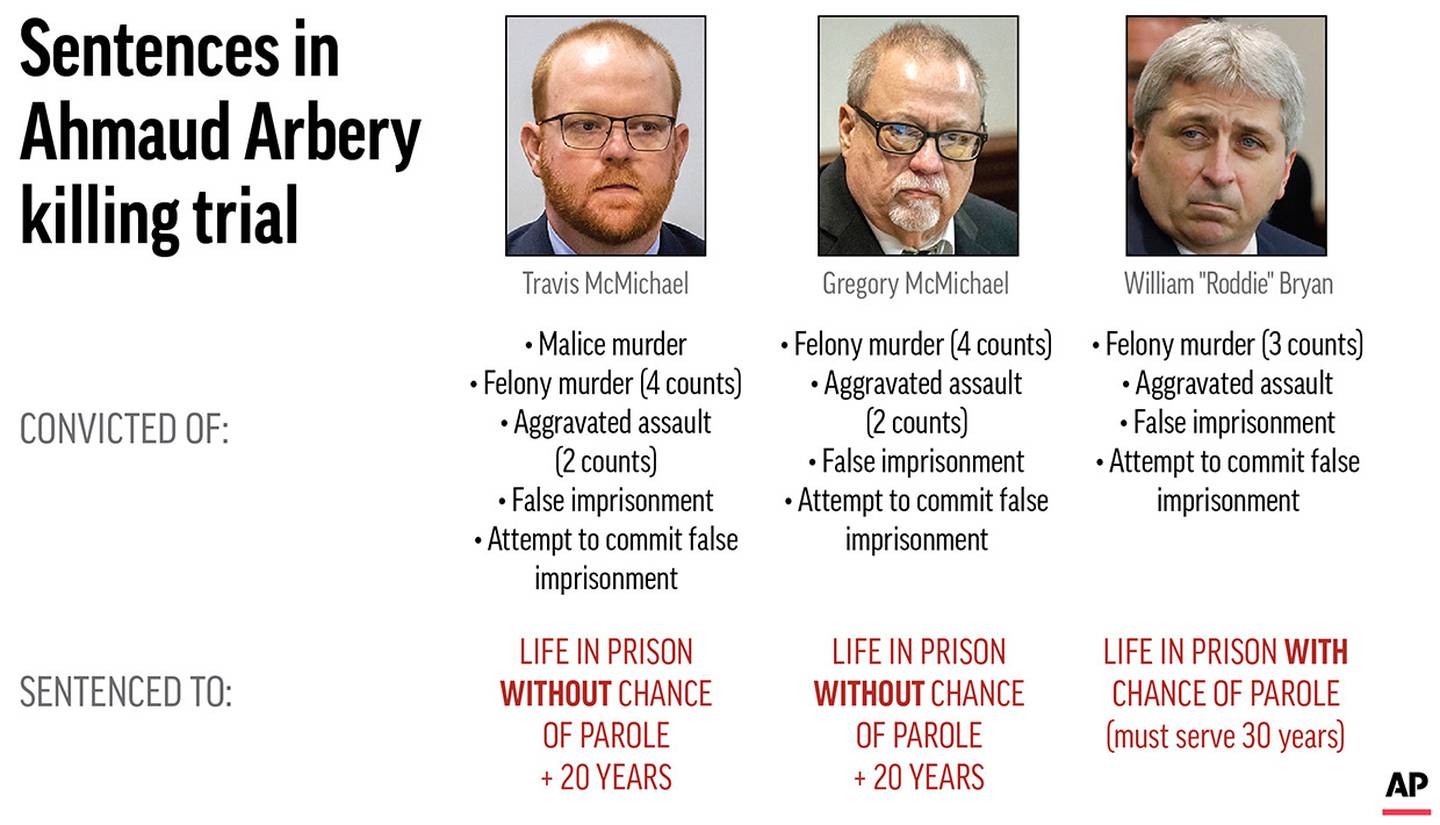 Three Georgia men convicted in the slaying of Ahmaud Arbery got life sentences on Friday, two without the possibility of parole. Photo / AP

The McMichaels grabbed guns and jumped in a pickup truck to chase Arbery after spotting him running in their neighborhood on February 23, 2020. Bryan joined the pursuit in his own truck and recorded cellphone video of Travis McMichael firing close-range shotgun blasts into Arbery as he threw punches and grabbed for the weapon.

The killing went largely unnoticed until two months later, when the graphic video was leaked online and touched off a national outcry. The Georgia Bureau of Investigation took over the case from local police and soon arrested all three men.

Defence attorneys have said they plan to appeal the convictions. They have 30 days after sentencing to file them.

Next month, the McMichaels and Bryan face a second trial, this time in US District Court on federal hate crime charges. A judge has set jury selection to begin on February 7. Prosecutors will argue that the three men violated Arbery's civil rights and targeted him because he was black.