Scientists who have monitored numerous outbreaks of monkeypox in Africa say they are mystified by the disease's recent spread in Europe and North America.

Cases of the smallpox-related disease have previously been seen only among people with links to central and West Africa. But in the past week, Britain, Spain, Portugal, Italy, US, Sweden and Canada all reported infections, mostly in young men who hadn't previously travelled to Africa.

"I'm stunned by this. Every day I wake up and there are more countries infected," said Oyewale Tomori, a virologist who formerly headed the Nigerian Academy of Science and who sits on several World Health Organisation advisory boards.

"This is not the kind of spread we've seen in West Africa, so there may be something new happening in the West," he said.

To date, no one has died in the outbreak. Monkeypox typically causes fever, chills, rash and lesions on the face or genitals. WHO estimates the disease is fatal for up to one in 10 people, but smallpox vaccines are protective and some antiviral drugs are being developed.

British health officials are exploring whether the disease is being sexually transmitted. Health officials have asked doctors and nurses to be on alert for potential cases but said the risk to the general population is low. The European Center for Disease Control and Prevention recommended all suspected cases are isolated and that high-risk contacts be offered the smallpox vaccine.

Nigeria reports about 3000 monkeypox cases a year, WHO said. Outbreaks are usually in rural areas when people have close contact with infected rats and squirrels, Tomori said. He said many cases are likely missed.

Dr Ifedayo Adetifa, head of the country's Center for Disease Control, said none of the Nigerian contacts of the British patients have developed symptoms and that investigations were ongoing. Scientists say they are very surprised by the unusual disease's spread in developed countries. Photo / AP

WHO's Europe director, Dr Hans Kluge, described the outbreak as "atypical", saying the disease's appearance in so many countries across the continent suggested that "transmission has been ongoing for some time". He said most of the European cases are mild.

Britain's Health Security Agency reported 11 new monkeypox cases, saying "a notable proportion" of the infections in the UK and Europe have been in young men with no history of travel to Africa and who were gay, bisexual or had sex with men.

Authorities in Spain and Portugal also said their cases were in young men who mostly had sex with other men and said those cases were picked up when the men turned up with lesions at sexual health clinics.

Experts have stressed they do not know if the disease is being spread through sex or other close contact related to sex.

Nigeria hasn't seen sexual transmission, Tomori said, but he noted that viruses that hadn't initially been known to transmit via sex, like Ebola, were later proven to do so after bigger epidemics showed different patterns of spread.

The same could be true of monkeypox, Tomori said.

In Germany, Health Minister Karl Lauterbach said the Government was confident the outbreak could be contained. He said the virus was being sequenced to see if there were any genetic changes that might have made it more infectious.

Rolf Gustafson, an infectious diseases professor, told Swedish broadcaster SVT it was "very difficult" to imagine the situation might worsen. 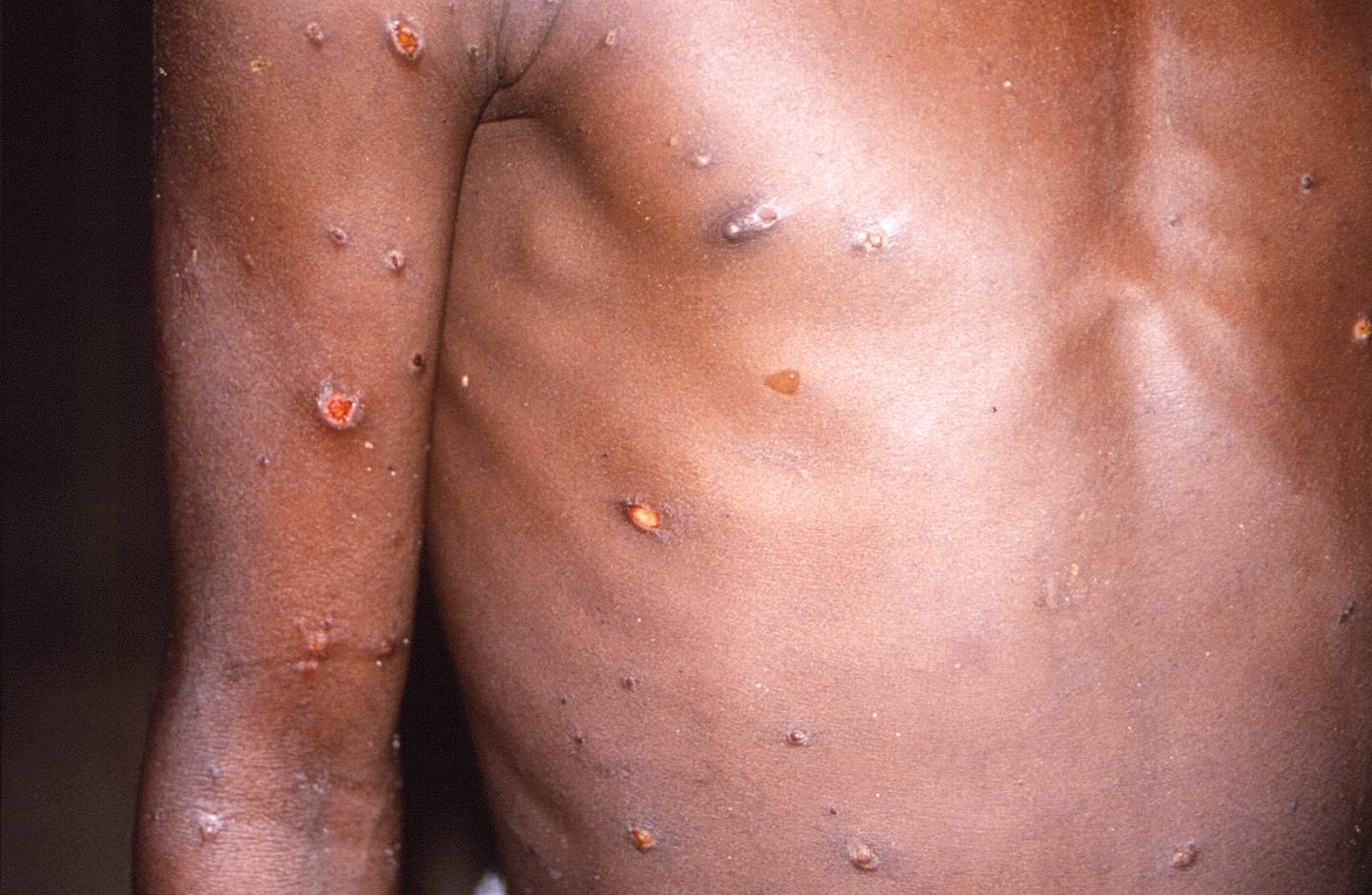 This 1997 image provided by CDC shows the right arm and torso of a patient whose skin displayed a number of lesions due to monkeypox. Photo / via AP

"We will certainly find some further cases in Sweden, but I do not think there will be an epidemic in any way," Gustafson said. "There is nothing to suggest that at present."

Scientists said that while it's possible the outbreak's first patient caught the disease while in Africa, what's happening now is exceptional.

Happi also pointed out that the suspension of smallpox vaccination campaigns after the disease was eradicated in 1980 might inadvertently be helping monkeypox spread. Smallpox vaccines also protect against monkeypox, but mass immunisation was stopped decades ago.

Shabir Mahdi, a professor of vaccinology at the University of Witwatersrand in Johannesburg, said a detailed investigation of the outbreak in Europe, including determining who the first patients were, was now critical.

"We need to really understand how this first started and why the virus is now gaining traction," he said. "In Africa, there have been very controlled and infrequent outbreaks of monkeypox. If that's now changing, we really need to understand why."