President Joe Biden has vowed the United States will "hunt down" the terrorists responsible for two attacks outside Kabul International Airport in Afghanistan and "make them pay".

Twelve members of the US military were among those killed in the bombings today, along with at least 90 Afghan civilians. That death toll is likely to keep rising. Another 15 service members and 150 civilians were injured.

No US soldier had been killed in Afghanistan since February of 2020.

According to data from the Department of Defence, today's loss of life was the worst American forces had suffered since August 5, 2011, when a helicopter was shot down and 30 Americans died.

The US has blamed the Islamic State affiliate ISIS-K for the attacks, and ISIS itself has claimed responsibility.

"To those who carried out this attack, as well as anyone who wishes America harm, know this: we will not forgive. We will not forget. We will hunt you down and make you pay," Biden said, speaking at the White House.

"I will defend our interests and our people with every measure at my command."

He said he had asked his military commanders to develop operational plans to strike ISIS-K's assets, leaders and facilities.

"We will respond with force and precision at a time and place we choose, in a moment of our choosing."

"If we can find who is associated with this, we will go after them," Gen McKenzie said.

He said he expected more terror attacks to occur before the US completes its withdrawal.

Biden said he had been in "constant contact" with military commanders in Afghanistan throughout the day, and the situation was "still evolving".

"These American service members who gave their lives - it's an overused word, but it's totally appropriate here - were heroes. Heroes engaged in a selfless mission to save the lives of others," he said.

"They were part of the bravest, most capable, most selfless military on the face of the earth, and part of what I call the backbone of America. The best the country has to offer.

"Jill and I, our hearts ache, as I'm sure all of yours do as well. President Joe Biden pauses as he speaks about the bombings at the Kabul airport that killed at least 12 U.S. service members. Photo / AP

"We have some sense, like many of you do, what the families of these brave heroes are feeling right now. You get this feeling like you're being sucked into a black hole in the middle of your chest, and there's no way out.

"We have a continuing obligation, a sacred obligation, to the families of those heroes. That obligation is not temporary. It lasts forever.

He said he was "outraged as well as heartbroken".

Biden argued that the threat of a "complex set of attacks" from ISIS-K, which he had spoken about repeatedly before today's attacks, justified his decision to keep US forces within a tight perimeter at Kabul's airport.

"This is why, from the outset, I repeatedly said this mission was extraordinarily dangerous. It's why I have sought to limit the duration of the mission," he said.

"We must complete this mission, and we will. We will not be deterred by terrorists. We will not let them stop our mission. We will continue.

"We have so much to do. It's in our capacity to do it. We just have to remain steadfast.

"These ISIS terrorists will not win. We will rescue the Americans. We will get our Afghan allies out. And our mission will go on. America will not be intimidated." 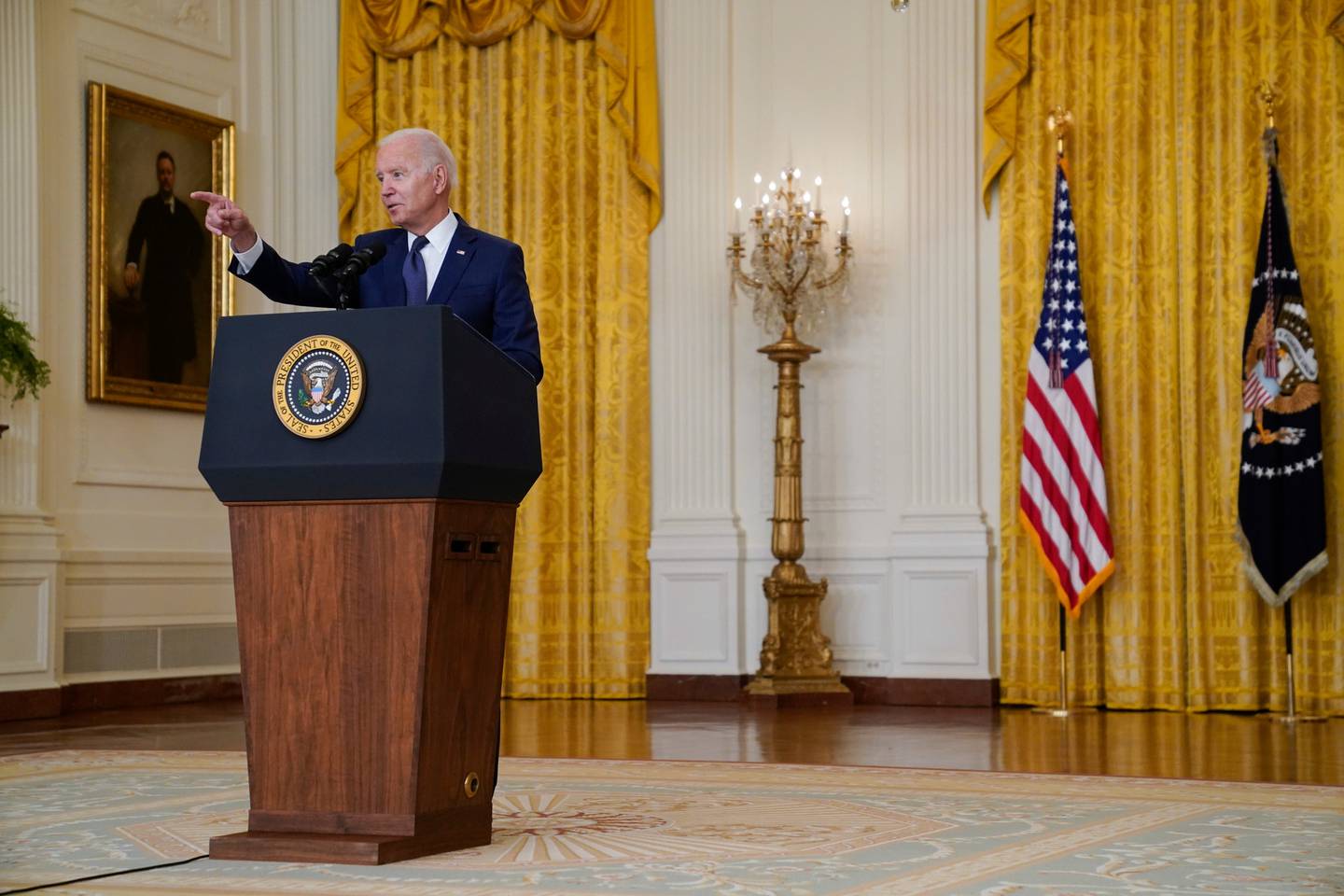 President Joe Biden vowed the United States will 'hunt down' the terrorists responsible for two attacks outside Kabul International Airport in Afghanistan and 'make them pay.' Photo / AP

About 6000 US troops are stationed at the airport in Kabul, where they are trying to evacuate American citizens and eligible Afghans.

One of the bombings took place at the Abbey Gate, a checkpoint where US forces were physically checking people before allowing them into the airport. The other happened about 200 metres away at the Baron Hotel, which has been used as a staging point for some of the evacuations.

Gen McKenzie said the continuing threat from ISIS-K would "not deter" the US from completing its evacuation mission.

"The plan is designed to operate while under stress, and under attack, and we will continue to do that," he said.

"We will co-ordinate very carefully to make sure that it's safe for American citizens to come to the airfield. If it's not, we'll tell them to hold.

"Our mission remains. We're still committed to flying people out, until we terminate operations at some point towards the end of the month."

Defence Secretary Lloyd Austin released a statement expressing his "deepest condolences" to the loved ones of the murdered troops. Wounded Afghans lie on a bed at a hospital after a deadly explosions outside the airport in Kabul, Afghanistan. Photo / AP

"Terrorists took their lives at the very moment these troops were trying to save the lives of others," General Austin said.

And General Mark Milley, Chairman of the Joint Chiefs of Staff, hailed the fallen soldiers' bravery.

"These brave men and women are taking risks to save lives of the vulnerable and safeguard Americans. They've moved more than 100,000 people to safety," he said.

"I could not be prouder of their service. They gave their lives to save others. There is no higher noble calling."

Biden had previously warned that "any attack" on US forces would be "met with a swift and forceful response", though he aimed that remark at the Taliban.

According to Gen McKenzie, the Taliban was not involved in today's attacks. However the militant group is responsible for security around the airport, and the bombers appear to have made it through a Taliban checkpoint. 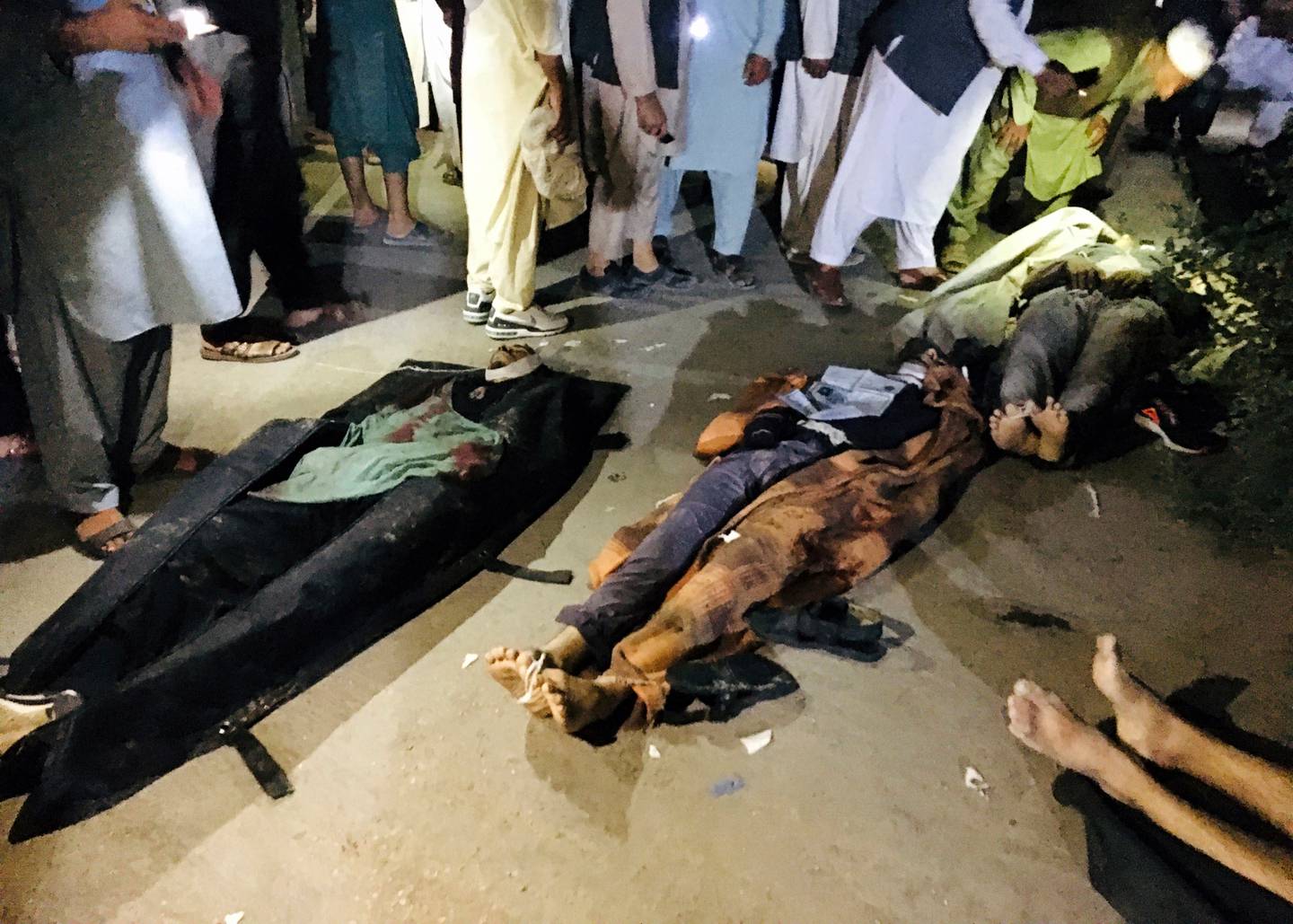 Dead bodies of Afghans lie on the ground at a hospital after deadly attacks outside the airport in Kabul, Afghanistan. Photo / AP

During his media conference, Biden insisted it was not a mistake to rely on the Taliban for help securing the airport.

The President initially responded to the violence in the White House Situation Room, along with Secretary of State Antony Blinken, Gen Austin and Gen Milley.

Biden spoke to commanders on the ground in Kabul before moving to the Oval Office.

Other prominent political leaders in the US have reacted furiously to the attacks.

"It is sickening and enraging to hear that at least 12 United States service members have been killed and more have been injured at the hands of terrorists in Kabul," said Senate Minority Leader Mitch McConnell, the most senior Republican in Congress.

"This murderous attack offers the clearest possible reminder that terrorists will not stop fighting the United States just because our politicians grow tired of fighting them. In this image from a video, onlookers and injured people surround the site of a deadly explosion outside the airport in Kabul, Afghanistan. Photo / AP

"We need to redouble our global efforts to confront these barbarian enemies who want to kill Americans and attack our homeland."

He added that Afghan civilians who helped US forces "deserve better than the dark fate that will await them" when America end its evacuation, leaving them at the mercy of the Taliban.

Other Republicans have gone after Biden directly.

"The best thing for America right now would be for Joe Biden to resign or for the Cabinet to step up and take him out," Congressman Mark Green, an Afghanistan War veteran, told Fox News this afternoon.

"It's time for Joe Biden to be gone."

Biden has copped heavy criticism for the chaotic US withdrawal from Afghanistan, which allowed the Taliban to swiftly conquer the country, and has left thousands of desperate people to wait for days outside the airport, hoping to escape.

Yesterday, Blinken said about a thousand American citizens had yet to be evacuated. The number of stranded Afghans is far higher.

"This is a terrible way to prove that Afghanistan can once more become the bed of terrorism. We pray for the families of the Marines killed, the several injured, and for the safety of all."