A Wellington woman has posted a unique listing offering a room to rent at her property for just $25-per-week - but there's a catch.

A flatmate listing, posted on Trade Me on January 9, is wanting a free live-in nanny who will pay for the honour of looking after the home owner's two kids.

For just $25-per-week you get the largest bedroom in the Ngaio home, but you'll be required to pick up and drop off two children aged 7 and 10 to and from school.

Their ideal flatmate is a female with a car, full NZ licence with a clean record and someone who loves children. 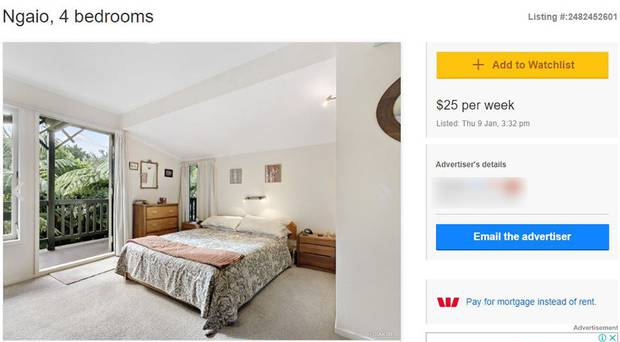 A Wellington woman has posted a rather unique Trade Me listing offering a room to rent at her property for just $25 - but there's a catch. Photo / Trade Me

"We are looking for a single female flatmate for our sunny north-facing 4br townhouse that overlooks a stream," the lister wrote.

"The bedroom is the largest in the house. It is north-facing that opens out to a balcony with steps that go down to the stream. There is also a heat pump in the bedroom.

"I am a single mum working full-time in Wellington CBD with 2 beautiful children, 7 and 10 years old. I'm looking for a reliable flatmate who can fetch my children to and from their schools in Lower Hutt during the first half of each school week. The reduced rent reflects this.

"There are 4 terms in a year and 10 weeks in a term. That equates to about 40 weeks of commute (minus public holidays)."

However, during the holidays, the successful flatmate's rent would go up to $200 while the children are not attending school.

"Regular rent ($200) would apply during the school holidays."

If couples are interested the rent will go up to $200 instead of $25 during the school term and $300 per week during school holidays. 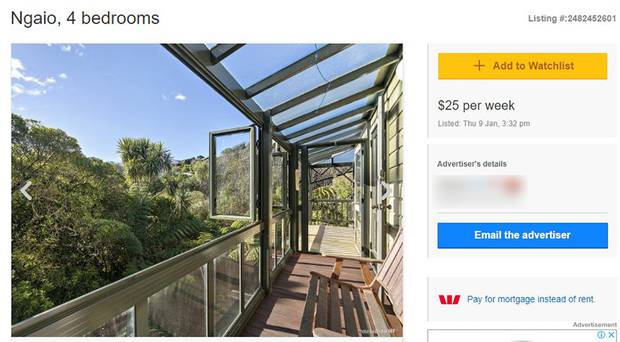 The townhouse has four bedrooms and three bathrooms, with a deck overlooking the stream. Photo / Trade Me

The ad was posted to social media and attracted mixed reviews.

Some people complained the reduced rent wasn't worth the time spent.

"So you basically have to pay in order to work there? Best deal ever!" one person joked.

Another said: "They don't need a flatmate, they need an au pair...just....oh, right, they want to charge somebody rent on TOP of the child responsibilities."

One questioned why males weren't considered to look after her children.

However, others suggested the deal could suit certain flatmates.

"It says that you pay $25pw + utilities in rent during the school term and 200pw during the holidays. It's a weird AF ad but it's probably the best accommodation you could find for the money," one local wrote.

Another added: "I guess it may suit someone who is older and either can work from home or might consider retirement but is looking for cheap accommodation."