Dave Barker was driving home from work on Wellington's main arterial route when he suffered a life-threatening cardiac arrest and lost control of his car.

Barker, a former police staffer and member of the Wellington Police launch Lady Elizabeth III, blacked out and his car hit the centre barrier on State Highway 1 nine times before coming to a stop.

In the two minutes after the crash, 55 vehicles drove past but the four strangers who stopped to help have been credited with saving Barker's life, according to police magzine Ten One.

Dog handler Constable Regan Woodmass was driving southbound on the same highway when he spotted the crash near Johnsonville and used the nearest exit to loop back.

"Thinking back to that night, it was a lot of good fortune and luck that the right people with the right skills were close by to help," Woodmass told Ten One.

"Otherwise, this would not have ended the way that it did." 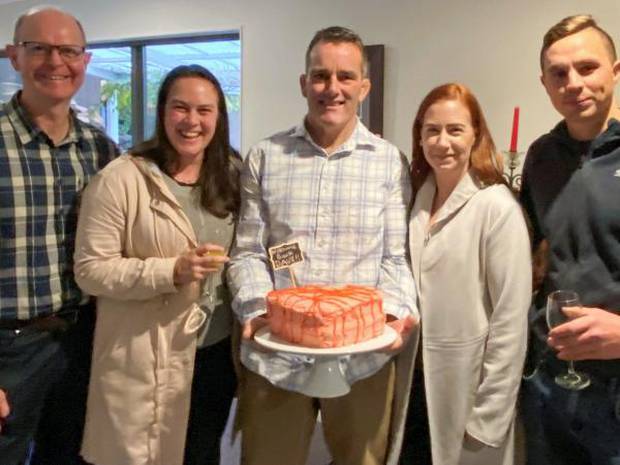 According to the police publication, Irene Campbell was the first to stop and told the officer Barker needed resuscitation.

"I approached the vehicle, noticing he was unconscious but looked okay to move, so I dragged him out of the passenger door to start CPR," Woodmass said.

Lizette Standish, a mechanic who had completed first aid training, also offered to help at the scene.

Stuck in the bumper-to-bumper traffic behind the group was orthopaedic surgeon Christopher Hoffman who identified himself and readily took over the CPR.

Woodmass then noticed an ambulance caught up in the trailing traffic queue and ran down to alert them.

Paramedics shocked Barker several times in the ambulance before he was stable enough to move to hospital.

There, in critical condition, he was put on life support.

According to the police publication, just two days earlier Barker had undergone a cardio treadmill test due to a family history of cardiac issues.

There had been no sign then of any problem.

In the days after the crash, Woodmass received a call from Barker's sister, authorised officer Jo Barry, to thank him for his actions that night.

"I'm so thankful for everyone who helped Dave that night," Barry told Ten One Magazine.

"Though Regan is incredibly humble, Dave wouldn't be with us now if it wasn't for Regan's actions and quick thinking and his strength to drag Dave out of the car.

"As a family, we are hugely grateful for Regan's response to what could have been a terrible outcome."

Woodmass told Ten One Magazine it was not often they got to hear what happened after a rescue but they always hoped they had given the person their "best chance".

"It's been great to hear updates about Dave's recovery. It was a privilege to meet him and his family under much happier circumstances.

"Dave is a really awesome guy with an amazing family and we had a great conversation at the reunion party.

"There were so many good people who helped that night and I'm just thankful that this story has a happy ending."