Labour's landslide victory in the 2020 New Zealand election has been reported around the world, with major outlets praising Jacinda Ardern and Labour for the win and politicians and members of the public rushing to congratulate her and make plans to move to New Zealand.

Across the ditch, former Labour leader Bill Shorten said Kiwis had "great taste in political leaders" and congratulated his "friend" Jacinda Ardern for her "famous victory".

Our friends across the ditch - they call Eskis chilly bins and thongs jandals, but they have great taste in political leaders. Huge congrats to my friend @jacindaardern and the whole team at @nzlabour on what is shaping up to be famous victory tonight #NZVotes #jacindaardern pic.twitter.com/wma8iYcijZ

news.com.au's coverage suggested that the results were very different, sharing a photograph of Ardern looking concerned above a headline labelling the results a "total disaster". Readers that clicked through were taken to coverage that accurately reported the massive swing towards Labour. 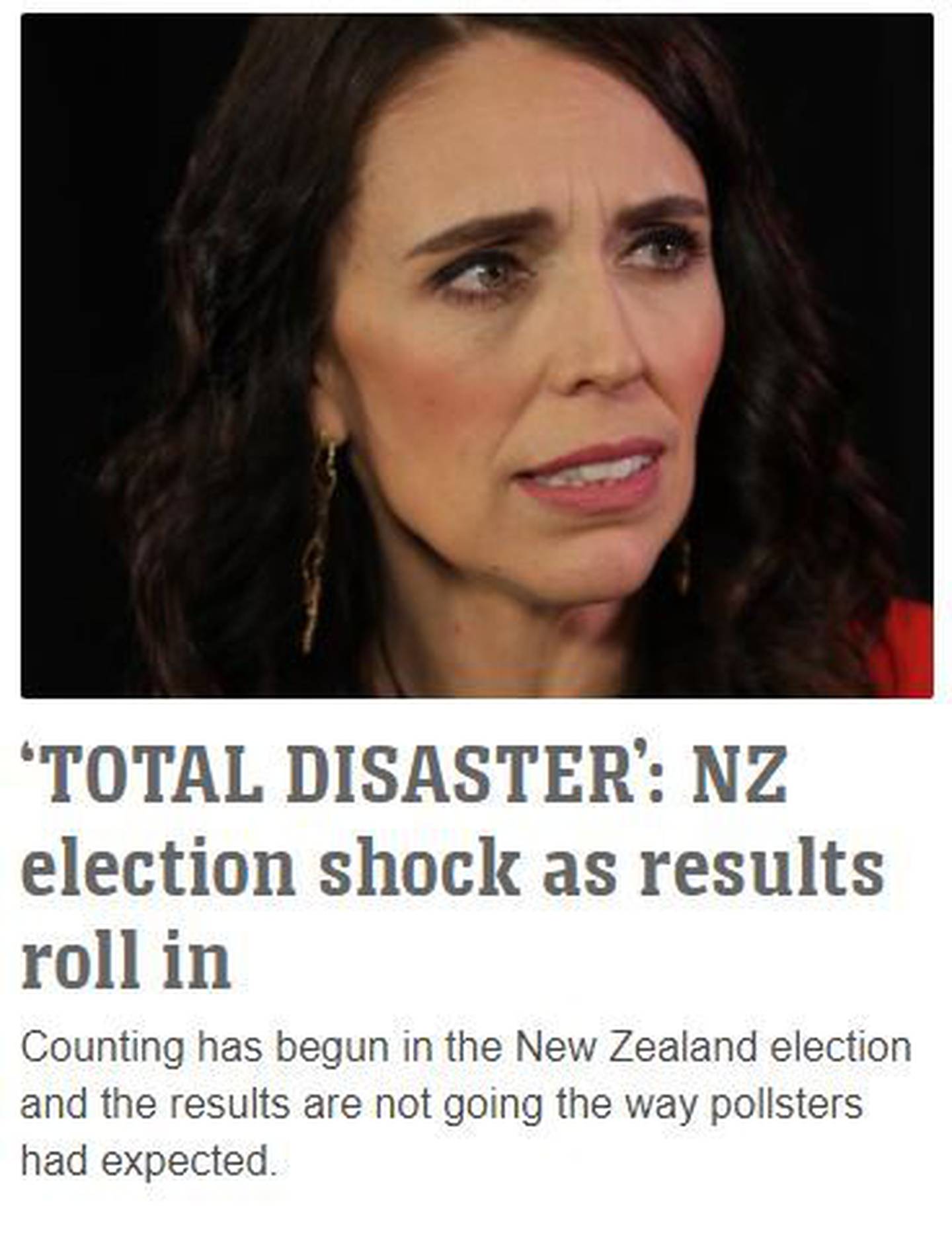 News.com.au's initial reporting of the results suggested that the outcome had been quite different.

After the results were clear, the headline and photo changed. 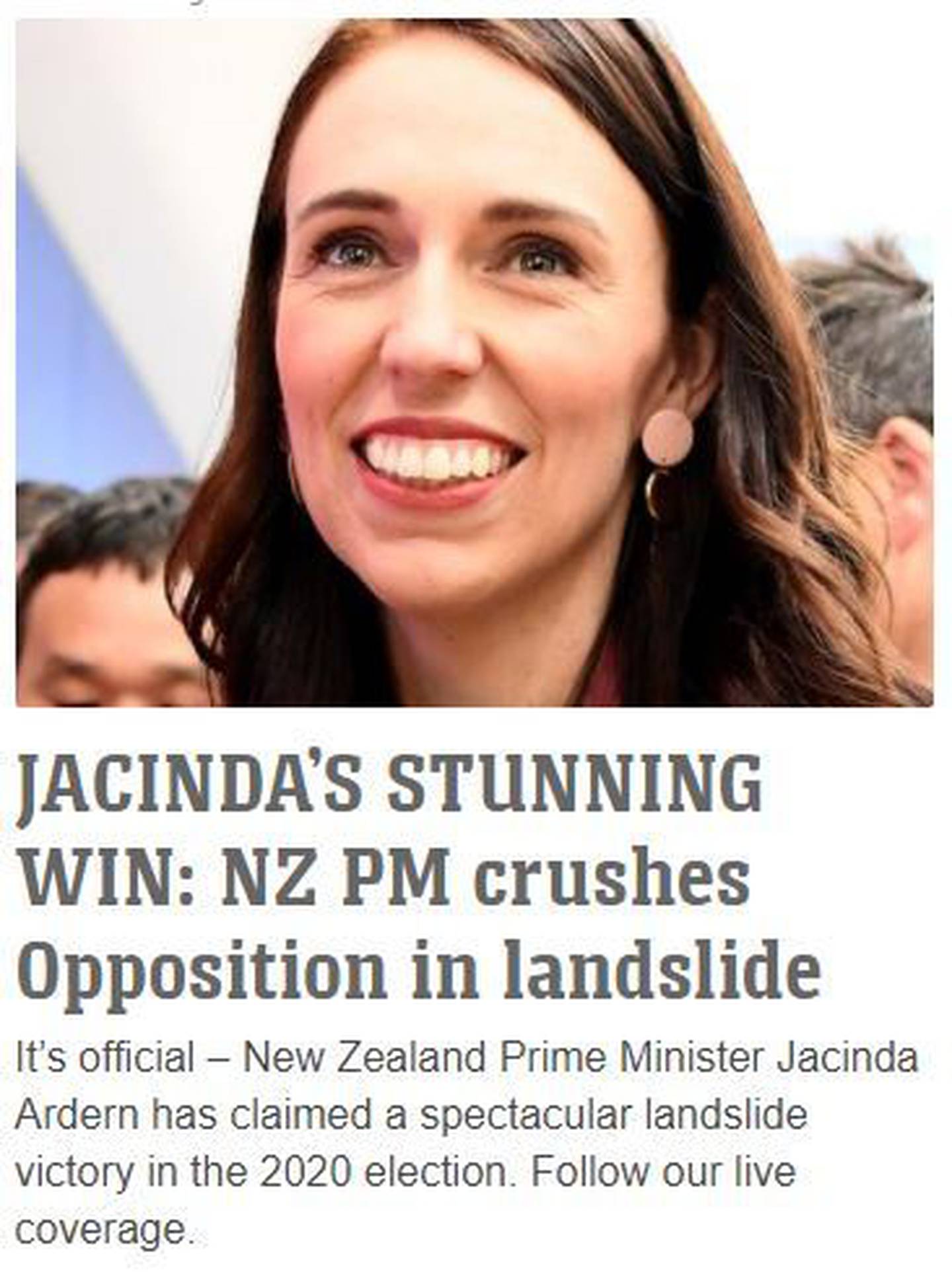 After the result was clear, the coverage changed.

That same outlet zeroed in on the celebrity angle when it came to David Seymour and the Act Party's big result, reporting that "a former contestant on New Zealand's version of Dancing with the Stars is on track to become the leader of the country's third-largest party."

The Daily Mail's Australian arm called the election early, posting to Facebook around 8.30pm with a file photograph of Jacinda Ardern embracing Clarke Gayford, labelling the win a "massive landslide". 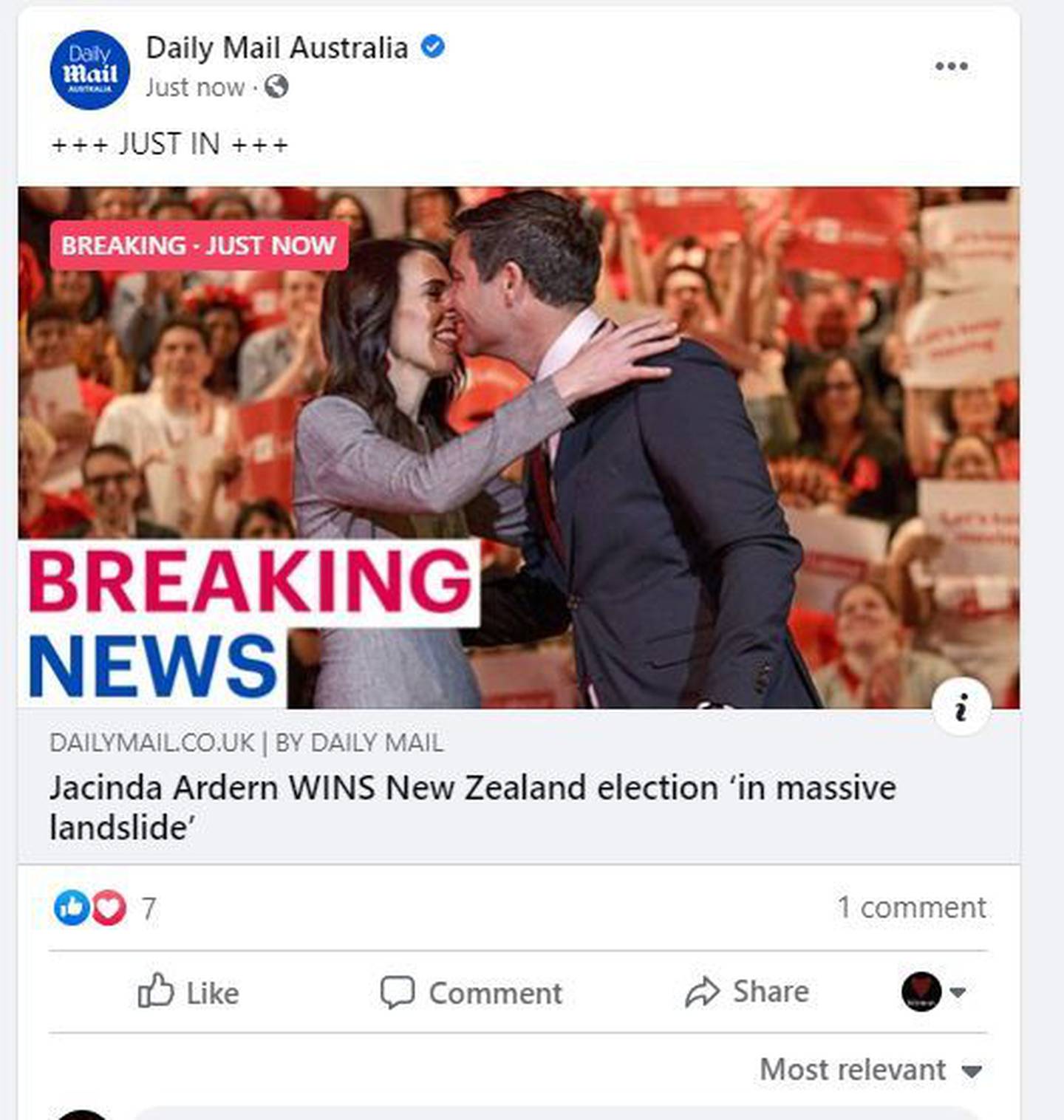 Meanwhile, The Australian newspaper said the result was a "disaster" for Judith Collins, have previously warned their readers ahead of the election result that "Australia should brace for a harder diplomatic punch from the Labour-Green Government on ­climate change, as well as on environment protection and refugee policy."

In the UK, Labour MP Lisa Nandy said that Ardern's victory was "an inspiration around the world".

Congratulations @jacindaardern and all our friends in the New Zealand Labour Party 🎉. For so many reasons, an inspiration around the world and deservedly making history today 🇳🇿 #NZElection2020 pic.twitter.com/uLLeHDCMoe

Mayor of London Sadiq Khan congratulated Ardern, tweeting: "I look forward to continuing our special relationship based on our shared vision for an inclusive, fairer and greener future."

My warmest congratulations to @jacindaardern on your re-election as Prime Minister of New Zealand. I look forward to continuing our special relationship based on our shared vision for an inclusive, fairer and greener future. pic.twitter.com/ydBUazSKNv

The New York Times said that Ardern had been "validated at home" by the results, noting that her "science-and-solidarity approach to the coronavirus" has won her many fans overseas.

"The global left (and a chunk of the centre) has fallen hard for Prime Minister Jacinda Ardern of New Zealand," the Times wrote, adding that the global adoration gives her "a prodigious presence for a leader who manages a smaller population than many mayors do. Now her country's voters have come around as well."

Clarke Gayford's trip outside to feed the waiting media pack was popular on social media, with one BBC reporter asking if New Zealand could "run the world".

The partner of NZ leader Jacinda Ardern comes to feed journalists outside their house on election night and they have a lovely chat about his daughter, parents, mowing the lawn and fishing. Can New Zealand just run the world please? https://t.co/IHgrMH5dne

Others were eyeing up Aotearoa as a new home, with tweets flooding in from around the world from those keen to make the move.

Let's just all buy a boat and move to New Zealand, self isolate for 2 weeks in Hobbiton if we have to.

This who we need right now.... Or we all move to New Zealand. She is an inspiration.... https://t.co/Z9ZpKOQvll