Prime Minister Jacinda Ardern has sacked Iain Lees-Galloway as a minister over an inappropriate relationship with a staff member in one of the departments he headed.

Ardern said the allegation related to an "inappropriate relationship" with a former staffer that had spanned a year.

His political career is now over and he will not contest September's election.

Lees-Galloway, 41, said in a statement that he had "acted completely inappropriately in my position and can not continue as a minister". 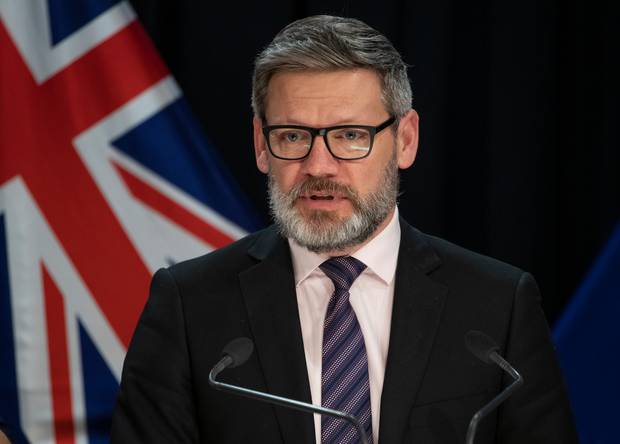 Lees-Galloway - who is married with three children - had told Ardern it was a consensual relationship that had ended several months ago.

Ardern said she had lost confidence in Lees-Galloway as he had improperly used his position of power.

"In undertaking this relationship he has opened himself up to accusations of improperly using his office," she said.

"He has not modelled the behaviour I expect as a minister that is in charge of setting a standard and culture in work places.

"His actions have led me to lose my confidence in him as a minister."

The Prime Minister did not want to identify the woman involved, but added that she wasn't an intern.

"I'm advised at the time the relationship commenced, the woman was not in his office but was in one of his agencies."

She drew a distinction between moral judgments and judgments about the proper conduct of a minister, in this case the Minister for Workplace Relations.

Ardern called Lees-Galloway into her office at 5.45pm yesterday, when he admitted the relationship with a staffer in his office who was based in one of his agencies.

"The minister has shown a lack of judgment over a period of 12 months," Ardern said.

This made his position as a minister "untenable".

The issues were the effect of the lack of judgement on the culture and relationships in the workplace, given Lees-Galloway's ministerial portfolios, Ardern said.

Asked about whether she was aware of rumours about Lees-Galloway, she said she didn't want to act on rumours and had acted on an allegation that had been confirmed.

"We all have a role to make sure we maintain standards in this environment," she said when asked whether this showed poor behaviour among politicians.

She said she would have acted in the same way regardless of how the information had come to her.

Asked about whether it was now open season on MPs' affairs, she said it was the inappropriate use of his ministerial office that was the compelling factor in this case, and also the fact he held the Workplace and Safety portfolio.

Ardern wouldn't be drawn on whether affairs were all a matter of conduct unbecoming, saying that she will deal with the particular circumstances, which is what she had done in this case.

"At any point where I have things that concern me, I deal with them in an appropriate way, but I don't want to be drawn into hypotheticals or rumours without substance."

Ardern said this had happened in a highly-charged political environment, but Lees-Galloway's behaviour was out of line for a sustained period of time.

"I accept the Prime Minister's decision and apologise absolutely.

"I have acted completely inappropriately in my position and can not continue as a Minister.

"I have apologised to my family for letting them down. Please appreciate their privacy.

"I also apologise to anyone who has been hurt by my actions."

Iain Lees-Galloway will step down as an MP at the election. No further comment will be made today.

Ardern called her unscheduled 11am press conference after National leader Judith Collins revealed today that she had forwarded information about alleged "inappropriate behaviour" by a Labour minister to the Prime Minister.

Ardern said the email did not come from the woman in question herself, but from a third party, nor did she know the third party personally - but that was immaterial.

The third party sent the information without the woman's knowledge, Ardern said.

Asked about whether she would ask her other ministers, Ardern said there was a "constant expectation" around ministers' behaviour. The father of three has been in Parliament since 2008.

Lees-Galloway has previously been in hot water over his botched handling of Czech drug-smuggler Karel Sroubek's immigration case.

The minister stood by his original decision to grant Sroubek residency even after after a review concluded there were "powerful" reasons to deport him.

The review, conducted by Mike Heron QC and released in October last year, was ordered in the wake of Lees-Galloway's controversial decision to grant Sroubek residency despite a conviction for drug-smuggling and an admission that he used a false identity to gain a resident visa.

Lees-Galloway revisited the case after it emerged that Sroubek may have travelled back to the Czech Republic, and eventually issued a new deportation notice to Sroubek, who remains in a New Zealand prison.

The Heron review found that the Immigration NZ processes were adequate but could be improved.

It said that ministers applying absolute discretion may have limited time and did not usually receive free and frank advice on deportation cases - though Ministers were also free to take more time and seek further information.

"It is obvious to state that a process which allows a Minister to make a quick decision on a complex case with as little as an oral briefing and no advice is fraught with risk," the review said.

The risk could be mitigated if more decision-making was delegated to experienced experts, which would keep the minister "above the fray".