Moving Auckland to alert level 1 tonight instead of on Wednesday would have saved an estimated $28.5m in economic losses, Treasury estimates.

New Zealand First is understood to have raised questions with the Prime Minister's Office on Friday about the possibility of easing restrictions in Auckland from 11.59pm tonight.

Today Prime Minister Jacinda Ardern said she did not consider calling a Cabinet meeting on Friday to discuss that possibility because Cabinet had previously agreed for the city to be in alert level 2 for two weeks - or one full incubation period.

Cabinet met this morning and Ardern confirmed this afternoon that Auckland's level 1 move would kick in from 11.59pm on Wednesday.

Needing to wait until then was also because of a legal requirement for at least 48 hours' gazetting notice before a Government order changing alert levels can come into force.

A fortnight ago non-Aucklanders were moved to level 1 within hours of Ardern announcing it was safe enough to do so, but that was because Cabinet had made an in-principle decision to make that move a week earlier.

"We didn't want to make that in-principle decision [to move Auckland to level 1 tonight]," she said.

"It was about seeing through that additional cycle of the virus, which takes us through to Wednesday, but also of course about gazetting."

She said Cabinet also wanted to look at the latest test results from the more recent cases associated with a chartered flight from Christchurch to Auckland on September 11; the last such case tested positive on September 23.

She said there was a high level of confidence that those cases, as well as the 179-case cluster, were both contained, confirming modelling by Te Pūnaha Matahini that there was a 95 per cent that Covid-19 had been eliminated.

There had been no new cases in the cluster for 12 days, and only six community cases are still to recover.

Today there was one new case of Covid-19, but contained in managed isolation.

Level 1 means no limits on gatherings and the removal of social distancing requirements in restaurants and bars. Masks are not needed but Ardern said people are free to wear them if it makes them feel safer.

Ardern warned against complacency, asking people to scan QR codes, stay home if sick, and get tested if feeling even slightly sick.

Only about a quarter of Kiwis were scanning QR codes, she said, and the number of scans had halved to one million in past week from a peak of two million.

"Scan in everywhere you go, and remind the people you are with to do the same."

She said indicators including building consents and card spending had been relatively high while restrictions in Auckland were in force, but acknowledged the economic pain for hospitality, retail, tourism and the arts in particular.

"When we quickly stamp this virus out, our economy can return to close to normal sooner."

Treasury estimated the economy was operating at between 90 and 94 per cent with Auckland at level 2, she said.

A spokesman from Treasury confirmed that amounted to about $100m a week, or $14.28 million a day.

She said that saliva testing, which is being touted as much cheaper and capable of returning a result within 15 minutes, could be a game-changer but it needed to be as reliable as the nasopharyngeal swab test.

"We require very sensitive testing because of our [elimination] strategy. We can't afford to let one positive result through the net."

Public health experts have said it could be useful in future outbreaks because of the quick turnaround compared to the current test, which can take days to come back. 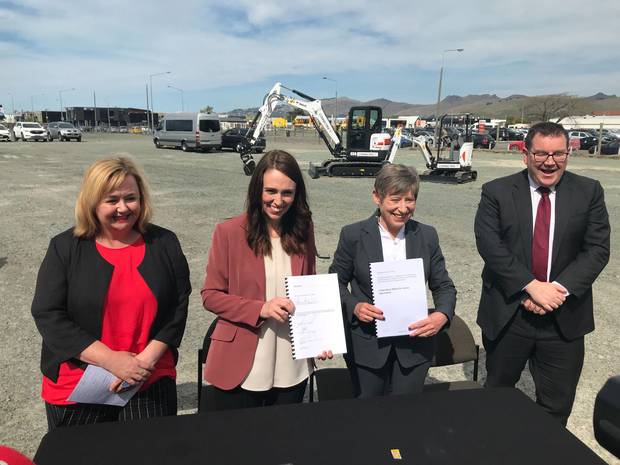 Ardern praised Kiwis, and Aucklanders in particular, for their efforts in stamping out the virus once again.

"I know for many, this one has felt harder, especially for Aucklanders," she said.

"Despite that, Aucklanders and New Zealanders stuck to the plan that has worked twice now and beat the virus again.

"Our team of five million, a little more battle-weary this time, did what our national teams do so often: we put our heads down and we got on with it."

Later today she visited a site in downtown Christchurch where a 25,000-seat all-weather stadium will be built.

The $473m funding, of which $220m will be paid by the Crown, had already been announced but was signed off today in front of local MPs, councillors, and Crusaders halfback Mitchell Drummond.

Ardern said that such venues were pillars of the community, not just for sports but also concerts and events in general that brought people together.