National leader Judith Collins has got in on the early voting action casting her ballot in Auckland's Tāmaki electorate.

Collins, who stands in the Papakura electorate, lives in Tāmaki, a seat comfortable held by National MP Simon O'Connor.

She arrived about 11am to place her vote at St Thomas Tāmaki, stopping in the chapel to offer a prayer before going in to vote. 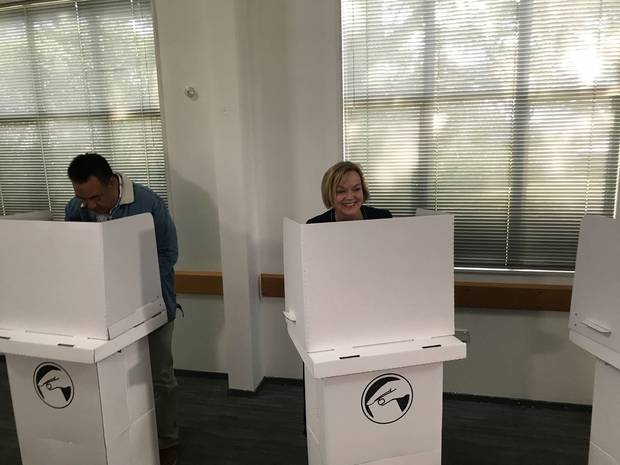 In 2017, National also won the largest share of Tāmaki's party votes with 62 per cent compared to Labour's 25 per cent.

None of the five other candidates have been in parliament before.

Meanwhile, Collins remains a clear favourite to be re-elected to her Papakura seat, which she's held since 2002.

In 2017 National also won the largest share of party votes with 51 per cent compared to Labour's 34 per cent. However, boundary changes this year mean the electorate has changed significantly, gaining the north-eastern part of the former Hunua electorate.

She was joined by her fiancé Clarke Gayford, who also voted for Labour and Ardern - she is the local candidate in Mt Albert.

"He didn't get a choice," Ardern joked as the pair left the voting station.

The Electoral Commission's Chief Electoral Officer Alicia Wright has said early voting could make up 60 per cent of the total overall number of votes. In 2017, early voting was 47 per cent.

The commission has been encouraging people to get out early and vote. The last day of the voting period is October 17.

Covid-19 significantly changed the plans for the election, which was initially scheduled for September 19.

The election results will be made known as they come through on the night of October 17.

But the initial results of the end of life choice and the cannabis referendum won't be known until October 30 – and the full results will not be confirmed until November 6.