"In memory of the 51 Shuhadah [witnesses] who lost their lives."

So said the words inscribed on a memorial plaque that Prime Minister Jacinda Ardern unveiled this morning at Al Noor Mosque in Christchurch.

The Labour leader is campaigning in Christchurch today, where she will do a walkabout as well as visit two venues in her capacity as Prime Minister, including the mosque and Rāwhiti Domain Canopy in New Brighton.

The canopy is one of nine projects that has been approved for $7 million from the Government's $3 billion shovel-ready infrastructure fund.

"It is hugely disappointing to see that change in position from them," she said when it came to National's climate change position.

She said it was "very disappointing" to see National want to unravel all the work the Government has done on cleaning up New Zealand's waterways.

She said National was coming in "late to the party" when it comes to the changes they are proposing.

She said in a modern New Zealand, no one should be discriminated against because of religion.

Asked about stronger hate speech laws, Ardern said the Government needs to continue to record when these incidents occur.

The Government hasn't been able to progress hate speech law in this term of Government, but it will be campaigning on this as a Labour Party.

Meanwhile, Woods said it was important the Government keeps working with the Muslim community in Christchurch to make sure the 51 who died are remembered.

"I am confident we will find something that satisfies their desires," Ardern said on this.

She said New Zealanders reject any idea that people should be discriminated against because of their religion or their ethnic background.

"It's just not okay," she said, adding that "change needs to occur."

On Covid-19, she said because New Zealand has been so free of Covid, we haven't seen many historic cases of Covid-19.

She said, on the historic case, New Zealand's borders were not closed.
But she said New Zealand was "very, very quick" when it came to its border closure.

Today was the third time Ardern has been scheduled to unveil the plaque at the mosque.

The first attempt was meant to be at the March 15 memorial this year, which was cancelled because of Covid-19.

The second attempt was scheduled for the second week in August, and was postponed due to the current Covid-19 outbreak in Auckland.

This morning was a sombre occasion as a hijab-wearing Ardern was greeted at the mosque with flowers. 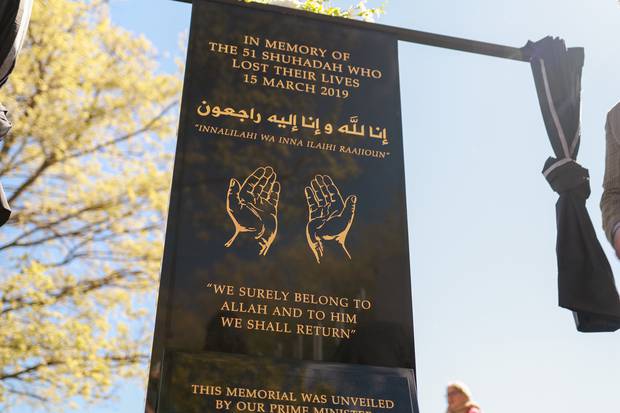 Just before she unveiled the plaque, Imam Gamal Fouda asked for an annual memorial day to be held in Christchurch to mark last year's tragedy.

That darkest of days had left "a scar on our hearts", but the true legacy was the peace and compassion in the country's response.

The life sentence handed down to Brenton Tarrant was human justice, but "divine justice still awaited him".

He said three more things had to happen for "full justice": To honour the martyrs and victims by remembering them; to inform future generations of what had happened; to embody the calmness and compassion of the response.

He called for a memorial day in Christchurch every year to honour March 15 and remember the cohesion and harmony of the response.

"I don't want that to be forgotten."

And he called for political leadership to change the law so that certain types of free speech cannot become the kind of hate speech that can escalate to hate crimes.

The Government has been reviewing hate speech laws but the work has so far not led to any changes.

Ardern is coming off the first leaders' debate against National leader Judith Collins and a 1 News Colmar Brunton poll on Tuesday that had Labour on 48 per cent.

As preferred PM, Ardern was on 54 per cent - holding her high popularity from the previous poll in July. Collins had dropped slightly from 20 to 18 per cent.