The South Island is being battered by heavy rain and strong winds as forecasters warn areas that are already waterlogged are in the firing line again.

Rocks Rd (SH6) near Nelson is closed after flooding caused by heavy waves - it is the coastal road between Tahunanui and the port.

An NZTA spokesperson said the road is closed between Bisley Ave and Russell St. Motorists should detour via Whakatu Rd and Waimea Rd. 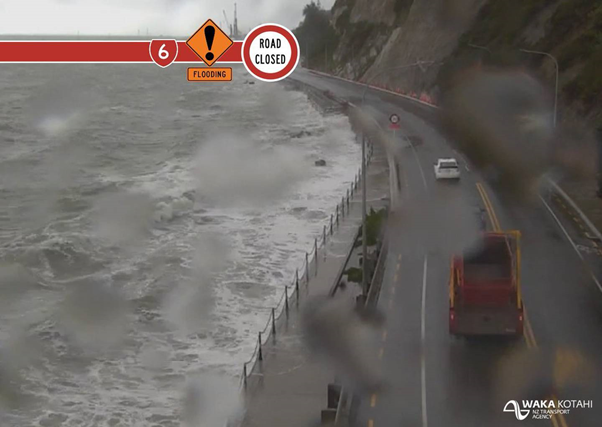 "Please note the detour is not suitable for heavy vehicles."

State Highway 6 between Kohatu to Glenhope was closed due to fallen trees caused by high winds but reopened at about 9.30am.

Contractors have since cleared away debris and ensured the road is safe for motorists.

A Waka Kotahi spokesman says the road will be managed with stop/go controls while it is down to one lane.

While the rain in the south won't be as heavy as last weekend's deluge, forecasters are warning food-hit areas are in the firing line again.

MetService has heavy rain warnings in place for parts of Nelson and Westland, where up to 150mm of rain could accumulate about the ranges.

Streams and rivers could rise rapidly and surface flooding and slips are possible, the warnings say.

A strong wind warning is also in place for parts of Nelson west of Motueka, Buller and Banks Peninsula.

The warning - which could potentially see northeast gales become severe in exposed places - will remain in place until this evening.

He said the strong wind will continue - especially until about 10am.

The NZTA is warning those northwest of Nelson and through Marlborough to take extra care this morning as they set off for work.

"Drive to the conditions and be aware that there could be slips, surface flooding, or debris on the road which will be hard to see overnight.

"Our crews will be out and about monitoring the roads but we need everyone to take extra care," a spokesperson said.

🌧 Heavy rain moving onto the country 🌧

Heavy rain is due for inland Marlborough, the Tasman district and parts of Buller, where the ground's already saturated.

"Our emergency response teams will continue to monitor already compromised areas and we will continue to liaise with MetService and Niwa for the latest weather information," incident controller Dean Heiford said.

Torrential rain in the region last week saw the Buller River topping its banks and flooding Westport. The "one-in-100-year" flood event left many people homeless, and more than 100 homes unliveable.

Niwa is forecasting "extremely high river flows" in response to the forecast heavy rain over the top of the South Island and is warning people to never drive through floodwaters.

The incoming poor weather is due to an active front that would hit Fiordland and the West Coast before moving up over the top of the South Island overnight, Corrigan said.

Strong wind watches are also in place for much of the North Island, Banks Peninsula and the Canterbury high country on Monday.

MetService meteorologist Dan Corrigan said most of the country would be affected to some extent.