Cows killed as raging floodwaters invaded the Buller District are washing up on the beach and riverbeds around Westport.

Contractors are out in the area with diggers removing the carcasses from the sand and sodden banks but the clean up effort is slow going.

It is still unclear how many animals were lost on farms in the area when the floodwaters rose to unprecedented levels at the weekend.

Authorities say one farmer lost upward of 700 cows and other properties may have suffered similar losses.

Mayor Jamie Cleine said he was aware of up to 1000 animals that had been lost.

Cleine, a farmer himself, said the situation was "concerning".

"It will be devastating for some - for some it's whole herds or close to it.

"And at this time of year it will likely be all heavily pregnant dairy cows."

Cleine was yet to investigate the damage to the rural sector.

He was focused on the township where about 1000 people were waiting for news about when and if they can go home.

He expected "the bulk" of those displaced would be able to go back to their properties this afternoon after rapid assessments had been completed.

But that was under the caveat of them taking care in houses filled with contaminated water - while structurally sound, hygiene and health safety may be an issue.

Cleine said the loss of stock was still being assessed. 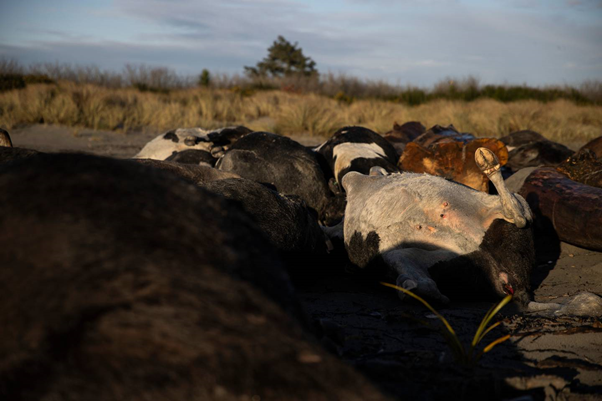 The cows are likely pregnant dairy cows and may be whole herds. Photo / George Heard

"As the mayor, and as a farmer myself, I am concerned for the rural community - but my focus has been on the town centre and getting that up and running.

"I'd like to get out and about and check farmers are doing okay as well."

The Herald has reached out to the farm owner who lost the most stock.

He said he couldn't talk about the situation yet.

Many of his cows were seen on the northern section of Westport Beach.

There are hundreds of animals lying dead on the sand.