The New Zealand Warriors had a tough time at the office in their clash against the South Sydney Rabbitohs in a 40-12 thrashing at Bankwest Stadium.

Down 22-6 at the break, the Rabbitohs scored four tries to one but the Kiwis found themselves unlucky with a high shot ignored by the officials late in the first half at a key moment.

Down 18-6, try scoring magician David Fusitu'a return for his 99th first grade match and after one try already was hungry for another one.

Getting the ball out wide with six minutes remaining in the first half, Fusitu'a looked destined to score but was stopped by a high shot from Latrell Mitchell.

With the Rabbitohs fullback rushing across, the Fusitu'a stepped back on the inside with the arm clocking the winger high and hitting his head on the ground with the ball coming out of the stunned winger's arms.

While he laid on the ground and was checked by the trainer, the wait was too long for the Warriors to review, meaning it came back out for a scrum.

Fox Sports commentator Brenton Speed even believed it could have been a penalty try.

"Here comes Latrell Mitchell, whack on the head - you OK with that?" he asked Steve Roach.

"He was desperate to try and get him to stop, he stepped back inside and slipped a bit," Roach said. "It was high."

The camera cut to Warriors coach Stephen Kearney who appeared to be saying "that's a high tackle". 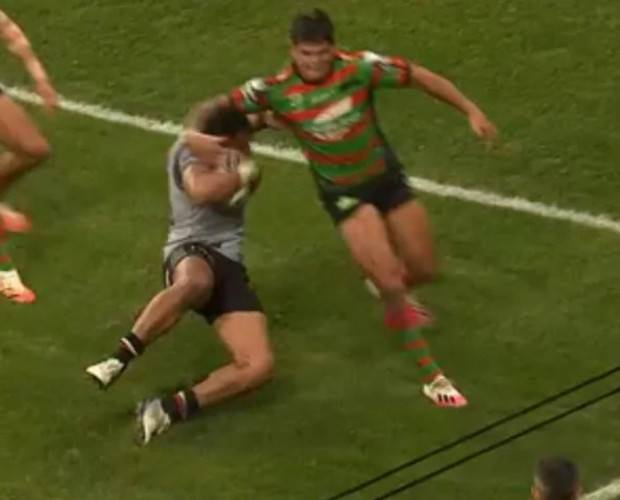 Speed continued: "That's a penalty isn't it? That's almost a penalty try, because he stopped him with a high tackle, he's going to score if he doesn't tackle him high."

Roach said he wasn't sure Fusitu'a was certain to score.

At halftime, Greg Alexander said "it was a penalty" but Corey Parker responded incredulously "they didn't get anything".

Post-match, Warriors coach Stephen Kearney said he was "frustrated" and "disappointed" in his team's effort but had special mention for the referees.

"I thought there were a few decisions tonight, and it's a bit hard when you're on the back of a belt but I don't think there was a six again in the last 30 minutes, David's, there was a number of them," he said. "Again, when you're on the end of a belting it's a bit hard to point fingers but we just could not get anything. And like I said, we created opportunities for ourselves and we didn't execute well when we needed to but jeez."

Asked specifically about the Fusitu'a high, Kearney said "he's not in a good way", having failed the head injury assessment (HIA).

"I didn't think you could hit the head of a player, the back of the head too," he added. "But I don't want to sound like I'm blaming the officiating because it was one minor issue of a number of issues tonight."

But fans - and the Warriors' social media account - were blown away by the decision not to even give the Warriors a penalty.

The bigger issue came just five minutes later when Alex Johnston slid over in the corner after a perfect pass from Mitchell to make it 22-6 at halftime.

The game could have been much closer if the Fusitu'a shot had been checked but it just got worse from there with Souths running in seven tries to two for its first back-to-back win of the season, and moving into the top eight.

But the high tackle wasn't the only issue the commentators had with the referees in the match with a strip early in the second half being called a knock on despite it being "reefed out".

"100 per cent it was raked out, the referee was right there - what's the touchy doing?" Roach said.

"They're missing a bit tonight but it's moving along pretty quickly," Speed added. "It's not easy to adjudicate on the run."