Bledisloe Cup kept. Wallabies kept to nil. Job done for Steve Hansen and the All Blacks at Eden Park. Actually, more than that: vindication.

The head coach was under a bit of scrutiny this week before his 100th test in charge of the All Blacks, no doubt about it. Was this game plan right? Was dropping the experienced Rieko Ioane and Ben Smith right? What about the dual playmakers? The loose forward trio?

All of those questions were answered, including the question about whether this team is too old and on the decline. Not on this evidence – not when they play with energy and enthusiasm and an intensity which at times threatened to strip the wet grass off the pitch in front of an increasingly raucous crowd of 48,000.

No, when they needed to show something they haven't so far this year, they brought the full monty. It made Hansen proud, an emotion that shone through strongly afterwards.

"We had to respond to a performance last week that we would all say wasn't good enough from our point of view and an exceptional one from Australia," he said. "It's a long time in sport, seven days, and I'm very proud of them.

"We got toweled up last week and I'm not sure any All Black has enjoyed that experience." 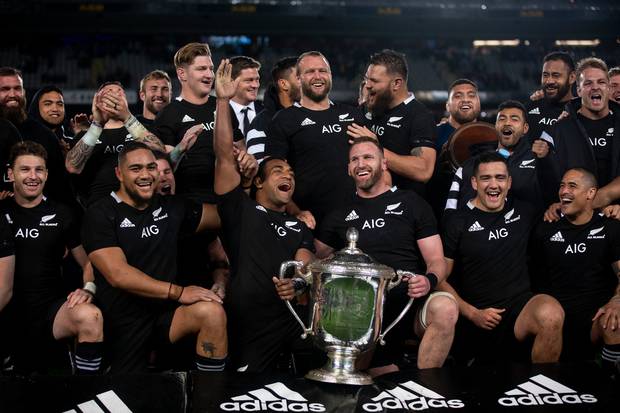 The All Blacks celebrate with the Bledisloe Cup. Photo / Dean Purcell

One of the most pleasing things for Hansen will be how all of his men responded; not only his pack, who shoved their opposites around with relish, and not only his playmakers Richie Mo'unga and Beauden Barrett, but also his new and inexperienced wings George Bridge and Sevu Reece, and his replacements off the bench.

"You don't put people in your team if you don't expect them to be able to play like you think they will," Hansen said about Bridge and Reece. "I think everyone saw what happened, they both played very well."

All of the bench provided an impact and few will be happier with his return than Jordie Barrett, the utility back who went to fullback after replacing the injured Mo'unga and added a real spark. If Jordie's place on the plane to Japan in a few weeks was in doubt, it probably isn't now.

Another is Patrick Tuipulotu, a lock under a bit of pressure to play to his size – and he is a big man. He did that, including ringing Kurtley Beale's bell in the second half with a front-on tackle the Wallabies fullback might still be feeling in a few days. The Blues second-rower may have just booked himself a ticket, too.

Sonny Bill Williams, excellent on his return to second-five after missing last weekend, said afterwards there were a few backs to the wall this week after some tough conversations. With that can come tightness, but here all of Hansen's men expressed themselves to the fullest.

It was a reminder that you can't win tests without doing the basics well, but also that these are extremely talented players under Hansen's control and if they get things right very few teams can stay with them.

What about keeping the Wallabies to nil? Was that some achievement after the record 47-26 defeat in Perth? "It is because they're a very good attacking side as we saw last week."

Defeated coach Michael Cheika said: "It's about being vigilant all the time. If not, they will get you."