The case was heard by a full bench of the Federal Court of Australia on Sunday afternoon which ruled unanimously to deport the Serbian star, ending an 11-day ordeal.

The 34-year-old also faces the prospect of being banned from entering the country for three years.

Appearing on ESPN ahead of the Melbourne-based grand slam tournament, McEnroe took aim at the Australian government for how it handled the "sad" situation.

"It's total BS. If he decides not to have a vaccine and the Australian authorities say, 'You cannot go down there, unless you're vaccinated,' end of story, it's black or white. 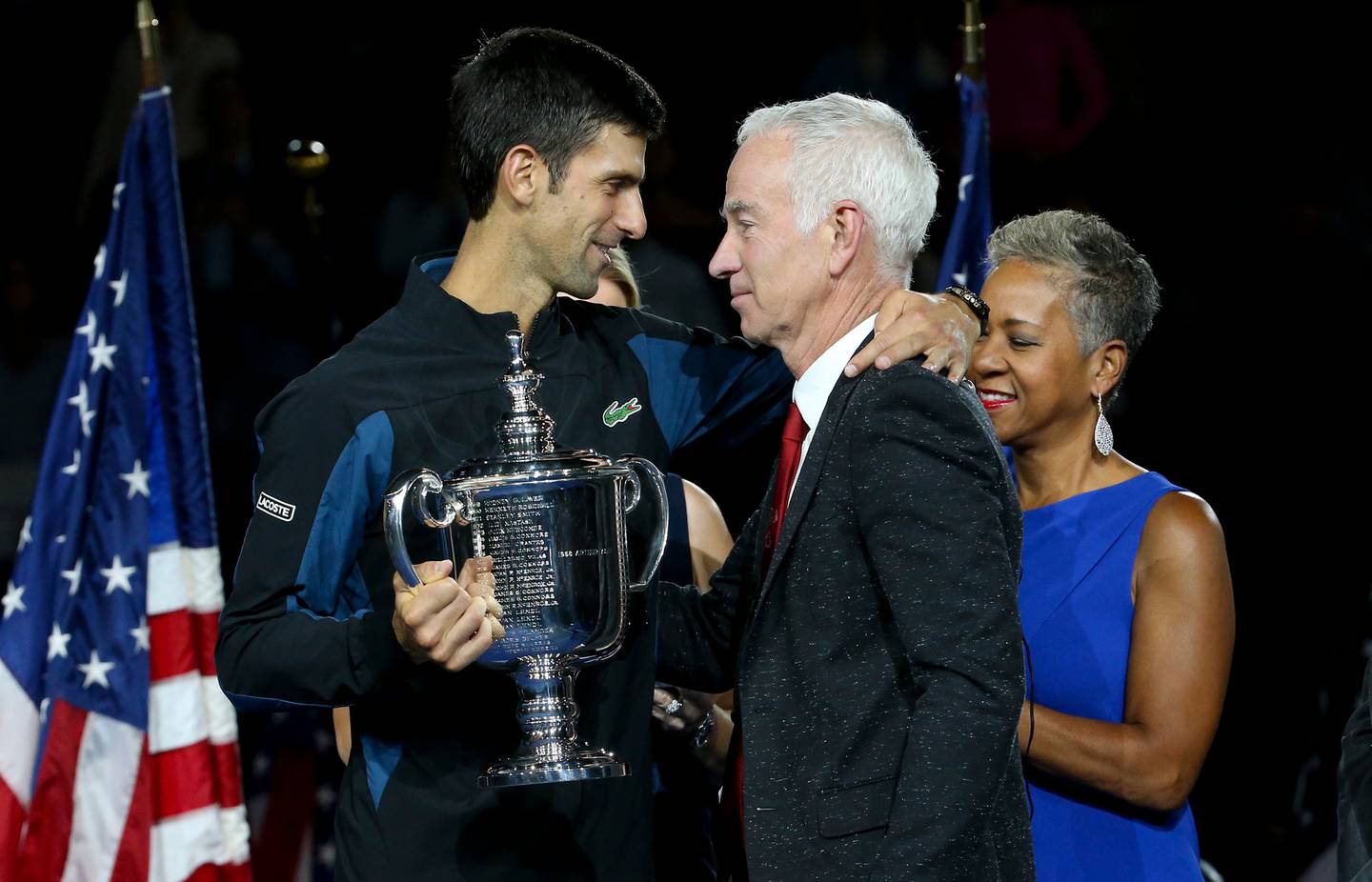 Novak Djokovic receives the trophy from John McEnroe during the trophy ceremony following the men's final of the 2018 US Open on September 9, 2018. Photo / Getty Images

"He decides whether or not he wants to do it. He's got very strong beliefs he's entitled to those beliefs.

"The guy's won it nine times. I've got to hand it to him. I've got seven majors, he's got 20, the reason he's got a lot more than me is because he's willing to go risk that, to go down there.

"You're talking about a guy that was potentially about to break Roger Federer and Rafael Nadal's record and that he was willing to go to these lengths, 'I don't want to get vaccinated but I'm going to do whatever it takes'."

McEnroe then appeared to suggest that journalists fabricated reports that Djokovic conducted an in-person interview with French newspaper L'Equipe despite knowing he had tested positive to Covid-19, despite the Serbian confirming those reports last week.

"Here's the other part that's weird," McEnroe said. "Djokovic apparently … and listen, I'm a fan of Novak and I have a lot of respect for him … but supposedly he knew he had it, and then he flew back and went to Serbia and that's not what you're allowed to do.

"And then he met with some journalist, allegedly … that he spoke to a journalist, in Serbia I believe, I don't know the exact details of the dates … is that proven, is that absolute fact? "You know journalists have been known to make …"

The 62-year-old was promptly interrupted and corrected. Novak Djokovic practices on Rod Laver Arena ahead of the Australian Open tennis championship in Melbourne on January 12. Photo / AP

McEnroe also questioned why Djokovic, who believed he had been granted a medical exemption to taking the Covid-19 vaccine, was permitted to travel to Australia.

"Ok, let's assume that he wasn't going to play but then suddenly he got Covid and then he got an exemption and he can play. You can't tell him after he flies all the way there," he said.

"The idea that the government and these people weren't in cahoots with each other. I'm sorry. I don't buy into that one. They all knew what was going on.

"That's why people are up in arms, but nonetheless they granted this exemption. You can't do this after that, it's a joke."

On Sunday, Djokovic released a statement saying he was "extremely disappointed" by the Federal Court's ruling that upheld the Australian government's right to rip up his visa over fears he is stoking anti-vaccine sentiment.

"I am extremely disappointed with the ruling to dismiss my application for judicial review of the decision to cancel my visa, which means I cannot stay in Australia and participate in the Australian Open," he wrote.

"I respect the Court's ruling and I'll co-operate with the relevant authorities in relation to my departure from Aus.

"I am uncomfortable that the focus of the past weeks has been on me and I hope that we can all now focus on the game and tournament I love. I would like to wish the players, tournament officials, staff, volunteers and fans all the best for the tournament.

"Finally, I would like to thank my family, friends, team, supporters, fans and my fellow Serbians for your continued support. You have all been a great source of strength to me."

"They think that they have by this, this mistreatment of 10 days humiliated Djokovic, but they have humiliated themselves," Vucic told a state media outlet. "Djokovic can return to his country with his head held high."

Djokovic was scheduled to get his Australian Open campaign underway at Rod Laver Arena on Monday evening, but world No 150 Salvatore Caruso has replaced him in the men's singles draw.