New Zealand shot putter Tom Walsh has already etched his name into the annals of sporting history courtesy of two Olympic bronze medals, but you can now add a surprising record to his list of achievements.

Walsh took out his second consecutive Olympic bronze medal on Thursday after throwing a season's best distance of 22.47 metres in the final. However, that performance wasn't enough to topple the Unites States' two powerhouse performers Joe Kovacs and Ryan Crouser; the latter throwing an Olympic-record distance of 23.30m to claim the gold.

It turns out, this is a familiar situation for Walsh but one that is incredibly rare for the sport of athletics.

At the 2016 Rio de Janeiro Olympics, Crouser also threw an Olympic best distance - at that stage it was 22.52m - to leave countryman Kovacs with a silver medal. And right behind them was Walsh. 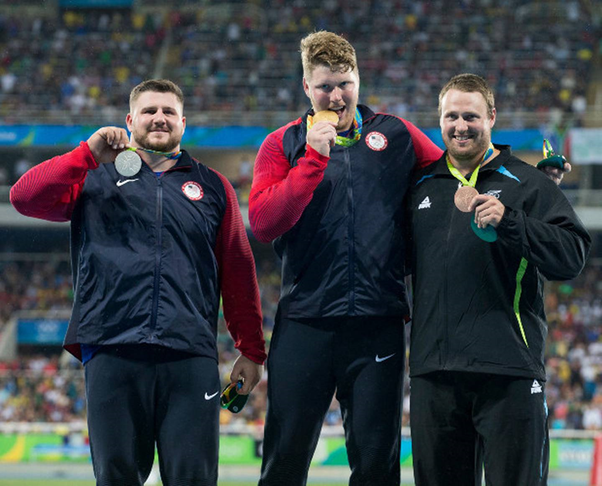 The repeat of a podium at an individual athletics event has never happened before, making Walsh not only a double-Olympic medallist but now a part of pub-quiz trivia questions for years to come.

Incredibly, there was one other part of the men's shot put to repeat in exactitude from 2016 to 2021. Fellow New Zealander Jacko Gill finished in ninth place in the finals of both years.

For Walsh, the experience of clinching another bronze medal brought tears to his eyes as he was interviewed after the final, relaying how hard a road it had been for him between Games.

"It feels awesome," said Walsh. "The last 18 months, for everyone, it hasn't been easy. And to be standing here now with the flag on my back, it's pretty cool."

Official - has never happened before in Olympic athletics - men's shot put is the first time to have the exact same repeat of a podium https://t.co/m89HfENjjN