United States gymnast Simone Biles has elaborated on her reason for withdrawing from her events at the Tokyo Olympics, and pushed back against the critics who have accused her of "quitting".

Biles answered questions from fans on her Instagram account on Friday, and shared footage from a training session to illustrate her struggle with a phenomenon called the "twisties".

That term requires some explanation.

Gymnasts usually know exactly where they are while they're flipping and twisting through the air. When the twisties strike, they lose that awareness. Suddenly they have no idea where they are or, crucially, where they'll land.

This isn't like a cricketer suddenly forgetting how to play a cover drive, or a tennis player losing her ability to read the spin on the ball. It's extremely dangerous, because it puts the gymnast at risk of landing badly and suffering a catastrophic injury.

This week, one former gymnast compared it to losing the muscle memory you use to drive a car – while travelling at high speed in the middle of a highway.

The twisties can hit at any time, for no apparent reason, and they can affect anyone. Even the greatest gymnast of all time.

Biles withdrew from the team final in Tokyo after unsuccessfully attempting to perform two-and-a-half twists off the vault.

She made it through one-and-a-half before getting lost in midair. Somehow, whether through luck or sheer instinct, she managed to land on her feet.

On Instagram today, Biles responded to the people who criticised her decision to withdraw.

"I simply got so lost my safety was at risk, as well as a team medal. Therefore the girls stepped up and killed the rest of the competition and won silver. Queens! Hence why we have four team members because all of us can compete in a team meet, not just me.

"I also have no idea how I landed on my feet on that vault, because if you look at the pictures and my eyes you can see how confused I am as to where I am in the air.

"Thankfully, I landed safe enough, but I also don't think some of you realise I was supposed to do a two-and-a-half and I only completed one-and-a-half twists before it looks like I got shot out of the air.

"We have four on a team for a reason. I chose to not continue team competition (and risk) losing a medal, of any colour, for the girls. Also for my own safety and health.

"For anyone saying I quit: I didn't quit, my mind and body are simply not in sync.

"I don't think you realise how dangerous this is on hard competition surface. Nor do I have to explain why I put my health first. Physical health is mental health." 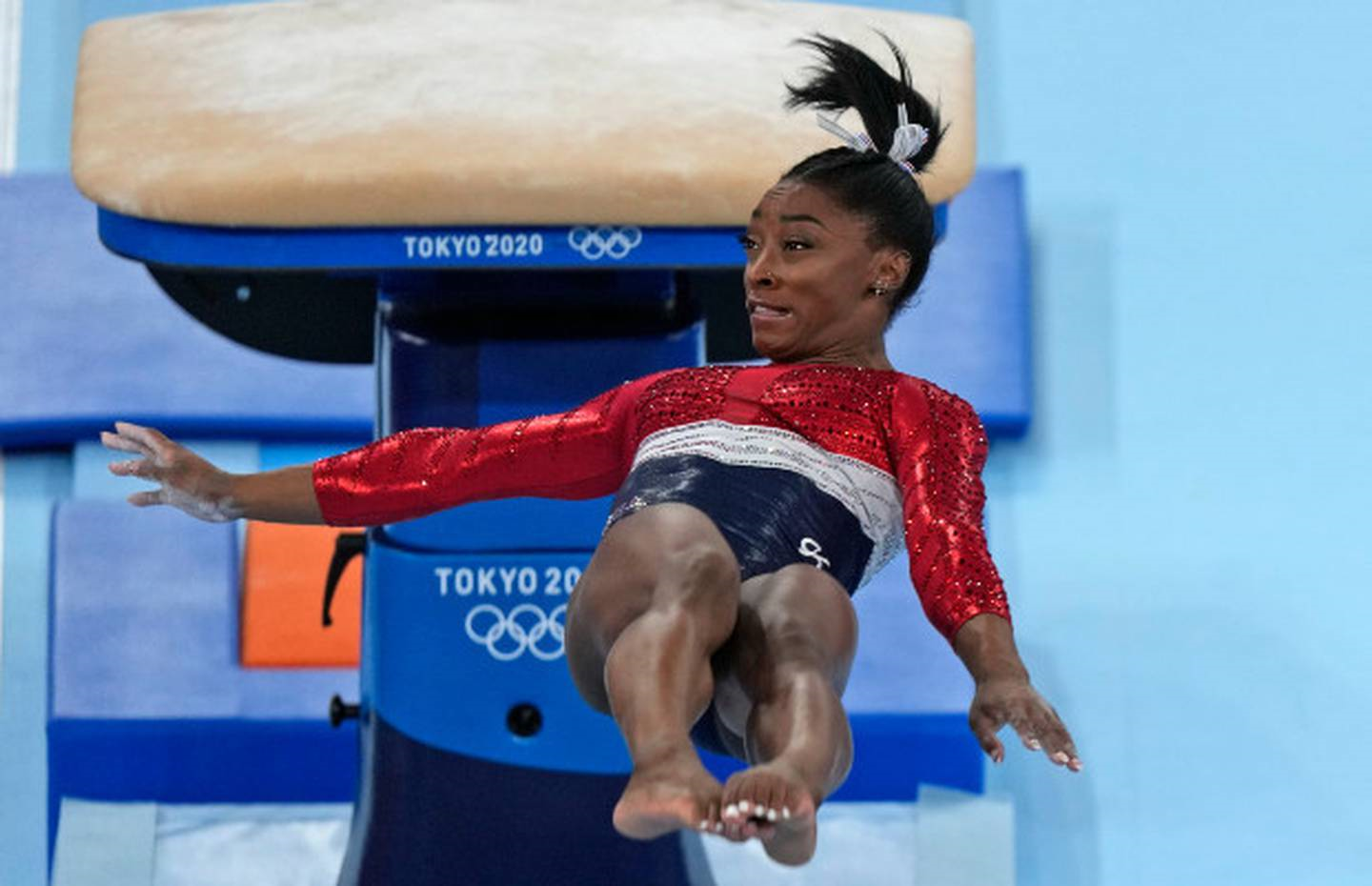 The world is not used to seeing a disoriented Simone Biles. (Photo / AP) Nothing looked comfortable for Simone Biles on the vault in Tokyo. (Photo / AP) 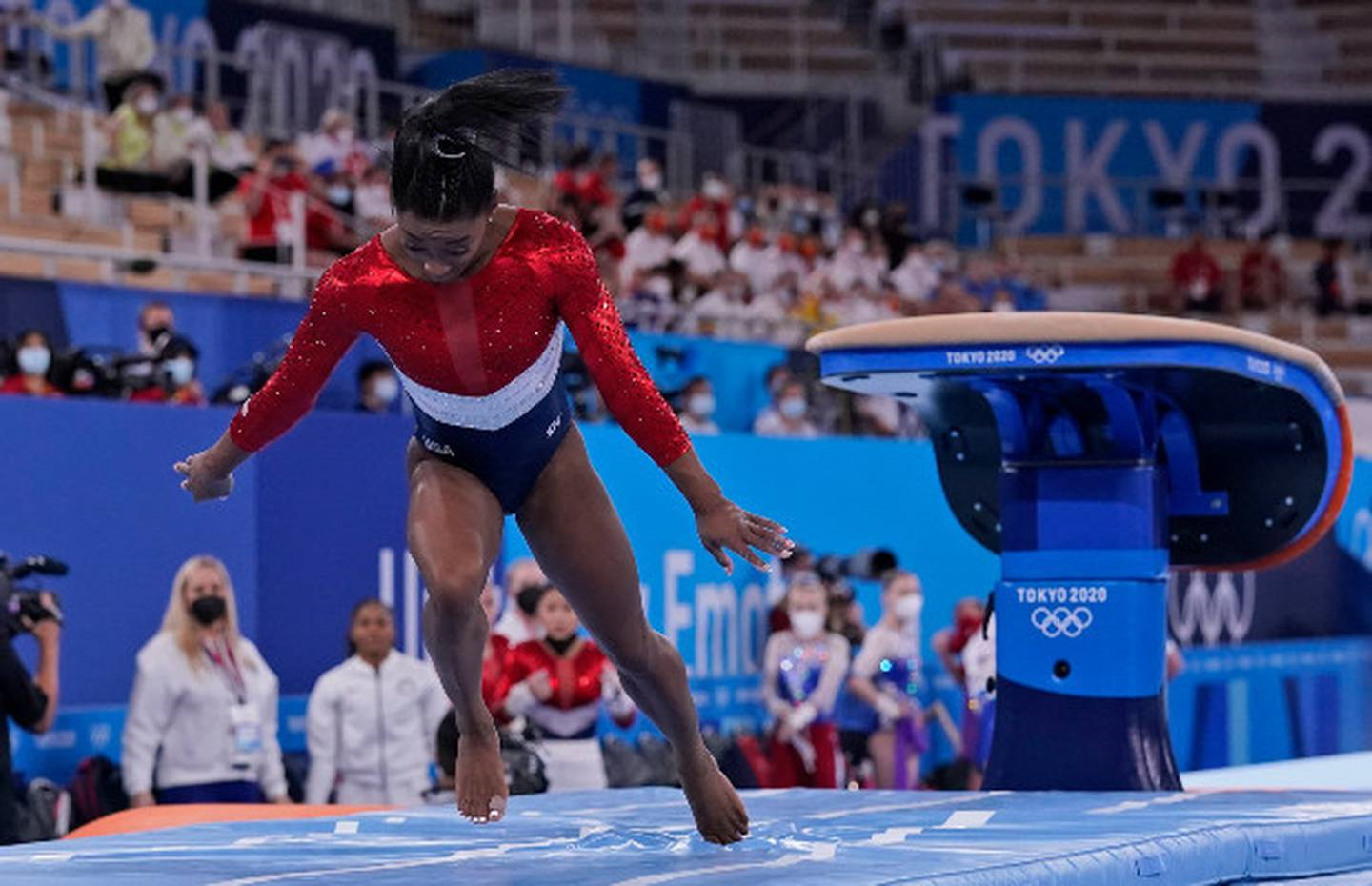 Biles said the twisties "randomly" started to affect her the morning after the preliminary competition.

"This was not happening before I left the USA," she stressed.

She warmed up "OK" in the back gym before the final.

"I was fighting demons but I did it. Petrified too," she said.

"It's honestly petrifying trying to do a skill but not having your mind and body in sync.

"Sometimes I can't even fathom twisting. I seriously cannot comprehend how to twist. Strangest and weirdest thing."

Those demons are still with her. Biles has been going "back to basics" in training since her withdrawal, and doing it with "soft surfaces".

"There is a place here in Japan that has been so sweet to open their doors for me to train," she told her fans, adding that she'd thank the venue "formally" after the Olympics.

She posted two videos, both of which showed her landing on her back while trying to execute a dismount from the uneven bars during training.

In one of the clips she made it through a half twist, and in the other she managed one-and-a-half. She was supposed to do two.

"Literally cannot tell up from down. It's the craziest feeling ever, not having an inch of control over your body," Biles explained.

She pushed back against a fan who told her even her crashes "are adorable".

On her IG stories, Simone Biles responds to people who think she “quit” on her team by explaining the “the twisties” she’s been experiencing and what it feels like “not having your mind and body in sync” …. pic.twitter.com/79hN973rkd

"It only looks 'safe' because I'm on a soft surface. If I was on a competition surface it wouldn't look adorable."

Asked how long it usually takes for the twisties to leave, Biles replied that it "varies".

"Typically for me it's two or more weeks, when I've had them before," she said.

"Honestly, no telling. It's something you have to take day by day, turn by turn."

"This time it's literally on every event. Which sucks. Really bad."