The Oly Whites' run in Japan has come to an end – but in a way that no one could have expected.

Rated as 13/1 outsiders, New Zealand produced an extraordinary effort in their quarter-final, pushing the host nation to the limit, before finally succumbing in a penalty shootout, after the 0-0 deadlock couldn't be broken in extra time.

After Chris Wood had scored New Zealand's first spot kick, consecutive misses from Liberato Cacace and Clayton Lewis left the Oly Whites on the brink, before Japanese captain Maya Yoshida sealed their fate, sliding the ball into the left-hand corner of Michael Woud's net for the 4-2 result.

It was a cruel way to lose for the Kiwis, who rose to the occasion superbly, though on the balance of chances Japan undoubtedly deserved to progress.

But the Oly Whites will depart with their heads held high, knowing they couldn't have done much more.

Given the circumstances, it was one of the best performances by a New Zealand team on the world stage, in the same conversation as those at the 2010 World Cup and the Peru draw in Wellington in 2017, especially as the Oly Whites lost captain Winston Reid in the 50th minute.

Woud produced one of the saves of the tournament, with a sensational point blank stop from Ayase Ueda in the 81st minute, after the forward was left free metres from goal.

But Elijah Just was metres away from being a hero, as his goal-bound shot late in extra time was cleared off the line by Yoshida. 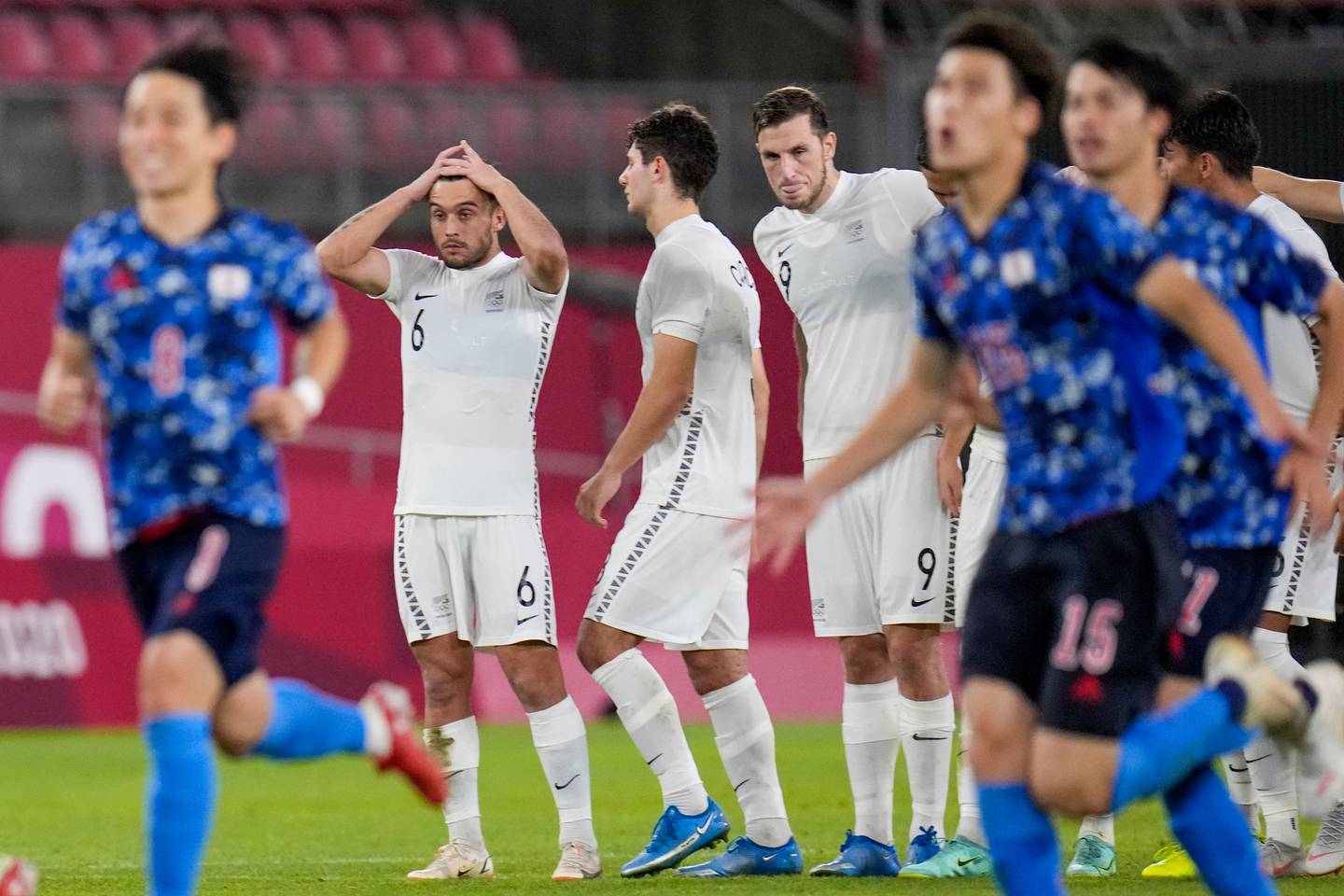 It was a fascinating contest. Japan were impressive – creating at least three gilt-edged chances in normal time – but not as dominant as most had expected, as they tried to weave patterns through the centre of New Zealand's stout defence.

The Oly Whites had some promising periods with the ball, looking more comfortable as the game went on, though they couldn't take advantage of several set piece opportunities, with the delivery usually too close to the goalkeeper.

It was always going to be a massive assignment. Japan had been highly impressive in the group phase, winning every game, including a 4-0 humbling of France. They had been in camp for months, and preparing for years, and had players drawn from Real Madrid, Sampdoria, Bologna, Stuttgart and PSV Eindhoven.

And conditions were brutal, with the 27-degree heat compounded by 82 per cent humidity.

Reid was a late inclusion. The 3-5-2 shape meant a first start for Ben Waine, with Just and Callum McCowatt benched. 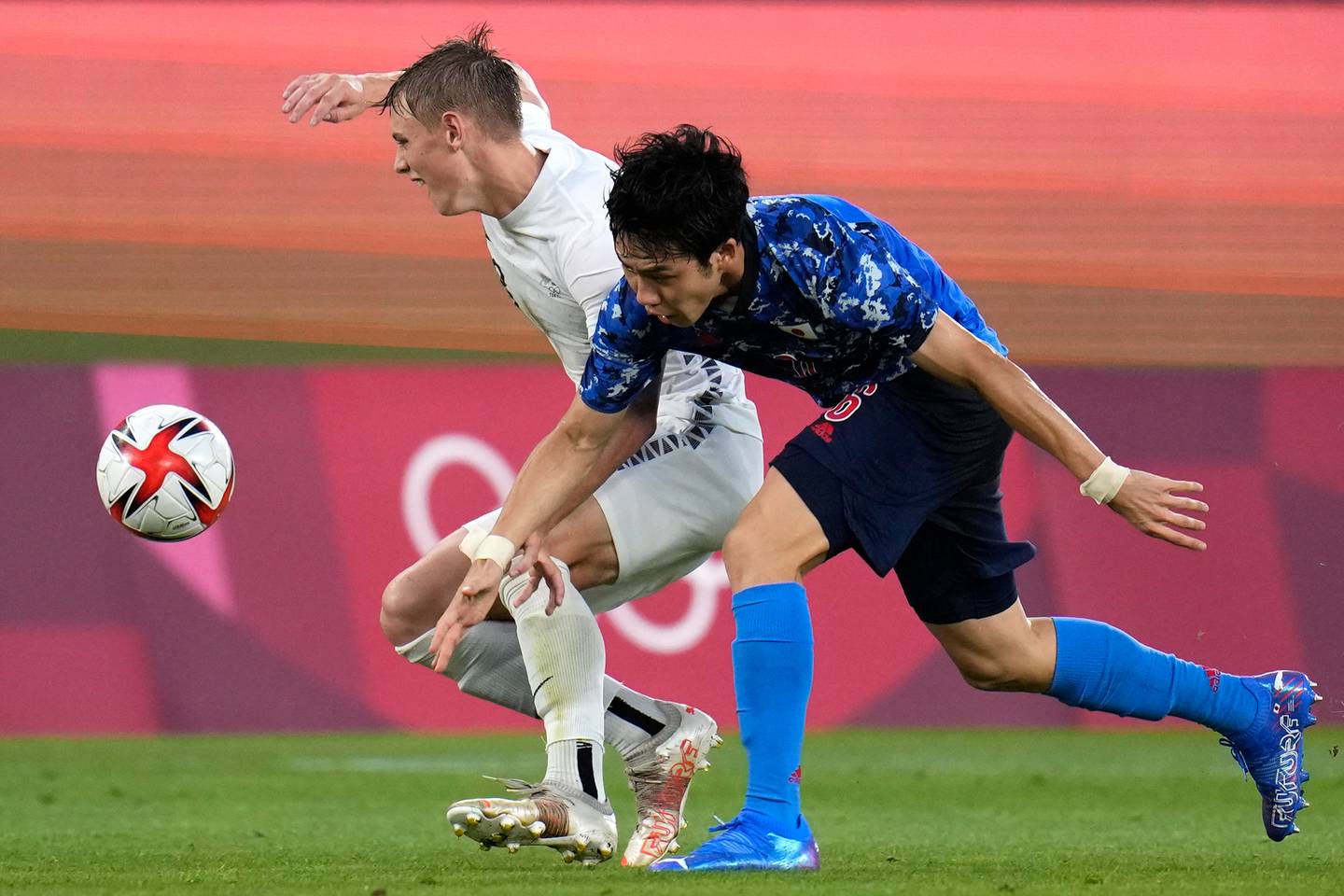 Reid quickly showed his value, with a couple of important interceptions, exhibiting his ability to read the play, before he departed, after another knock to his left knee.

Japan should have taken the lead in the 10th minute. A short corner routine caught the Oly Whites napping, but Stuttgart's Wataru Endo blazed over from three yards when it looked easier to score, as his markers were caught ball watching.

The host nation carved out two more good first half chances, with Ritsu Doan failing to hit the target on both occasions, as the classy Takefusa Kubo, who spent time at the Barcelona academy before signing with Real Madrid, was causing problems out wide.

New Zealand's best chance of the first half fell to Wood, with the Burnley striker lifting his shot over the bar from 10 yards, though the offside flag was raised for infringement earlier in the movement.

McCowatt replaced Reid, as the shape was tweaked slightly. The substitute added to the fluency of play, as New Zealand came into the game more, looking more comfortable in possession, without producing the final ball.

The Oly Whites created some pressure from corners, but the feeling it might be their night was accentuated with Reo Hatate headed over from a deep cross, after completely losing his marker, with Woud stranded.

Just and Dane Ingham entered the fray with 12 minutes to play, as a McCowatt cross was almost deflected into the Japanese net, before Woud's miraculous save.

But there were some nervous late moments in normal time for the host nation too, as the ball fell free, metres from goal in the dying minutes, but no Oly White had anticipated Nando Pijnaker's header.

Kubo drew a solid save from Woud, while the Oly Whites had some nice interplay around the Japanese box, without a climax. New Zealand were living dangerously, as some cheap concessions allowed swift counter attacks from the Samurai Blue, without the finish.

A Joey Champness cross fell to Just, metres from goal, after going through the legs of Wood, but the 21-year-old slipped as he lined up a shot. Just popped up again moments later, with a goal-bound shot deflected away by the Japanese captain.

The penalties were one sided. Woud didn't get near any of Japan's efforts – all expertly stroked into the corners – while Kosei Tani parried Cacace's attempt, then watched Lewis lift his shot over the bar.

Dreams die hard, but what a dream what it lasted.