The Black Ferns sevens team have survived an enormous extra-time scare in their Olympic semifinal against Fiji to claim a place in the final against France.

The New Zealanders had to dig to new depths to scramble to a 22-17 victory over the Fijian women, many of whom were in tears at the final whistle as they realised they wouldn't emulate the gold medal feat of their men's team.

The Black Ferns, silver medallists in Rio five years ago, had cruised through the tournament to this point but were always going to be tested by the physical Fijians, who dominated defending champions Australia in their quarter-final last night, and so it proved.

In the end, Gayle Broughton was the woman who broke the 17-17 deadlock deep into five minutes of extra time when she was in the right place to support captain Sarah Hirini's break after a quick penalty tap.

It ended a mammoth effort by both teams, with Fiji's calmness under pressure admirable. The Black Ferns were untidy on occasion but their defensive grit was outstanding at times, with Portia Woodman and Tyla Nathan-Wong in particular scrambling superbly.

The Black Ferns will meet France tonight at 9pm for the chance to win gold. Their Kiwi men's counterparts have already won silver in Tokyo.

Asked afterwards on Sky Sport how the Black Ferns dug so deep, Broughton said: "It's this jersey. We've been away from our loved ones for a while. We probably hesitated a bit too much. But mana, mana is the word that comes to mind.

"In the second half we were just waiting for them to attack and play like Fiji. We had an opportunity to show why we wear this jersey and what it represents and what it brings out in us. Extra time, to finish like that, what more could you ask for?"

Broughton scored her extra-time try near to where she scored the game's opener after what was an inaccurate start by the Black Ferns.

Fiji, who didn't appear overawed in the slightest by the occasion, came straight back via Vasiti Solikiviti, the conversion giving Fiji a 7-5 lead.

Time was running out for New Zealand, who were struggling to impose their pattern on the game, to retake the lead but Ruby Tui appeared set to do so with a breakout run from halfway only to lose the ball on the line under pressure from a Fijian defender.

The Black Ferns struck first after halftime via Portia Woodman, the speedster evading a defender on the right touchline to run in under the posts for a converted try which gave her team a 12-7 lead, but again it was short lived, Fiji scoring again through Solikiviti to tie the scores.

When Stacey Fluhler ran on to a perfectly weighted Kelly Brazier pass to score near the posts with 30 seconds remaining it had seemed the Black Ferns had done enough, however Tyla Nathan-Wong hit a post with her conversion attempt which meant her side were still vulnerable to a late try. 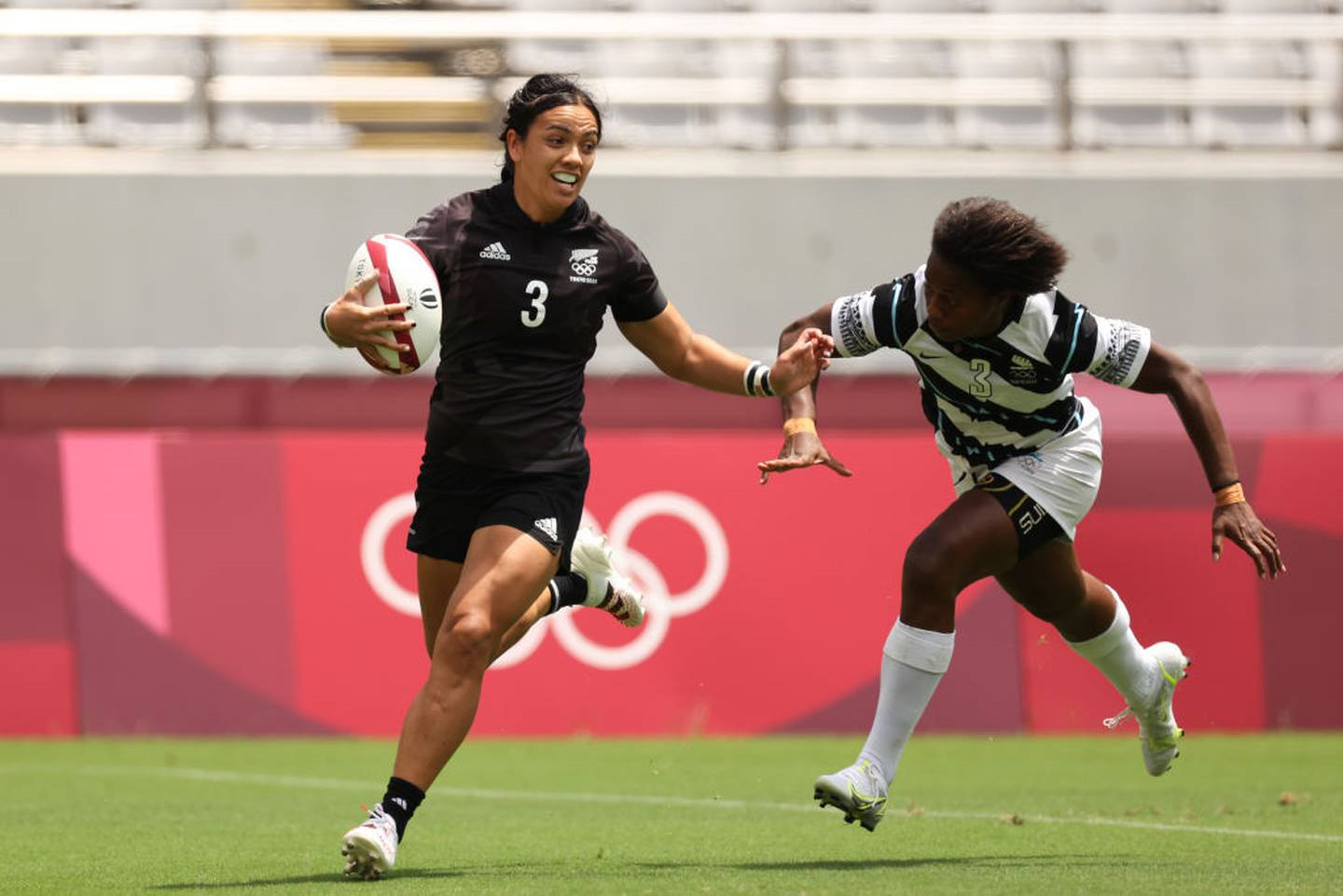 And so it transpired; Nathan-Wong kicking the restart out on the full and Fiji scoring in the right corner to force five minutes of extra-time and send an already tiring Black Ferns into dangerous territory; the first to score would move to the final.

Fortunately for the Black Ferns, Fluhler leaped high to steal the restart from Fiji, the Black Ferns piled on the attack and Hirini and Broughton combined to put their side into the final in the most dramatic of ways.

In the other semifinal, France upset Great Britain to win 26-19 after holding a 21-12 halftime lead.