By Niall Anderson in Melbourne

The exuberant Kiwi crowd at the MCG have been hailed by the players involved as one of the best in the history of New Zealand cricket.

Believed to be the largest amount of New Zealanders in attendance at a test cricket match – over 20,000 Kiwis were estimated to be in attendance on Boxing Day – the supporters who stuck around for all four days were certainly also the most vocal.

Compared to the usual crowds the Black Caps usually get in home tests – small and largely mute – the Kiwi fans who took up residence in Bay 21 at the MCG were a remarkable contrast.

Cheering throughout the Black Caps' eventual 247-run drubbing at the hands of Australia, the New Zealand fans pinched a few Barmy Army tunes, tweaking the words to make them local, and were regularly chanting and clapping.

The New Zealand national anthem got several renditions – of mixed quality - to applause from the Australians in attendance, while several classic Kiwi songs (Why did Jackie go away?) were belted out by a slew of enthusiastic males in various states of intoxication. 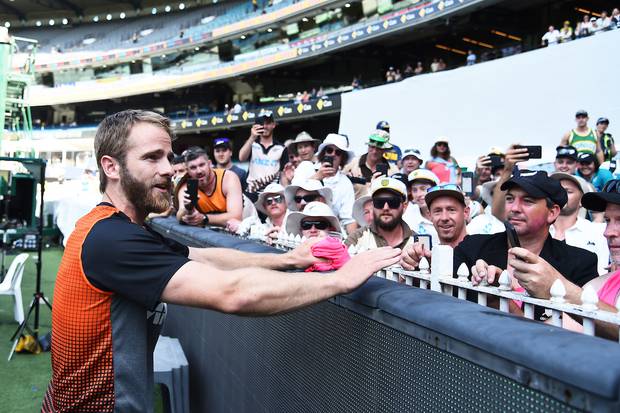 Kane Williamson thanks the Black Caps fans after their test defeat at the MCG. Photo / Photosport

Black Caps captain Kane Williamson, who went over to the crowd after the match to thank the fans, said their support was unforgettable.

"The crowd were truly incredible and an experience that I think all the guys will never forget. I guess the only things that would compare to it are some of the moments we had during World Cups where they were just so engaged, but this was even more unique as we were coming second for most parts of this match."

#SteadyTheShip with a big “Thanks Mate!” to all the Great New Zealanders who sung their hearts out all Test in support of the @BLACKCAPS! #BoxingDayTest #AUSvNZ pic.twitter.com/tSgj5ERtad

"They were pretty loud and it's fantastic to get that support away from home, full credit to them and it was pretty special hearing your name being chanted out.

"I think they really appreciated us coming over – the last few days have been so loud, it's been fantastic. It's the result we didn't want, but they kept on chanting, full appreciation to them."

"The New Zealand crowd were excellent, I thought they added to the Boxing Day test. It was a little bit like having the English here, to be honest. They made it exciting, they gave us a bit of stick, we gave a bit back, it was all in good fun and just makes it more memorable and more enjoyable to play in front of crowds that are getting right into it like that." And, for the Kiwi supporters who had waited since 1987 to get a chance to visit Melbourne for the Boxing Day test, Paine had a prediction.

"It was an excellent Boxing Day test match crowd - and I don't think it will be another 30 years until they're back."