The top men's tennis player in the world, Novak Djokovic, spent Orthodox Christmas in an immigration detention hotel in Australia on Friday as he sought to fend off deportation over the country's Covid-19 rules and compete in the Australian Open.

Djokovic received calls from his native Serbia, including from his parents and the president, who hoped to boost his spirits on the holiday.

On Instagram, he posted: "Thank you to the people around the world for your continuous support. I can feel it and it is greatly appreciated."

The 34-year-old athlete and vaccine skeptic was barred from entering the country late Wednesday when federal border authorities at the Melbourne airport rejected his medical exemption to Australia's strict COVID-19 vaccination requirements.

He has been confined to the detention hotel in Melbourne pending a court hearing on Monday, a week before the start of the tournament, where he is seeking to win his record-breaking 21st Grand Slam singles title.

During the day, Djokovic's supporters, waving banners, gathered outside the Park Hotel, used to house refugees and asylum-seekers. 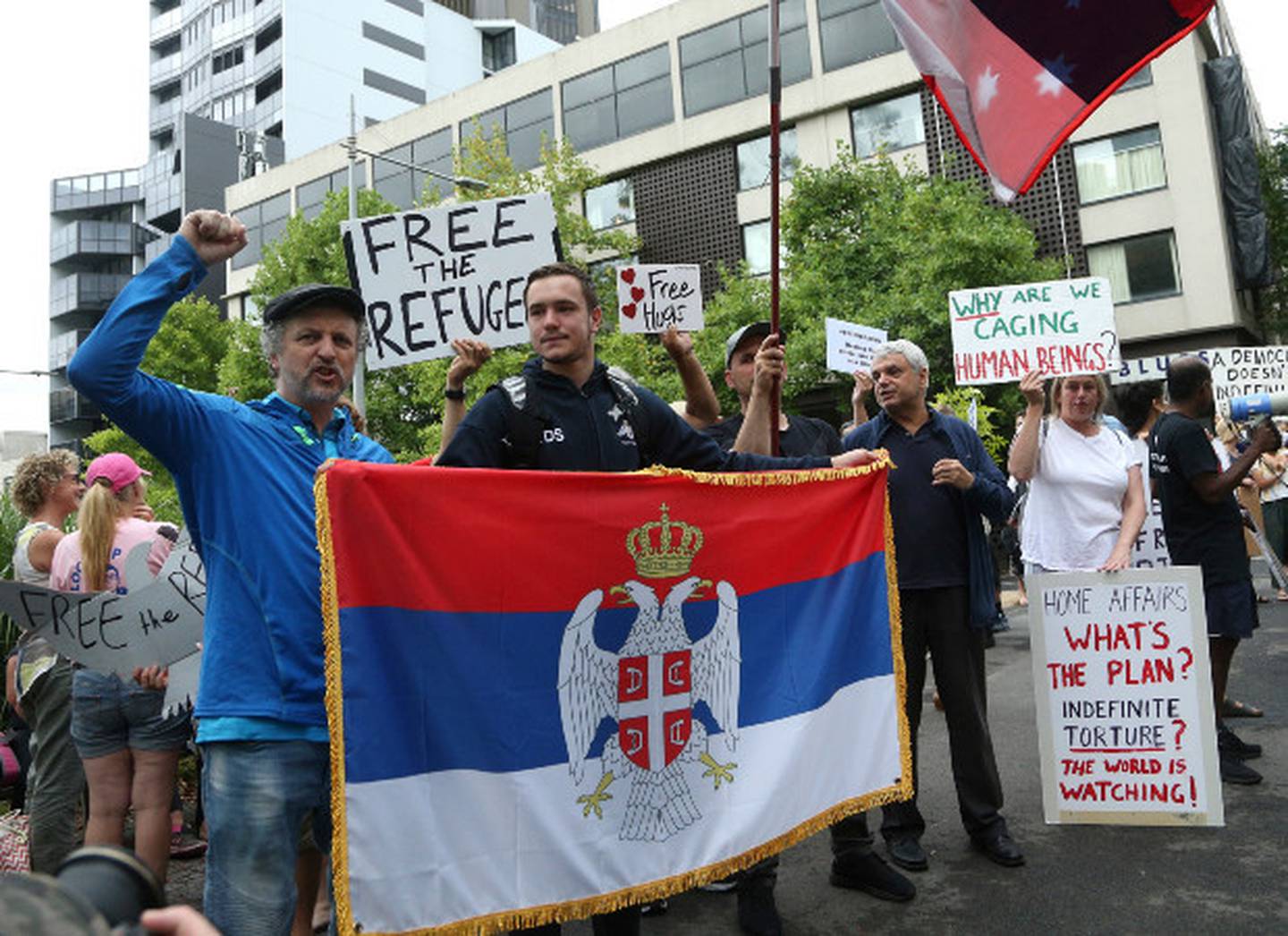 Protestors gather outside an immigration detention hotel where Novak Djokovic is believed to be staying in Melbourne. Photo / AP

A priest from the Holy Trinity Serbian Orthodox Church in Melbourne asked to visit the nine-time Australian Open champion to celebrate Orthodox Christmas but was turned down by immigration officials because the hotel is under lockdown.

"Our Christmas is rich in many customs, and it is so important that a priest visits him," the church's dean, Milorad Locard, told the Australian Broadcasting Corp. "The whole thing around this event is appalling. That he has to spend Christmas in detention ... it is unthinkable."

Australia's Covid-19 rules say incoming travellers must have had two shots of an approved vaccine, or must have an exemption with a genuine medical reason, such as an acute condition, to avoid quarantine. All players, staff, officials and fans need to be fully vaccinated against COVID-19 to enter the tournament venue.

Djokovic flew to Australia after obtaining a medical exemption backed by the country's tennis federation and approved by the Victoria state government. The grounds for the exemption have not been disclosed. But the Australian government pronounced it invalid when he arrived.

The dispute has become a touchy topic in a city where residents spent 256 days in 2020-21 under severe restrictions on their movement. Djokovic's exemption stirred allegations the star athlete got special treatment.

While some players have sympathised with his situation, others have said getting vaccinated would have prevented any drama.

But amid the latest turn in the dispute, even some who have been critical of Djokovic in the past are now seemingly in his corner.

"Look, I definitely believe in taking action, I got vaccinated because of others and for my mum's health, but how we are handling Novak's situation is bad, really bad," Nick Kyrgios, an Australian player and outspoken critic of some of Djokovic's opinions on vaccinations, posted on Twitter. "This is one of our great champions but at the end of the day, he is human. Do better."

Australian Open tournament director Craig Tiley said earlier this week that 26 people connected with the tournament applied for medical exemptions and only a "handful" were granted. Three of those have since been challenged.