Novak Djokovic's tears said it all.

The world No. 1's day of history turned into a nightmare at the US Open with Daniil Medvedev causing a massive boilover to win his first grand slam.

The tennis world was stunned at Djokovic's meltdown as he let the chance to complete a calendar grand slam – the first male player since 1969 – get ripped from his grasp.

The most surprising this is that he barely fought back.

The world No. 2 's 6-4 6-4 6-4 victory makes him Russia's first grand slam champion since Maria Sharapova and the first Russian man to win a slam since Marat Safin in 2005.

As much as Medvedev won it, Djokovic lost it. 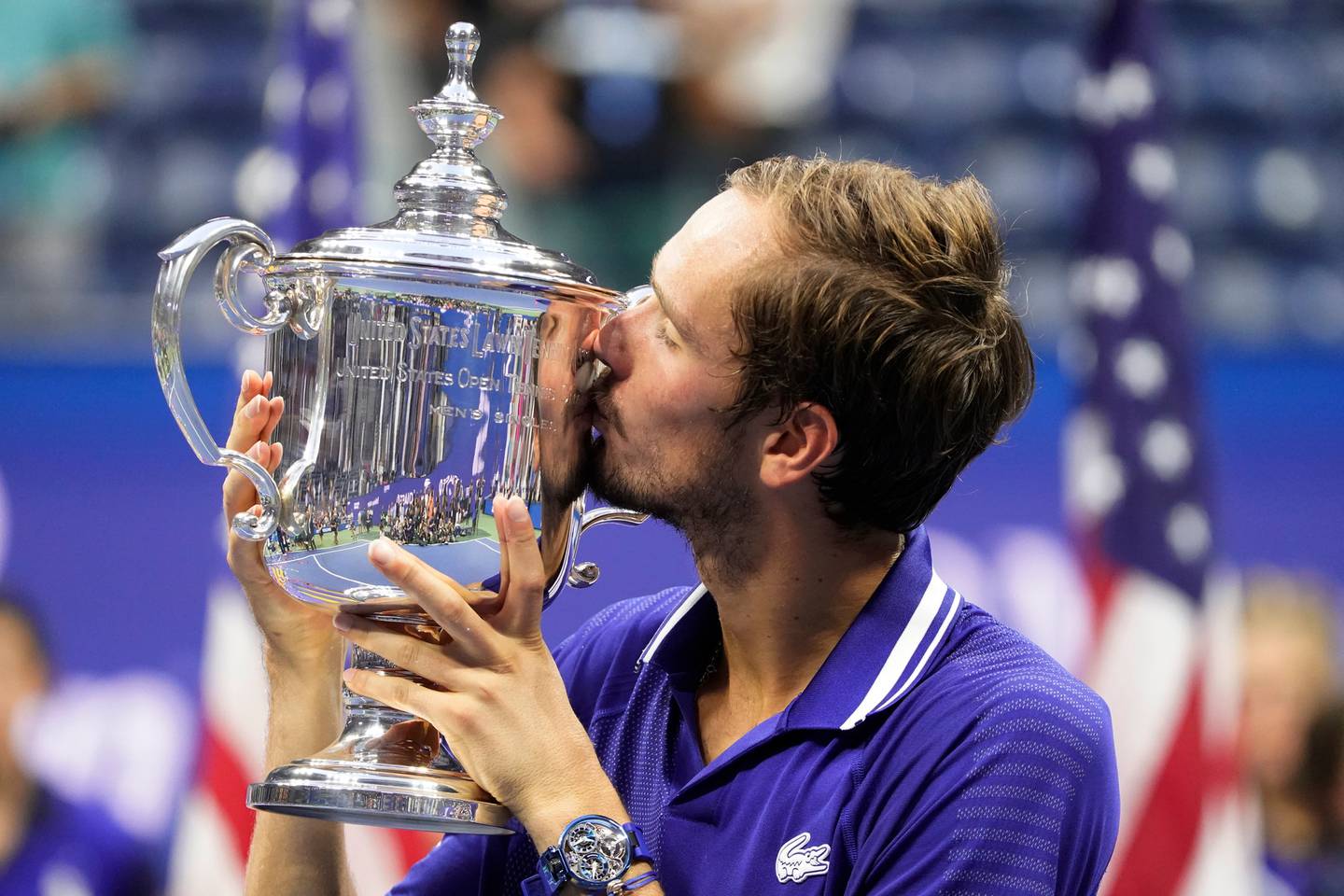 Daniil Medvedev, of Russia, kisses the championship trophy after defeating Novak Djokovic, of Serbia, in the men's singles final of the US Open. Photo / AP

After just two hours and 15 minutes, Djokovic's unravelling was complete as the weight of history bore down on his shoulders and ultimately broke him.

He was overcome with emotion towards the end of the match, breaking down in tears before the final service game and again when he stepped up to the microphone during the trophy presentations.

It was Djokovic as the world has never seen him. He said he had "never felt like this" as he wiped away tears before a thundering round of applause from a New York crowd that had been booing him just one hour previously.

The photos of his emotions spilling out were gripping.

Medvedev collapsed to the court rolled around with his tongue sticking out in a bizarre celebration after the final point – but there was more emotion in the minutes before the match ended with Djokovic spotted sobbing into his towel during the change of ends at 5-4 in the third set. 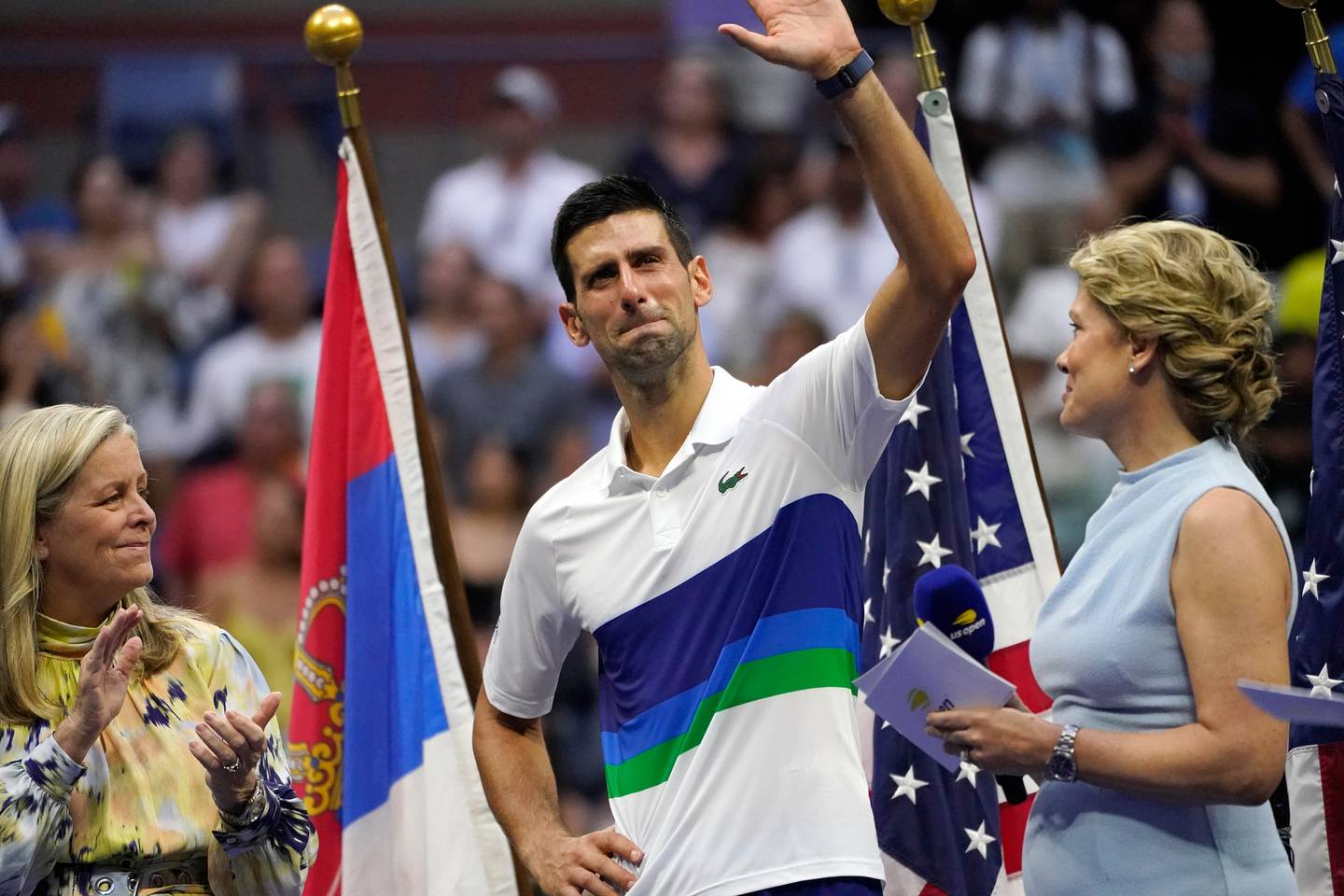 Novak Djokovic waves to the crowd after losing to Daniil Medvedev in the men's singles final of the US Open. Photo / AP

Djokovic buried his head under his towel and was seen with tears rolling down his cheek before he walked back onto court where Medvedev was serving for the match for a second time.

He played the first point of the next service game still wiping tears from his eyes.

The tears came again during the trophy presentation with both Djokovic and Medvedev offering classy praise for each other.

"You guys touched my soul," he said to the New York crowd.

It came after some late drama with Medvedev facing some nervous moments trying to close out the match.

In the end it was just a bump in the road on his way to victory.

Djokovic had been attempting to win the first calendar-year men's singles Grand Slam since Aussie Rod Laver 52 years ago and was also looking to make his case to be considered the greatest player in tennis history with a chance to go ahead of Roger Federer and Rafael Nadal with a 21st career grand slam.

Laver gave some consoling words for Djokovic in a tweet posted after the match.

Simply stunning Daniil Medvedev, you stopped one of the greatest tonight. To win your first Grand Slam title is always special, to do it against a champion like Novak Djokovic is something else. Take heart Novak, the quest continues. Best wishes, 🚀

Tennis commentators were earlier stunned by Djokovic's lack of mobility and some speculated the fatigue of playing more than 17 hours on court this tournament had finally caught up with him.

It certainly looked that way in the third set when he made a bizarre tactical shift to come to the net as often as possible in a clear sign he was looking to end points earlier than he normally would.

His body had finally failed him and it was the only opportunity Medvedev needed to win his first slam after two previous grand slam finals defeats.

The Serbian was running on empty after a second set meltdown where he smashed a racquet and was booed by the crowd.

Djokovic has routinely found a way to recover and re-set his mentality in similar situations of duress on the court — but he had nothing left in his bag of tricks on Monday morning.

More tears flowed from his eyes during the trophy presentations and they told the whole story.