Novak Djokovic is fighting his visa cancellation in court today as he seeks to keep his Australian Open campaign alive.

The world's top male tennis player thought he'd successfully received a vaccination exemption from Tennis Australia to enter the country but he was turned around by the Australian Border Force when he touched down in Melbourne last week.

Djokovic has since been holed up in a detention hotel as he waited for his lawyers to have the chance to argue his case to remain in Australia and chase his 10th title at Melbourne Park.

In an order released to the public on Sunday, Judge Anthony Kelly said the one-day case will go ahead as scheduled today, refusing a government request to adjourn until Wednesday.

Furthermore, Kelly has ordered that Australian Border Force must allow Djokovic out of immigration detention at the Park Hotel in Carlton so he can view the hearing at another location.

The order said the ABF must "bring the applicant to premises as specified by the applicant's solicitors on Monday, 10 January 2022 ... to permit him to remain there until the conclusion of each hearing and to secure his safe return to detention upon the conclusion of each hearing". The order does not state where Djokovic will be viewing the hearing from.

'What more could this man have done?'

Judge Anthony Kelly has questioned what more Djokovic could have done to ensure his entry to Australia after securing a medical exemption from Tennis Australia.

The court heard Djokovic had gained a medical exemption from the chief medical officer at TA to support his claim he had a medical contraindication to a Covid-19 vaccination.

Kelly told the court the Serbian was right to assume his medical exemption was valid.

"Here, a professor and a physician have produced and provided to [Djokovic] a medical exemption. Further to that, that medical exemption and the basis on which it was given, was given by a [panel] established by the Victorian Government," Kelly said.

"That document was in the hands of the delegate. The point I am somewhat agitated about is what more could this man have done?"

Djokovic's lawyers said his client believed that he "had ticked every box". Speaking with reporters today, Victorian Health Minister Martin Foley said the confusion around Djokovic's visa was an issue for the Federal Government.

"Once you're approved to get into the country, we had an independent, arm's length process that compared anonymously - without any identifying features - the expert medical considerations as to whether you are eligible to play in a tournament," Foley said.

"Not whether you are eligible to get [into the] country. We determine who enters a tournament in partnership with Tennis Australia, we don't determine who gets a visa. Only one level of government determines that visa, and it's not the Victorian government." Novak Djokovic's lawyer Nick Wood SC argued the Notice of Intention to Consider Cancellation of his client's visa is "defective" because it included a typo.

Lawyers for the Department of Home Affairs acknowledged in court filings on Sunday that a typo existed in the document but that it was insignificant.

But in court on Monday, Wood said it mattered. "It is more than a typo. The notice was defective," he said.

The court also hears Djokovic begged authorities to let him use his phone after it had been confiscated at Melbourne's Tullamarine airport.

"If you will let me talk to people although you've taken my phone from me I will try and get you what you want," he said, according to Judge Anthony Kelly.

Wood said his client did everything to provide authorities with documentation.

"Mr Djokovic was doing his level best to provide material to the officer at Tullamarine. Mr Djokovic did provide that evidence (in Dubai) before he boarded that aircraft," he said. Police outside the MIQ hotel in Melbourne, Australia where Djokovic is staying. Photo / AP

Tech dramas plagued the start of the hearing.

Members of the public were supposed to be able to watch and listen to proceedings via a secure link but that was not working at 10am AEDT.

It was suggested on social media the amount of people wanting to watch via the link may have caused disruptions.

An old audio/visual link that was sent out previously was reportedly working, but those on the call could allegedly be heard because they were not muted.

Australian journalist Sarah Dankert tweeted: "While there's a public broadcast, there's an old teams link that is still working for the Djokovic case and the court official is gone after having trouble with mute all. We've had techno blasting, giggling, shouting and someone is just saying Nole repeatedly in a pained voice."

The hearing was delayed before getting underway around 10.30am AEDT. The live stream continued to go down throughout the hearing. 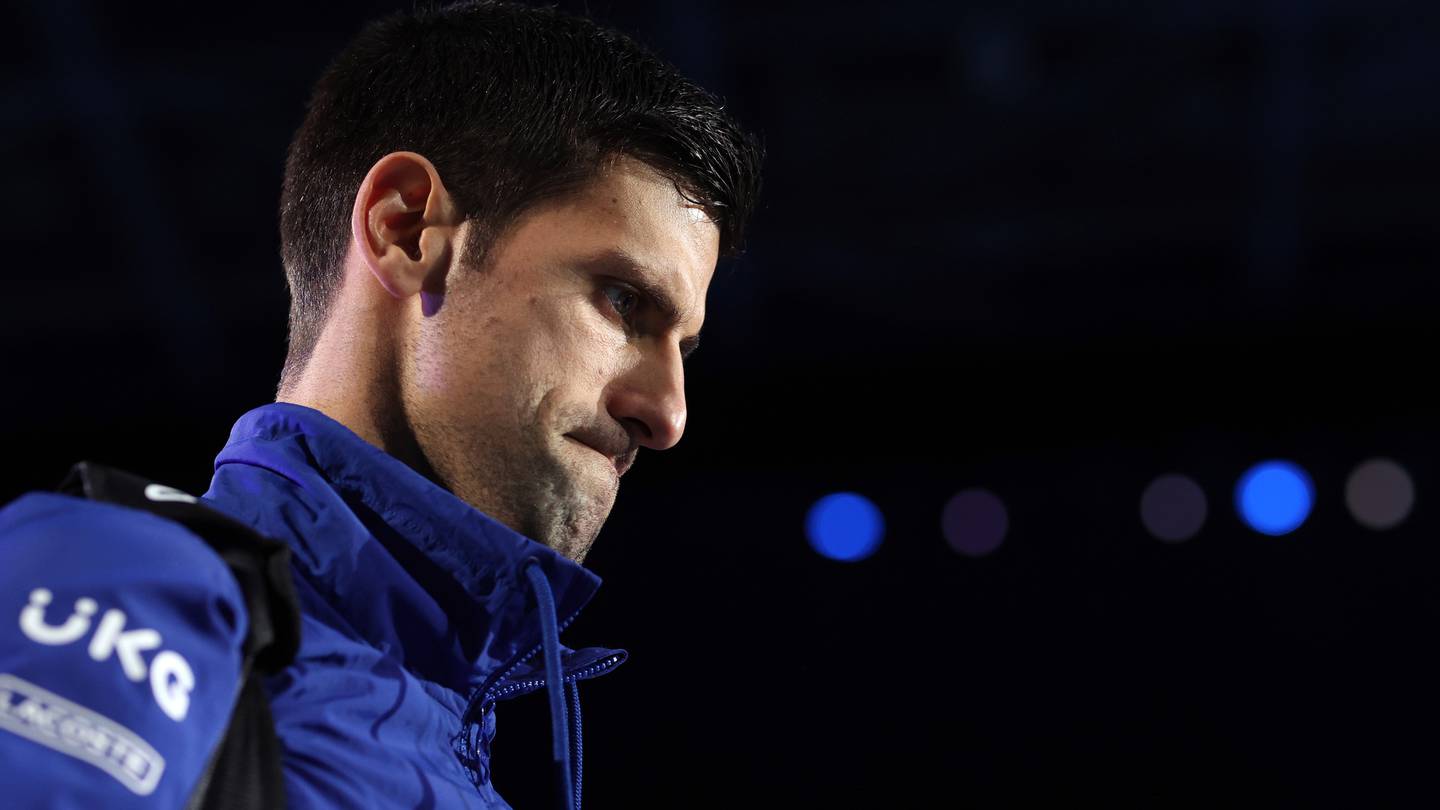 Novak Djokovic is arguing he has a valid reason for a medical exemption not to be vaccinated against Covid-19 because he has contracted the virus within the last six months. Photo / Getty Images

Djokovic is arguing he has a valid reason for a medical exemption not to be vaccinated against Covid-19 because he has contracted the virus within the last six months.

His lawyers submitted a 35-page document Saturday arguing his visa was wrongly cancelled and should be reinstated, allowing him to compete.

The team argued that Djokovic's claim of a positive PCR test on December 16 means he meets the criteria for a vaccine exemption under the guidance of Australia's immunisation advisory body.

But Australia's Home Affairs Department has rebuffed his arguments point-by-point and urged the judge to dismiss the case, with costs.

Djokovic is unvaccinated and poses a risk to people and the health system in Australia, the government said in a 13-page document lodged with the court on Sunday.

The government added "there is no such thing as an assurance of entry by a non-citizen into Australia".

Significantly, the government's submission also said it retains the right to keep Djokovic detained even if he wins Monday's case.

"If the Court makes an additional orders for immediate release of the applicant, notwithstanding the above, the respondent submits that the Court should make it expressly clear that that order does not purport to (nor could it) prevent the respondent or any officer of the Commonwealth from exercising any power to detain that might be available to him or her despite the quashing of the delegate's cancellation decision," the submission said.

"An order for immediate release does not prevent re-detention if there is power to detain." 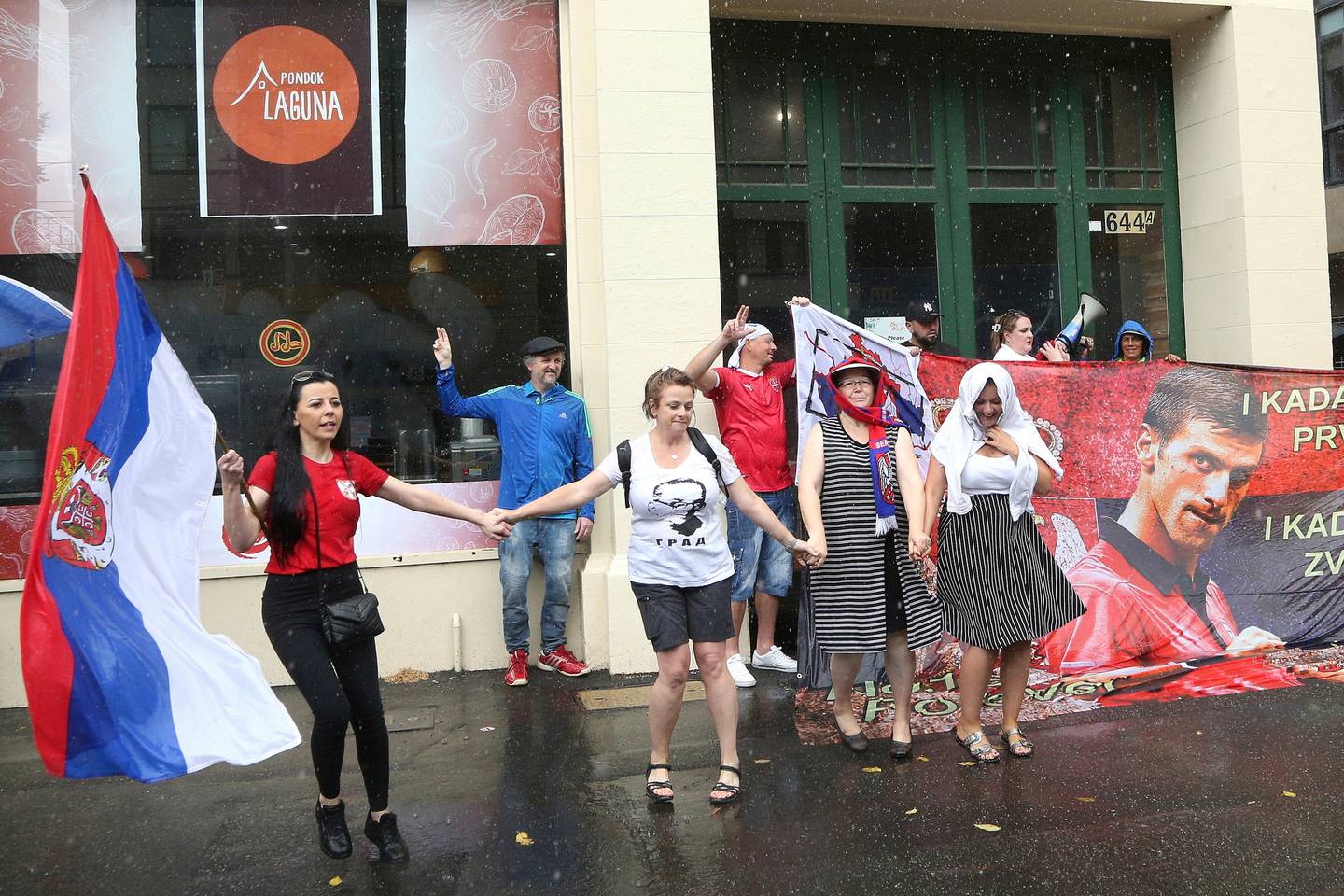 Protesters gather outside an immigration detention hotel where Novak Djokovic has been held in Melbourne, Australia. Photo / AP

Djokovic's family has already blasted Scott Morrison and Australian authorities for their treatment of the 20-time grand slam champion and they were at it again overnight.

At a rally in the Serbian capital of Belgrade, Djokovic's mother Dijana said her son was staying "in not humane conditions".

"They detained him and even don't give him breakfast, he has only lunch and dinner," she said, quoted by N1 regional television.

"He does not have a normal window, he stares at a wall."

Srdjan Djokovic, Novak's dad, took another crack at Morrison, adding: "We hope the court is independent and that it will bring the right decision and that Novak will get out as a winner and as a free man as the person he is.

"What is it that (he did) to deserve such treatment from their politicians, from their prime minister? Their fight between the federal and local governments and the tennis association — we are not interested in that at all."