Julian Savea is the latest player to voice his view of the rise in cards being shown during Super Rugby Pacific this season, saying some contact can be hard to avoid and is part of the game.

Over the last two rounds of the competition alone, there have been 15 yellow cards and three red shown, with four players handed multi-week suspensions.

While some of the offences have been rather difficult to defend, others have been a case of a play getting their positioning wrong, leading to accidental high contact.

Speaking on the latter, Savea said it was hard to avoid with the way ball runners carry the ball in the current environment.

"When the ball carrier is carrying a bit lower and you have a chop tackler that's taken the legs, then the second guy coming in can potentially catch the head which I think is part of rugby. It is what it is, I guess it's not my area.

"If we don't get it right, it's only going to hinder the team."

The Hurricanes will be without hooker Asafo Aumua for the next three weeks after being cited for a 77th-minute high shot on Highlanders loose forward Gareth Evans during their 22-21 win over the Southerners at the weekend. The incident went unpunished at the time, while the Highlanders had lock Josh Dickson sent off 19 minutes into the contest for high contact. Dickson also received a three-week ban. 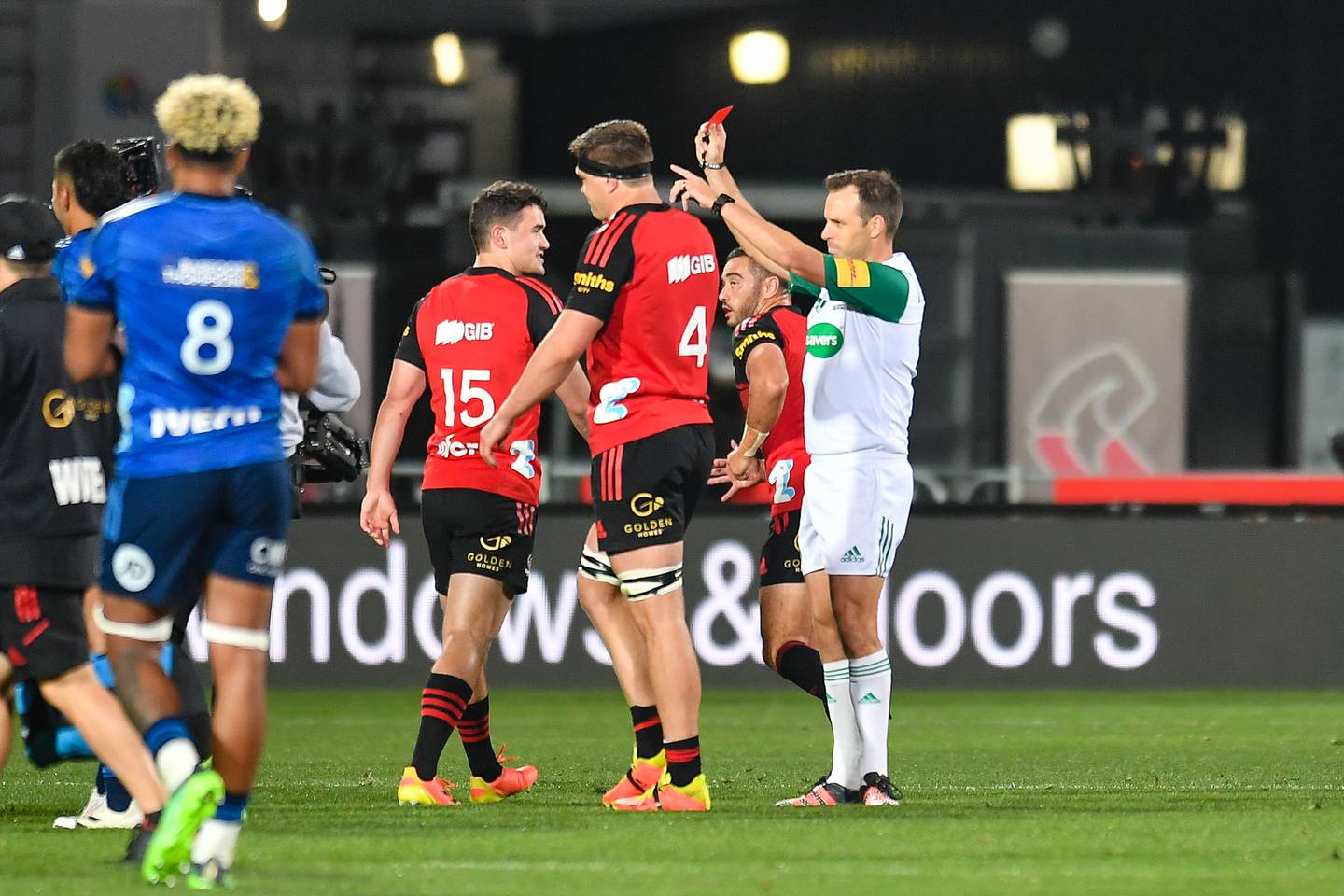 Scott Barrett of the Crusaders is red carded during his side's rough nine match against the Blues. Photo / Photosport

The ongoing spate of cards this season has been a talking point throughout the campaign, but has ramped up in recent weeks as there has been a player suspended in each of the past four rounds – including five after round seven (Caleb Clarke, Nepo Laulala, Tuaina Taulima, Shilo Klein, Nemani Nagusa).

However, Savea said the messaging around the game trying to protect players from head injuries was clear - in the 2019 Super Rugby competition there were no red cards shown at the same point of the season - and was hopeful officiating of the area and the suspensions handed down would be consistent.

"I feel like we are clear. When you see calls that don't make sense or some make sense with a similar thing, it is kind of hard but it is what it is and we can't control that. The only thing we can control is in the moment, try to be in a better position to not be in those situations," Savea said.