Returning home from an underwhelming two-week tour with their nine-match unbeaten record intact and luggage full of lessons, the Blues are taking no chances as the diet of Australian opposition continues at Eden Park.

Beauden Barrett will satisfy his second All Blacks rest requirement as the Blues welcome the Melbourne Rebels on Friday night, with Stephen Perofeta slotting into first five-eighth after a two-week absence with Covid.

Otherwise, though, the Blues are fully stacked and therefore demanding significant improvement on their sharp decline in form over the past two weeks.

Inspirational captain Dalton Papalii, No 8 Hoskins Sotutu and All Blacks centre Rieko Ioane return to the starting side after being rested for the tense 22-18 win against the Force in Perth, with Tom Robinson shifting to lock to accommodate Akira Ioane's retention in his favoured blindside role.

With All Blacks props Karl Tu'inukuafe and Nepo Laulala slated to come off the bench, the Blues pack boasts serious firepower that should prove far too much for the 3-7 Rebels.

In assessing the collective competitiveness of the Australian teams last weekend, assistant coach Dan Halangahu admitted the Blues were guilty of falling into the complacency trap compared to the level of mental application they brought to their leading Kiwi rivals.

"They got a rude shock last year when they'd been internal and hadn't had the experience of playing against the New Zealand teams," Halangahu said. "This year they've seen what's coming, and some of the teams here maybe we haven't shown the respect we should've.

"We don't make excuses, but we know it was a huge few weeks for us leading into that with the Chiefs and Crusaders away. There was always going to be a little dip in the energy we put into it because it took a lot to come through those games. We're happy we've done those games and done that leg, but now we want to put in a performance that the people of this region are proud of." 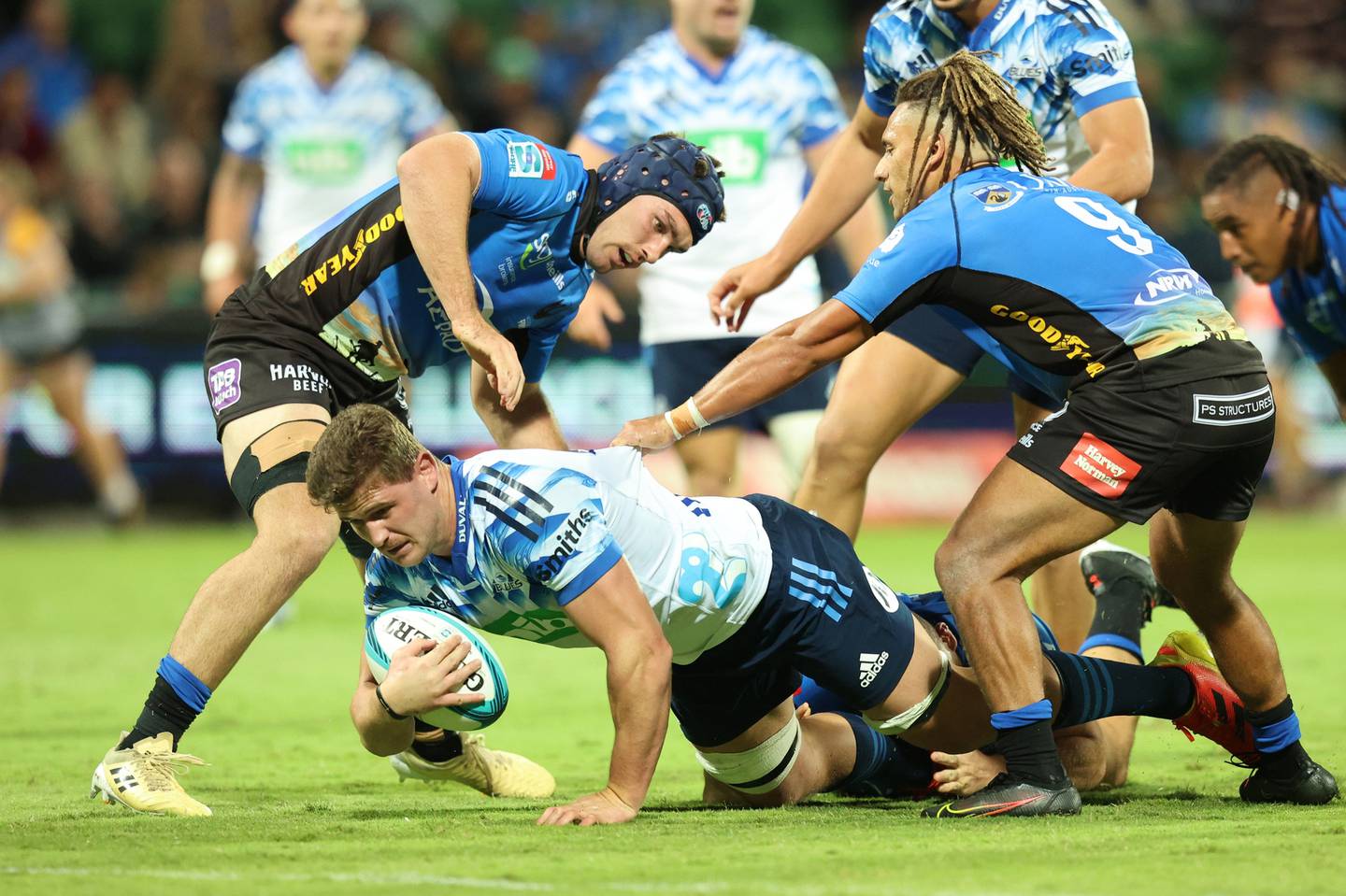 Captain Dalton Papalii returns to the starting lineup for the Blues. Photo / Photosport

With the Reds and Brumbies, the two leading Australian teams, to come before the three-week playoffs, the Blues will be seeking a bonus point victory against the Rebels to extend their lead at the top of the table.

"We're respecting what the Rebels have done. They're a team that's pushed sides over recent weeks and been unlucky in a number of games. They're one of the few teams who can boast about travelling across the ditch and having a win at Eden Park so that's in the back of our memories – that they've come here and had success and that hurts our team when we have recent history of someone having one over us, so we'll be going out there to correct that."

Halangahu praised Perofeta's compelling form this season as he prepares for another crack at first-five, having performed equally strongly from fullback earlier this year as he continues to mature.

"We're really looking forward to him being out there. We've all seen what he can do when attacking the line but he loves to be the guy who kicks the goals and takes more ownership. We see him almost grow his personality as he takes more responsibility for the team.

"Even when Beauden is here Stephen has stepped up and that's been a really big part of his growth. When Stephen is involved in the game and asserts himself that usually means good things for us. We all remember that kick from the sideline against the Chiefs that put us ahead at home. Stephen chose to take that kick, and that's something he didn't do two years ago."

The Rebels present former Warriors captain Roger Tuivasa-Sheck with another opportunity to build on his best effort of the season last week when his slick feet and offloading contributed to two first half tries against the Force.

"Roger is getting better with more time in the saddle. It's a big transition so we're trying to make it really simple around one or two decisions. When he has that clarity, we know he's a world-class athlete.

"We're also seeing him work hard on the defensive side of the game – that's where we saw his best game as well. We know it's not a complete game yet from Roger but he's got that magic touch on the edge that can unpick things other players can't. We're here for long-term success with Roger. It's not about him being the best player on the field at the moment."