Former All Blacks coach Steve Hansen has labelled Richie McCaw as "the best rugby player the world has ever seen".

Hansen, who coached McCaw briefly with Canterbury before linking back up with the legendary flanker with the All Blacks, made the statement in a wide-ranging interview with Wales Online, where he reflected on his tenure with the All Blacks.

That included coaching at four World Cups, with two as an assistant coach to Graham Henry, before taking over as head coach for the 2015 triumph and 2019 third-placed finish. 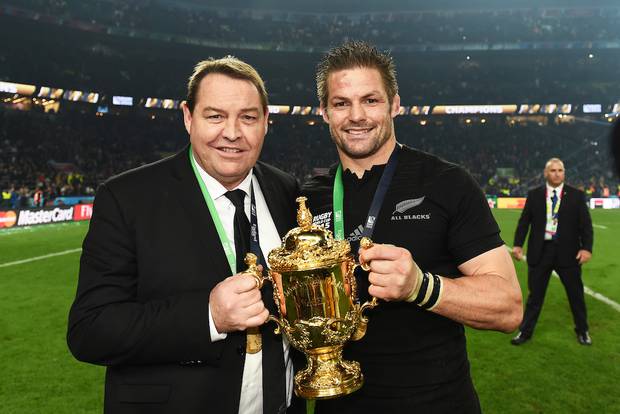 However, it was in 2011 where the All Blacks faced the most adversity, and where McCaw made his ultimate lasting impression, playing despite a broken foot through the knockout stages, as the All Blacks claimed their first World Cup since 1987.

Remarkably, even though he knew something was wrong, Hansen told Wales Online he wasn't aware of the extent of McCaw's suffering, because the coaching staff didn't want to know and McCaw didn't want to fess up.

"What he did in that tournament was phenomenal. Mentally, he would be the toughest bloke I have had anything to do with in my coaching career.

"I think he's the best rugby player the world has ever seen."

The 2011 World Cup triumph broke a 24-year drought without a Cup for the All Blacks, and McCaw's mental – and physical - toughness played a major role in the breakthrough.

"We won the next one by the skin of our teeth under some tough mental issues, with not having won one for 24 years," said Hansen.

Hansen also credits the New Zealand Rugby bosses for keeping faith in the coaching trio of Henry, Wayne Smith and himself after their disastrous quarter-final exit to France at the 2007 World Cup.

"We were the best team by far going into that tournament and we bombed it by not understanding what World Cups are about.

"I think that was a turning point in New Zealand's World Cup history.

"The New Zealand Rugby Union were strong enough, smart enough, whatever you want to call it, to say we were going to come back in and do it again.

"It was the first time in All Black history a group of coaches had been given the opportunity to take the lessons they had learned from World Cup poor performances and put them into the next one."