Sonny Bill Williams is back on the Warriors' radar after being released from his Super League obligations and allowed to chase new opportunities.

Toronto Wolfpack officials today gave Williams, and the club's other overseas players, their blessing to chase NRL deals before the transfer deadline on August 3rd, the Kiwi veteran's 35th birthday.

The Wolfpack were forced to withdraw from the Super League this year because of the ''overwhelming financial challenges'' posed by COVID-19.

The club will return in 2021 and will continue to pay their players 55 per cent of their salaries until the end of the season.

Toronto chief executive Bob Hunter told the Sydney Morning Herald Williams would be in high demand from their firesale.

"I know Sonny is healthy and in good shape and he'll have a lot of appeal,'' Hunter said.

"Sonny is actually planning to take some time and rest in Europe, possibly Spain, before heading back. We're booking the flights now for all those guys and their families.

"But we've told all the players today, 'guys, if you can get on to another club, then go for it'.

"It won't affect their pay with us because it's already been reduced to 55 per cent. But we're encouraging them to do that."

Several NRL clubs have expressed interest in signing Williams for the remainder of the season and the Warriors are expected to be amongst the chasing pack.

With confirmation last week that Agnatius Paasi, David Fusitu'a, Ken Maumalo and King Vuniyayawa will be returning to New Zealand, the Warriors have started preparing for what's next.

Warrior star Kodi Nikorima created a stir on Instagram by posting a picture of Williams in a Warriors shirt with the caption: 'home is calling brother'. 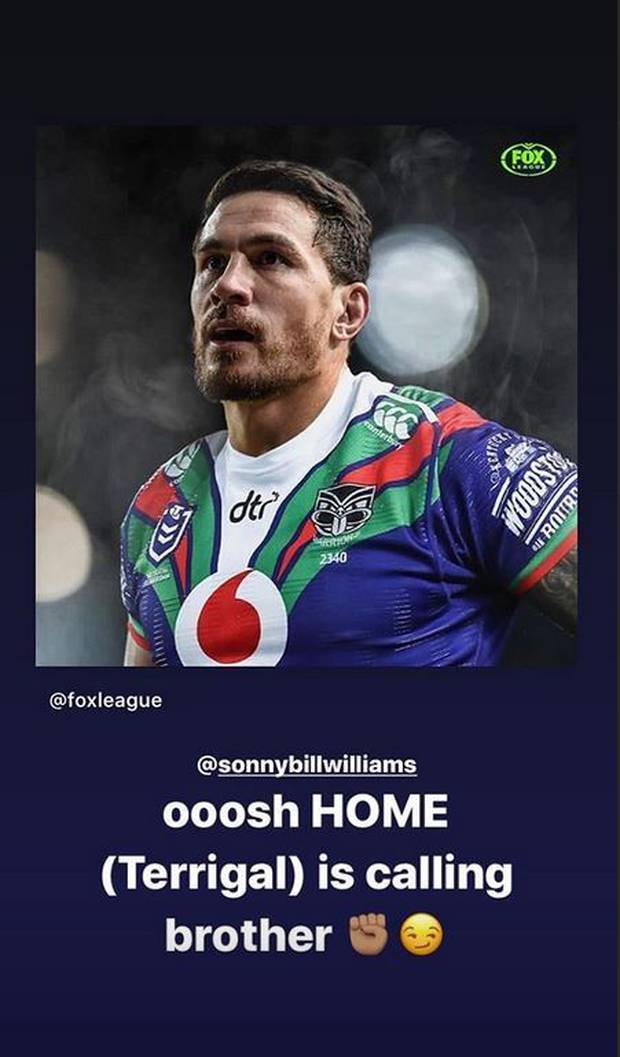 Coach Todd Payten said the Warriors had identified four of five potential players to bring in on loan, and were in the process of contacting other NRL clubs to check if any players might be available to them.

With just 10 rounds remaining in the NRL, Williams would only be available for as few as six matches by the time a deal is negotiated, flights organised and he spends two weeks in mandatory COVID-19 quarantine upon arrival in Australia.

The Sydney Morning Herald reported the Sydney Roosters were aware of the latest Williams whispers as early as last month, and privately conceded if he could not play in the Super League he was likely to return home to New Zealand.

The Wolfpack were taking part in the Super League for the first time this season and lost all six of their games, but were ravaged by injury.

International sports betting agency Sportsbook have been quick to address the action, laying the following odds on Williams' predicted future: