Wales captain Alun Wyn Jones found no humour in having his genitals fondled by England prop Joe Marler during the Six Nations match at Twickenham this morning (NZT).

Jones, a widely respected veteran, called on rugby's governing powers to review the bizarre incident six minutes into England's 33-30 victory at Twickenham after a scuffle had broken out. 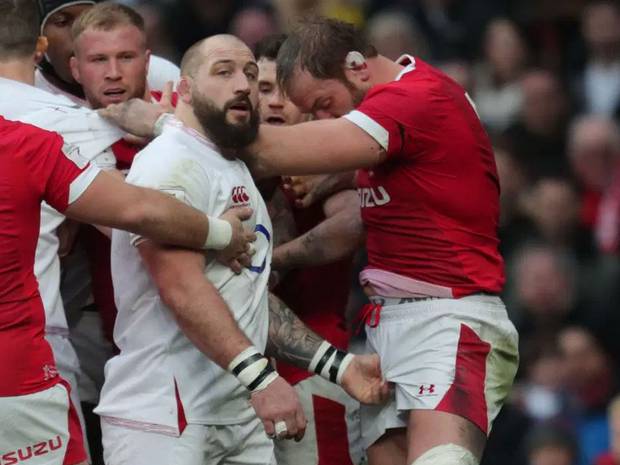 Under World Rugby regulations, Marler may now face a ban of anywhere between 12 to 208 weeks.

World Rugby regulation 9.27, which covers any incident against the spirit of good sportsmanship, states that "grabbing, twisting, or squeezing the genitals and/or breasts in the case of females" can be punished by a 12-week ban at the lower end.

The mid-range punishment is 18 weeks; top end 24+ weeks and the maximum possible sanction is set at 208 weeks.

"Yeah, it was interesting," Jones said. "I've played 138 tests for my country and if I react I get a red card. It's tough, isn't it? Hopefully World Rugby takes a look at it. Joe's a good bloke. Lots of things happen on a rugby field.

"It's difficult as a captain these days it feels like as a captain you can't speak to a referee about anything. I had a look at the touch judge and he obviously didn't see what happened which is fine.

"There's a lot of footage that has been shown. It seems there's a lot of supporters that saw what happened. It's very frustrating. We talk a lot about TMOs and reviewing footage and there doesn't seem to be a lot of it happening."

Marler often plays the class clown off the field but he appears to have overstepped the mark on this occasion.

"It's very easy to make sport a vehicle for political and social issues," Jones said. "There's a gravitas for a lot of people to do that in this day and age. That's a dangerous thing, and also something that's real and important.

"It needs to be taken into context of the game but with regards to the judicial power that World Rugby has surrounding each game and as players – I'm going to remove Joe and myself from this – that's what we need to focus on, not the incident or the individual."

It was a moment that evoked the infamous Vinny Jones ball grab on Paul Gascoigne during a Premier League match in the mid-1990s.

ITV talked about the incident at half-time and Welsh pundit Gareth Thomas - who announced he was gay in 2009 - had his say on Marler's antics.

Thomas - a former Wales captain - said: "It would've never have happened in my day and I'm really upset about that - because if it had I would have never retired!"

The joke from the openly gay former dual-code rugby player went down very well with supporters on Twitter.

One said: "Gareth Thomas saying he's upset at the Joe Marler behaviour because if he'd known he would do that "he'd never have retired" I AM CRYING."

Another tweeted: "Gareth Thomas just did the best bit of punditry in sport's history."

Wales must beat England to stand any chance of retaining the Six Nations crown they won in 2019 under former coach Warren Gatland.

They have lost on their last four visits to Twickenham, with their previous success coming in a 28-25 victory in 2015.