Silver Ferns stars have given their male counterparts a helping hand ahead of the upcoming Cadbury Netball Series.

Four players of the New Zealand Men's team, set to play the Ferns later this month, are self-isolating at a Christchurch hotel after making the trip across the ditch from Australia.

With no training exception and hotel staff keeping the gym off-limits, the group have been using pot plants, picnic tables and benches as makeshift equipment to stay fit.

Silver Ferns captain Ameliaranne Ekenasio has since asked fans on her Instagram story to get in touch if they had any equipment they could lend the players.

Meanwhile, Christchurch-based Ferns defender Jane Watson has dropped off some dumbbells and kettle bells to the group. She also offered a barbell but hotel staff said there wasn't any space to store it with players not allowed to keep equipment in their rooms. 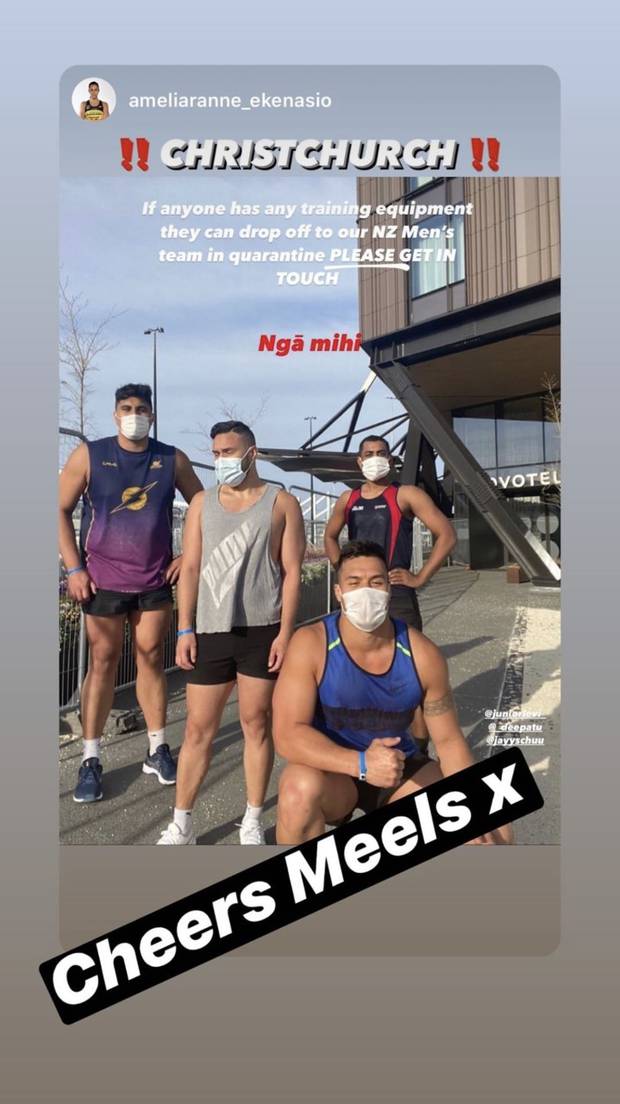 The Silver Ferns captain called out to fans on social media. (Photo / Instagram)

Men's shooter Junior Levi said the help has been great but access to the gym was still at the top of their wishlist.

"The hotel has closed it's gym to everyone but it would be awesome if they could let us four into it and clean it afterwards," he said. "That would be better as it saves us having to need equipment in the outdoor area which can be problematic for everyone.

"At the moment they're saying no to us keeping equipment in our room too to keep track of what we're touching for tracing purposes."

The men's team will assemble the week of the series later this month, while the Silver Ferns enter camp next week.

Speaking on Gold AM's Country Sport Breakfast this morning, Ekenasio said they were relishing the opportunity of playing the men again.

"It's huge, to be honest, everything has to change a little bit, we do really back our game plan when we face them but we have to be a whole lot smarter," she said. "They're big, they can jump, they can do everything unbelievably well so we've really got to make sure we keep what ball we can.

"They took it out last year and they're such a good matchup for us, especially going into playing England ... we have to up pretty much every single area of our game."

The Cadbury Netball Series starts on October 21, with the Silver Ferns playing the New Zealand Men on October 22.