World Cup football captain Ryan Nelsen has claimed chaos underpinned the All Whites' campaign at the 2010 tournament in South Africa.

And Nelsen, a former English Premier League star with Blackburn Rovers, Tottenham Hotspur and Queens Park Rangers, has admitted his frustration boiled over to the point he threatened to punch a Kiwi administrator on the nose.

Nelsen told the Between Two Beers podcast that while New Zealand Football's intentions may have been good, the organisation was woefully out of its depth in providing the All Whites with the support they needed for the World Cup campaign.

In the wide-ranging podcast, the 43-year-old Nelsen lifted the lid on the All Whites' World Cup and claimed he had to battle NZF for the most basic of items including adequate food.

The lowly rated All Whites shocked the sports world by drawing with all three of their group opponents, including the defending world champions Italy. But some of the biggest hurdles were provided by their own national body, according to Nelsen.

"The stories were farcical," he said.

"My thing was ... I probably had one World Cup, we had a really good team, so New Zealand Football get your s**t together, make sure it is freakin' organised. "Then on day one we come into camp and it was shambles ...

"... [maybe] not a shambles and done to the best ability of what they thought was good preparation, but nowhere near the level required.

"I had massive issues with New Zealand Football. They were lovely people but they hadn't been at the elite level where they know what it takes to win and prepare."

Having just played Australia in Melbourne, the team arrived in Europe and found the plane from Frankfurt to Austria — where they were playing a warm-up game against Serbia — was too small for all of their gear. At one point, the players were forced to turn baggage handlers, forming a chain to shift their 200 bags, Nelsen claims.

"We were in a line with English fans who were going to Ibiza or some party, with them taking photos of us, laughing at us. It was comical," Nelsen said.

The players took their boots, shin pads and toiletries on board while most of their bags had to be trucked to the match venue, arriving late.

It proved a great day for New Zealand football, which Nelsen alleged only led to more frustrations for him and the team.

"We won 1-0 ... NZ Football said why are you complaining, you won, what's the problem?" Nelsen told the podcast from his home in Washington DC.

"It's very hard to explain to the people who haven't been at that level. It's not their fault, they haven't been accustomed to it.

"I called one New Zealand person in control of finances — I won't mention a name — and said 'I am going to punch you on the nose when I see you in South Africa if you don't sort this out. And if any of the reporters say anything, I'm going to tell them why'."

The initial food at their South African base was "pretty rubbish, crap, cooked spaghetti, burnt chicken", according to Nelsen.

He says he asked for a food funding boost, reminding an official "we're playing a World Cup game in nine days' time".

Nelsen said his relationship with All Whites coach Ricki Herbert was "really good" but they came from very different positions.

"He stayed in his lane, Ricki was great, he did his thing," Nelsen said. 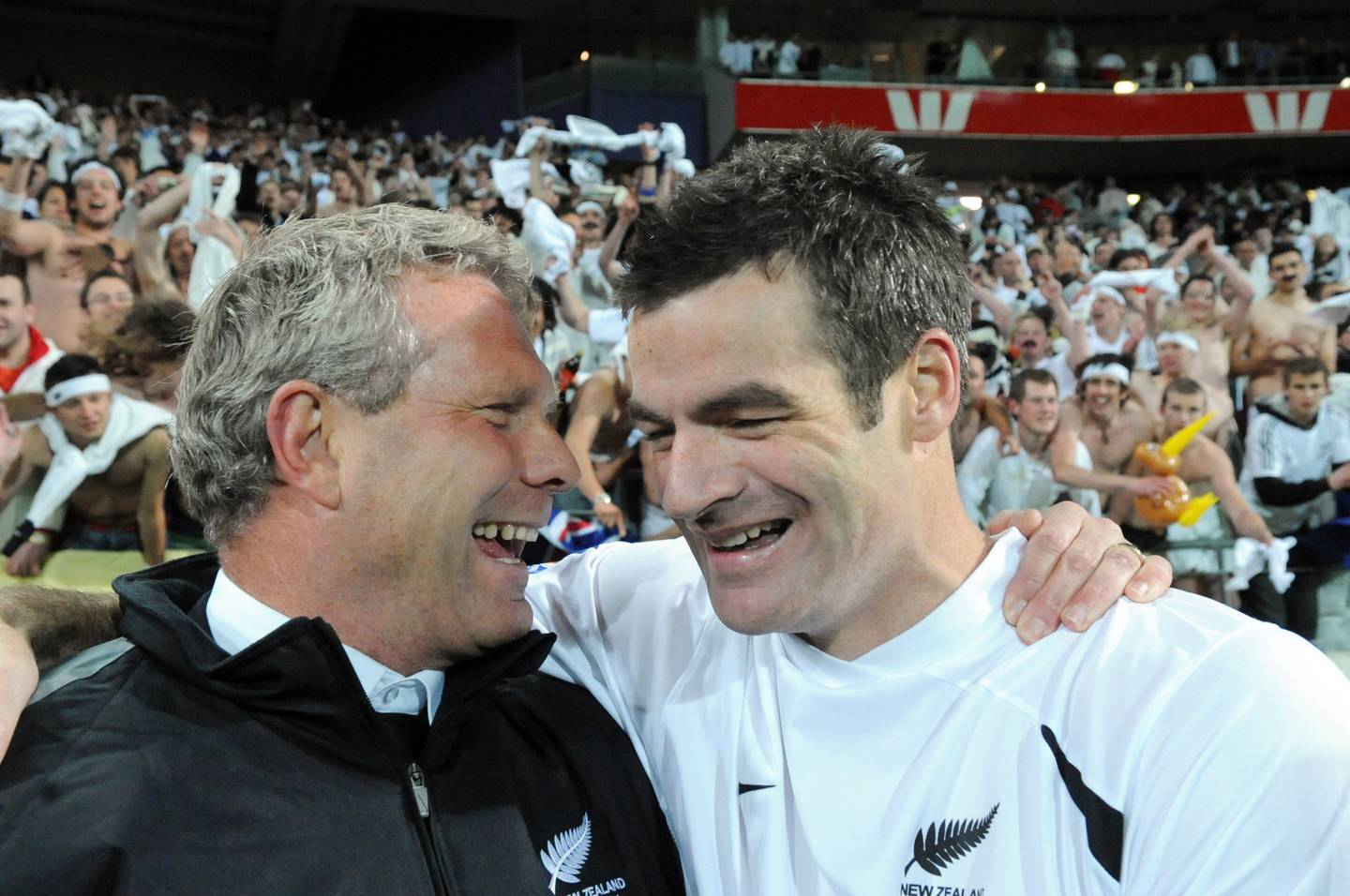 ""I didn't care. I didn't need NZF. I could say what I felt was needed to win the game.

"I looked like the arsehole because everything was not up to standard.

"I made sure everybody told me when they needed something, and got it done. I knew New Zealand Football were a wee bit scared of me."

Incredibly, Nelsen said he went into the finals believing it would be a failure if they didn't lift the trophy.

"Looking back at that now, it's laughable.

"At the time I was devastated not meeting my expectations of getting out of the group. It really did feel like we were doing something for the country, something special."

Asked about the mental drain, Nelsen told Between Two Beers: "Oh my God — for 10 days [post-tournament] I was a zombie back home in America.

"My daughter was born, one of the greatest moments of my life, but I couldn't kick out of it.

"I put far too much pressure on myself, to get everything perfect. When we got on the field it was like 'phew, let's play'. When I got off it something else would turn up."

Nelsen retired from playing in 2013, before taking up coaching.

Delighted by the stories he has heard since the tournament, Nelsen said it was a "billion per cent worth going through it all".

"I couldn't really say I enjoyed the experience. Looking back now, we did well. It was awesome."

Glading: Too harsh to say we were out of our depth

Michael Glading, the New Zealand Football chief executive at the time, believes the idea the organisation were out of their depth at the 2010 World Cup is harsh. However, he added it was a new experience.

"Don't forget the organisation two years earlier [2008] had been broke, and we were going into a whole new world. Definitely, it was challenging, but chaos for me is far too harsh a description."

Glading said they didn't have the finances or staff to cope with the demands of a major tournament, which largely came down to a money-saving mentality from New Zealand Football. He said, in hindsight, that wasn't a smart use of their money.

"The organisation post-World Cup was in a position where it had money in the bank and some of those things would not have happened again."

Glading said there was separation between the playing group and the administrative side of New Zealand Football following a request from the All Whites' team management.

"I felt that was a bit of a shame. If you put people in a room together and they socialise a bit more you've got more chance of sorting out some of those issues."

Looking back, he wished he had gone about things differently.

"Post the World Cup, 12 months later, I did sit down and have a really good chat with Ryan — one to one — and we made a lot of peace over a lot of issues. I was quite pleased that he took the time out."