Watford's Joao Pedro snatched a victory from Newcastle's grasp by scoring in the 88th minute to deny All Whites striker Chris Wood a winning debut for the Magpies.

The Portuguese forward's header stunned the locals among a crowd of 52,223 at St James' Park and kept Watford a place above the relegation zone.

Newcastle, which had new signing Wood in the team for the first time after his transfer from Burnley this week, looked to have won it through Allan Saint-Maximin's superb 49th-minute strike but retreated in the second half.

Newcastle stayed in next-to-last place and above only Burnley, who dropped to the bottom because of Norwich's 2-1 win over over Everton.

Newcastle started with real tempo and were denied by the crossbar after Joelinton flicked Ryan Fraser's deflected 11th-minute cross toward goal.

The hosts were spared four minutes later, though, when, after Saint-Maximin squandered possession on halfway, Josh King fired into the side-netting from Pedro's through-ball.

Joelinton volleyed wide at the far post after Fraser and Longstaff worked a short corner, and Wood sent a looping header over from another cross by Fraser, with the home side exerting the more consistent pressure.

The New Zealand international was unable to hit the target once again after Jamaal Lascelles headed Kieran Trippier's 24th-minute corner toward goal and Fabian Schar failed to work recalled goalkeeper Ben Foster when he got his head to Trippier's inviting free kick seven minutes later.

Longstaff lifted a left-foot shot high over the bar after Saint-Maximin, who until that point endured a frustrating afternoon, made progress down the left and pulled the ball back. 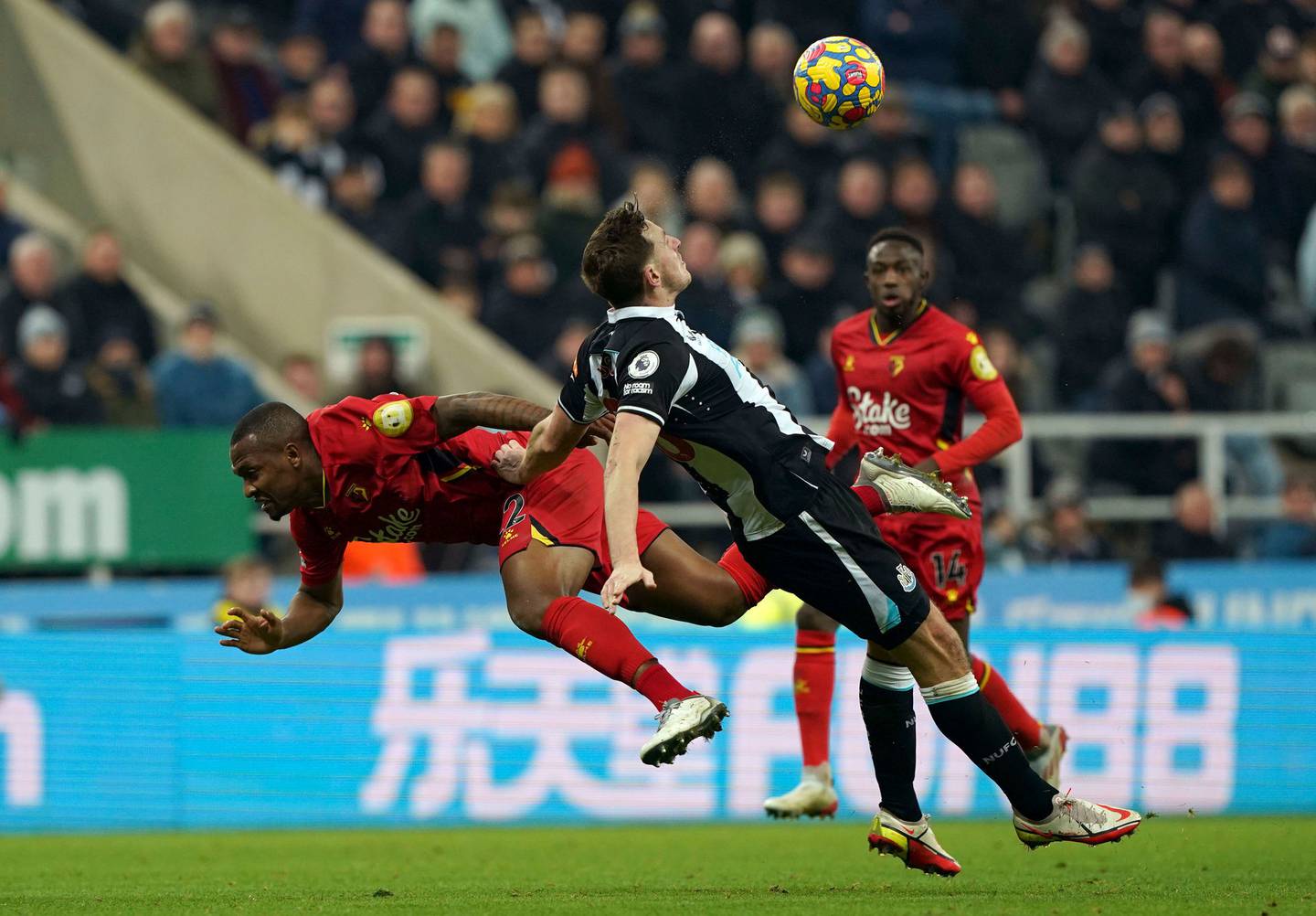 The first goal came in the 49th and, perhaps fittingly for a game that became increasingly scrappy, it arrived courtesy of an error.

Full back Jeremy Ngakia was robbed by Saint-Maximin as he chased down Shelvey's hopeful ball forward, but what followed was of much higher quality as the Frenchman cut inside before blasting a vicious shot past Foster.

Watford responded and Martin Dubravka had to claw Pedro's shot from underneath his crossbar before denying King as he raced through on goal seconds later.

And, with the Hornets adopting a more adventurous approach in the search for an equaliser, the game started to open up.

Former Newcastle player Moussa Sissoko should have levelled from Dennis' 67th-minute pass but stabbed his shot wastefully wide, and it was left to Pedro to snatch a point three minutes from time with a fine header from substitute Kiko Femenia's cross.

For Pep Guardiola, the biggest challenge now will be convincing his Manchester City players the English Premier League title race is not over.

"My job is to take it out from the brain and heads of my players," Guardiola said after City beat nearest rival Chelsea 1-0 on Saturday. "To try not to believe what other people are going to say."

With City holding a 13-point lead, it's hardly surprising that people have already basically handed Guardiola's relentless team a sixth title in 11 seasons.

After all, the defending champions are on a 12-match winning run in the league after Kevin De Bruyne's brilliant curling strike in the 70th minute sealed victory at Etihad Stadium. City has lost two games all season – it would have to lose at least three of its remaining 16 matches to drop out of first place – and already has played all of the top teams away from home.

Liverpool, in third place 14 points behind having played two games fewer, looks to be the only team realistically capable of stopping City. Even that is improbable, given City's form and pedigree.

Chelsea were well beaten even if Thomas Tuchel's team didn't give up many chances against City, who dominated possession and kept the visitors penned in their own half for much of the match.

"We won't give up," Tuchel said, "but if City keep on winning every game, nobody can catch them."

Liverpool will look to trim the gap to City by beating Brentford at home on Sunday.

At the other end of the standings, Norwich climbed out of last place with a 2-1 win over Everton, whose supporters' frustrations with manager Rafa Benitez appear to be boiling over. One fan ran onto the field in the first half at Carrow Road and was making his way toward Benitez before he got stopped by stewards.

Wolverhampton defeated Southampton 3-1 in other match and jumped to eighth, with Adama Traore completing the win with his first goal of the season.