The Warriors won't be flying to Australia this weekend — and it's now feasible that they won't cross the Tasman until much later this month.

The idea of the team leaving for Sydney this Sunday always seemed like a 'pie in the sky' scenario, especially given that New Zealand will remain in stage four lockdown until at least next Wednesday.

That would have made it impossible for the club's operations and coaching staff to convene at Mt Smart (which is still closed) and gather all the necessary gear and equipment, let alone the meetings required to coordinate the players before a period away from home that could stretch on for months.

But the club needed to flag that possibility of a imminent departure, given that's what would have been required to meet the milestone dates under the NRL's proposal to restart the competition on May 28, with pre-season set to begin on May 4.

The Herald understands the NRL have floated a new work-around for the Warriors.

It would see them training while serving their 14-day isolation period in Australia, rather than being confined to hotel rooms.

The club would need to be in a self-contained facility, similar to the Wellington Phoenix's camp last month in North Sydney, before the A-League season was suspended.

If that proposal comes to fruition, that would take the pressure off the Auckland club to get across to Australia, while also leaving the May 28 restart as a possibility.

But it would be contingent on special dispensation from the Australian border authorities, firstly to enter the country and secondly to be able to train in isolation. 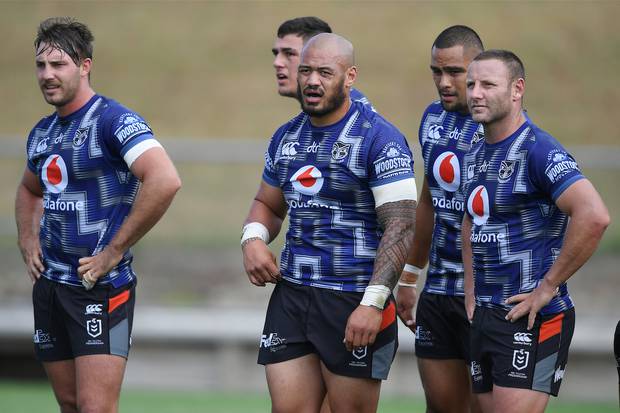 The Warriors have had a frustrating month. Photo / Photosport

The last week hasn't reflected well on the NRL.

As well as seemingly ignoring the needs and wants of the broadcasters, it feels like the May 28 date — which was way ahead of the previous July or August scenarios — was floated without deep thought given to the Warriors' unique situation, and the challenges they face in relocation.

Those points have since been emphatically made, in an extended meeting on Thursday night between the Warriors and the NRL.

The club was represented by chairman Rob Croot, CEO Cameron George and coach Stephen Kearney, while there was a roomful from the NRL, including CEO Todd Greenberg and Chairman Peter V'landys.

There were some particularly frank discussions, and all of the Warriors' concerns were put on the table.

There is still a multitude of questions to be answered, particularly around how the players will be able to see their families, and whether their wives, partners and children will be accommodated, should they travel to Australia.

But the NRL have committed to finding answers, with the next update due on Monday.

The Herald understands that the Warriors players and staff were informed on Thursday night that they wouldn't be travelling this weekend, which came as a weight off the shoulders, as some of the younger members of the squad had been mentally and physically preparing to go.

It's also believed that the team has been told that their most likely departure date will be much later in April.

That will give the Auckland club some breathing space and time to prepare and work through all of the logistics involved, which are considerable, and also allow the NRL to gain all of the special dispensation and permission necessary from the State and Federal governments in Australia.

The NRL are still pushing ahead with their best-case May 28 scenario, and a plan of allowing clubs to start pre-season training on May 4, but both of those dates could slip into June, or beyond, particularly given interstate border restrictions remain in Australia, as well as the trans-Tasman ones.