The NRL are prepared to continue playing the season without the Warriors.

The Auckland-based side have remained in Australia following Saturday's opening game in Newcastle after travel restrictions for both New Zealand and Australia would have left all members of the squad and playing staff in self-isolation for 14 days each time the crossed the Tasman.

The side will be based on the Gold Coast this week ahead of Saturday's game against the Canberra Raiders which was initially meant to take place at Auckland's Eden Park but has been moved to the Titans' home ground.

New Zealand Warriors chief executive Cameron George has said they will make a decision at the end of the week whether they will remain based in Australia or head home and effectively end the season.

ARL Commission chairman Peter V'landys has told the Daily Telegraph they could go on without the Warriors.

"We'll have more talks with the Warriors during the week," V'landys told The Daily Telegraph yesterday.

"They've been great. If they did insist on going home we'd look at contingency plans and that could be to continue playing. Nothing is certain but we'd have to consider it."

That option would see all sides get a bye if they were scheduled to face the Warriors.

All round two games will take place behind closed doors.

George yesterday denied reports that the Warriors have voted to ignore the NRL's plea for their team to be based in Australia for the foreseeable future.

Brisbane's Courier-Mail yesterday reported that the Warriors' playing group have voted not to remain in Australia beyond their round-two match against Canberra.

George confirmed to NZME that the team have not rejected any plans by the NRL, and will work with every party to figure out their next step after their round two game against the Raiders.

That's consistent with what George said earlier, noting that his team will decide again next week if they want to stay in the NRL or return to New Zealand to be with their families. 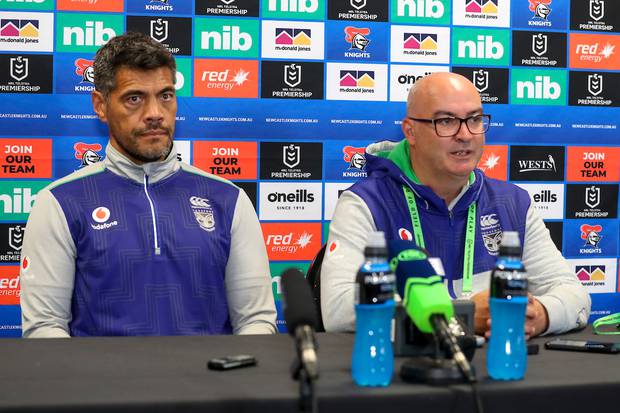 The Warriors face the impossible decision of choosing whether to remain in Australia for the entire season — or return home and be unable to participate in the rest of the season.

Warriors players Peta Hiku and Patrick Herbert have already returned home to New Zealand for family reasons, and the Warriors have left some reserve graders in Australia for cover.

But the new self-isolation policy means no more players will be able to be flown across in the case of further injuries.

The NRL had also planned to fly families across for players, but that and the arrival of further club staff are now also off the cards given none are booked in for travel on Sunday.

"We'll make some big decisions at the end of the week, and it will be based on family and player outcomes," George said.

"There was a lot of devastated players there yesterday, grown men with tears in their eyes because it is really a difficult period to endure when you don't know what the outcome is going to be.

"It's a reality [not being able to play in the competition]. It's on the table, we get through this weekend and we've got to make a decision with the players.

"Do we continue to do this week-by-week scenario? Or if the players want to choose to come home they come home?

He told Martin Devlin on Newstalk ZB the team were unlikely to play any home games in New Zealand in 2020.

"The reality is we probably won't play in New Zealand this year," George admitted.

The Warriors are due to face Manly on Friday March 27 at Lottoland. Warriors veteran Adam Blair's wife Jess voiced her concerns on social media on Saturday over players staying in Australia.

Hiku's wife is heavily pregnant and expecting a child next Friday, while Herbert has a young baby, prompting their calls to come home.

"I have a family and that is something I have to put first," Hiku said. "My partner was telling me to stay. But everything is changing day by day. We didn't want anything to happen where flights were cancelled."

V'landys also admitted the squad couldn't stay in Australia for the whole year.

Speaking before the Australian Government's announcement, V'landys hoped the New Zealand Government could change its policy, which is next up for review on March 30.

The NRL has meanwhile made contact with Warriors' apparel supplier Canterbury for more gear, given they brought enough clothes over only for Saturday's loss to Newcastle.

Players will also be paid an allowance by the NRL while they stay abroad.

Meanwhile the Australian Government's new exclusion policy all but rules the Warriors' reserve grade and junior teams out of NSW Rugby League competitions. NSWRL boss Dave Trodden was on Sunday in Fiji, trying to fly back home before the midnight deadline for the self-isolation policy.