Round three of the NRL has been run and done with rave reviews from fans.

The action on the field has been quicker, the referees have stayed mostly out of the spotlight and most fans don't seem to mind the stadium sounds on the broadcast.

The only issue has been fans not being allowed in but the NRL's Fan In The Stands promotion has given fans the chance to buy a cardboard cut out to fill out the seat in the stadiums.

For just $22, fans can pay to have their likeness — or apparently any likeness — in the crowd at a game, including cute dogs in the stands.

Channel 9's live coverage of the Friday night's match between the Rooster and Rabbitohs even featured commentators Phil Gould and Ray Warren having a giggle at the sight of a cut-out of a fan's dog sitting in the stands.

My dog was just on national TV. Best $22 I've ever spent #NRLRoostersSouths pic.twitter.com/YaKXNWdATX

While other dogs have followed suit along with screaming fans and diehards who went the full makeup look, others have slipped through.

Even British PM Boris Johnson's chief adviser who broke Covid-19 restrictions to travel 402km to visit his parents farm during the pandemic made an appearance.

But at Sunday's thriller between the Penrith Panthers and Newcastle Knights, the joke got a bit darker.

As the game passed into golden point, the camera panned and settled on a section of the crowd.

The r/nrl Reddit subreddit pointed out that there was a serial killer in the crowd with the likeness of Harold Fredrick Shipman on top of a Canberra Raiders cut out.

Shipman was an English doctor who is believed to be the most prolific serial killer in history, having been found guilty of the murder of 15 patients in January 2000, with estimates he may have had more than 250 victims.

He was sentenced to life in prison but took his own life in 2004.

Some in the thread called for a reverse image search to avoid something like this, while others found it an inevitable prank.

But others believed it crossed the line due to the impact it may have on the families of the deceased.

Dr Harold Shipman taking his dog to the @NRL today. Dominic Cummings was there on Thursday. Whoever is doing this is genius 😂😂😂 #Penrith #newcastleknights pic.twitter.com/1YKolNh0v7

Time will tell if the NRL will continue with the cutouts when round four of the competition gets under way next week.

The Fan in the Stands promotion allowed fans to have their likeness portrayed on a 100 per cent recyclable cut-out and placed in their team's current home venue — all for the sum of $22. 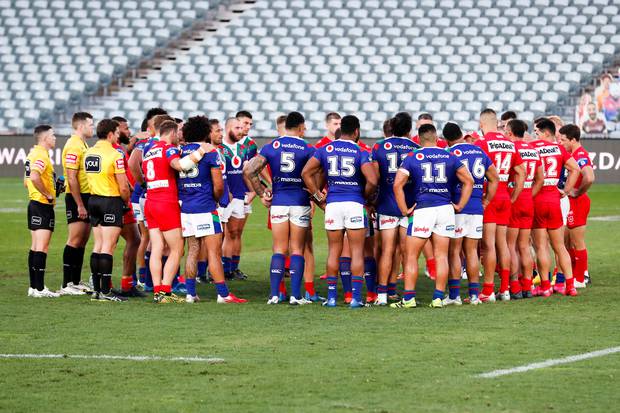 The Warriors thumped St George Illawarra Dragons 18-0 in their return to the NRL. (Photo / Photosport)

NRL head of marketing Peter Jarmain said: "We wanted to make sure the lifeblood of the NRL, our members and fans, had the chance to pull on their jerseys, don their club colours and support in a really fun way," he said, according to NRL.com.

"I know the players and clubs will appreciate the support, even if the fans aren't able to shout, celebrate and jump around for the tries and hits as they usually would."