For all the financial pain and mass redundancies New Zealand rugby continues to endure, the fraught global landscape could alter the player market and present the domestic scene in a much more attractive light.

No one can yet predict the full toll the coronavirus pandemic will have on national unions, clubs and global player wages. Already, though, the intent to reduce spending is emerging for all involved.

"There could be a bit of a rebasing of the player market about to go on," NZR head of professional rugby Chris Lendrum says, tentatively. "A lot of it will be determined by broadcasting ability to pay for rights.

"Talking to colleagues in the UK it sounds like both the [English] Premiership and Top 14 in France will seek to cut player wages across the board. How they reach an agreement on that remains to be seen.

"Everybody is trying to find a sustainable way forward here. If those markets rebase then ours has the potential to as well but it's so fluid at the moment it's hard to say for sure."

What we know for sure is New Zealand, as the first nation to resume rugby in two weeks, is better placed than any to position itself as a more attractive proposition than it has been viewed for some time.

So much of that pitch rides on sorting out the mess that is the unsustainable domestic game – a yet-to-be-determined blueprint that encompasses the Mitre 10 Cup's seemingly tenuous semi-professional status, and Super Rugby's reshaped mid-to-long term future.

But as the Northern Hemisphere remains stuck in a panicked state of attempting to finish this season before the next is scheduled to start, New Zealand etches ever closer a local rebuild in the form of Super Rugby Aotearoa that will not only deliver compelling content over 10 weeks, but likely soon welcome back limited crowds.

"My overall sense is this presents positive opportunities for New Zealand," Lendrum says. "With the world in crisis this is a great time to be in New Zealand. We're a first world country tucked away in the corner of the planet with a strong health system – all of which makes people reflect how lucky they are to be here at the moment.

"That's going to have an impact in terms of player decision-making. In a broader societal and rugby sense, as challenging as the financial climate is at the moment, I do feel we may have an opportunity to bounce out of this comparatively better than other nations." As English and French clubs become more protectionist, lucrative European contracts may dwindle. Private owners in England are fast tiring of losing £7 million ($NZD13.9m) on average each season – the Herald understands one owner alone has shed £50m over several seasons, only to line his players' pockets.

In one season the English clubs conspired to lose more than NZ Rugby's cash reserves pre-Covid. Such eradication of personal wealth on a yearly basis will not continue.

This is why the future of Wasps, London Irish, Worcester and Newcastle are shrouded in doubt and why Lord Meyers' report recommends scrapping the marquee exemption that allows clubs to contract two players outside the bloated salary cap – a system that lured former All Blacks Steven Luatua, Charles Piutau and Lima Sopoaga, among others, in their prime.

"At this time you've got club owners who historically haven't cared much about their ego investment in a rugby team running at a loss because the rest of their business interests have been highly profitable," Lendrum says. "Now that model is really challenged for them so their tolerance for their ego investment is far less.

"Reducing the marquee player allowance would have a big impact on the sort of contracts that have been offered to guys like Lima, Kurtley Beale before him at Wasps, Charles and so on.

"Sitting where we do I feel optimistic there could be some advantages out of this situation, provided we can sort our own backyard.

"If we see more players not taking contracts or there not being as many opportunities as there were overseas and the desire to travel for people with families is less then that might change our depth proposition in New Zealand. We're watching with real interest."

As the pandemic continues to severely impinge life freedoms in other rugby countries, high-profile former All Blacks and middle tier-talent have flooded home in their droves.

While many of these players remain under contract elsewhere and prohibitive insurance costs in the tens of thousands will prevent the likes of Ben Smith and Liam Squire suiting up locally, other free agents such as Julian Savea and Ma'a Nonu are expected to give this year's Mitre 10 Cup a welcome shot in the arm.

Japan is one rugby market more insulated than most, but even Top League contracts are increasingly competitive as Australian, South African and Europeans seek refuge from cutbacks in their backyards.

As it stands, the Top League season is scheduled to restart in January; a timeframe that poses a recruitment threat to New Zealand's elite talent.

Brodie Retallick is contracted for one more Japanese season while Beauden Barrett is expected to use his sabbatical clause there within the next two years.

With this trend in mind, Lendrum believes New Zealand will strengthen its alliance with Japan as the Brave Blossoms under Jamie Joseph eye inclusion in the Rugby Championship and the possibility of linking Top League teams in a southern hemisphere club competition gathers momentum.

"Obviously their competition running in the same window as us presents a challenge but it also presents an opportunity to align with the Japanese and continue the good work we've done with growing our relationship and presence there.

"Put it this way – if there was one market we'd prefer to be in competition with it would be the Japanese." 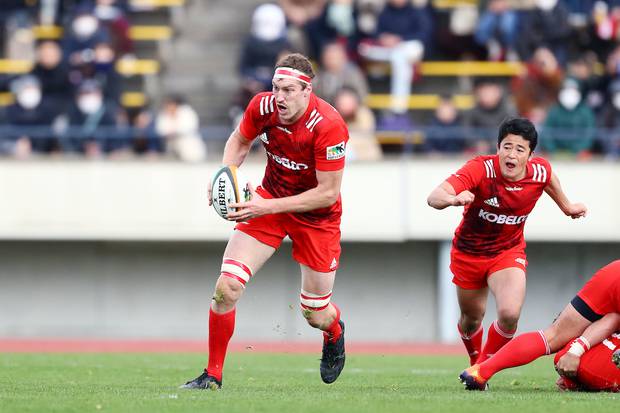 Brodie Retallick has been playing in Japan. Photo / Photosport

From a pure scale of economy New Zealand sits at the shallow end of global rugby. But if - and it is a big if with all the traverses yet to be navigated - NZ Rugby can map a sustainable structure that then attracts significant private investment, there appears hope Covid-19 can yet breed some good here.

"It's certainly possible we could close the wage gap if we get competitions that fans engage with; players want to play in, coaches want to coach in and broadcasters want to pay for. It sounds simple but it's not.

"It's been such a challenging time for so many in rugby at the moment. Everybody is hurting, but we've also got to look at the opportunity in front of us. It's massively exciting to be able to create our own future."