Former All Blacks captain Kieran Read has ranked receiving a Queen's Birthday honour alongside some of his greatest achievements.

One of the most capped rugby players of all time, Read wore the black jersey 128 times during 2008-19. He was a key member of the 2011 and 2015 world champion teams before captaining the All Blacks 52 times, including at last year's World Cup.

The 34-year-old has been made an Officer of the New Zealand Order of Merit for services to rugby — an award he described as a "massive honour" and one his family were proud of.

"You never expect these types of honours but I'm chuffed. [My parents have] always looked over my career and been a part of it for a long time, they got to as many matches as they could. It's the wider community as well, it's friends, your wider family who have taken a massive interest in what I've done, it's a pretty big acknowledgement, so I'm very thankful for it." 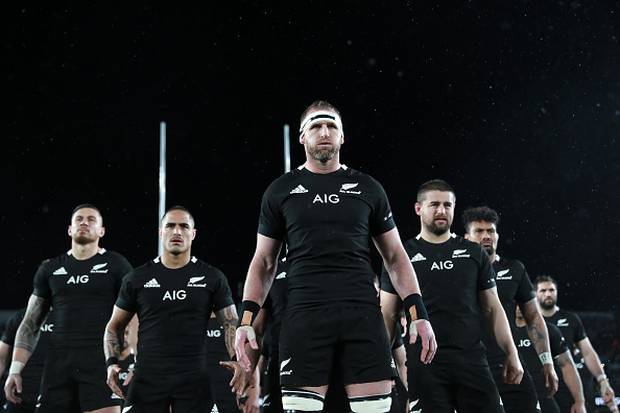 Kieran Read of the All Blacks performs the Haka with teammates. (Photo / Photosport)

Read was contracted to play in Japan after the World Cup for Toyota Verblitz until 2021, but returned to New Zealand to be with his family in Christchurch following the cancellation of the Japanese Top League because of the Covid-19 pandemic.

Like many players in New Zealand, he has been left pondering if he would see out his contract overseas, and has indicated his interest in potentially playing for Counties Manukau in this season's Mitre 10 Cup, due to start on September 11.

Read said he hasn't made any plans yet around retirement, hoping to see out his contract in Japan, but that the recent lockdown had put things in perspective.

"It's a forced break from the game. I was naturally slowing myself down heading to Japan and having not had anything really to train for, it's given me a little insight as to what it's going to be like when I do retire, and in all honesty, it's been fine for me, so whenever that day comes, I'll be more than happy to move into that era of my life.

"The plan at the moment is to head back to Japan, but the season won't start until next year. It's all just a matter of wait and see around borders to get back up and running. At the moment, I'm enjoying time with the family."