New Zealanders and others - prepare yourselves for a drowning out of the haka by England fans before the highly-anticipated Rugby World Cup semifinal on Saturday, as the white-shirted in the crowd attempt to boost their side at the expense of others wishing to hear the challenge.

It will all go a bit "Swing Low" silly before kick-off at Yokohama Stadium but one England player in particular – midfielder Manu Tuilagi - is looking forward to receiving the haka with what he feels is due respect.

"It's an honour to stand there in front of the haka and accept the challenge," he said in Tokyo yesterday. "You respect it. I grew up watching it on TV and to finally stand in front of it is amazing."

Tuilagi, 28, a Samoan by birth who travelled to Leicester in England as a young teenager and made his test debut for his adopted country in 2011, also grew up watching the late Jonah Lomu, who happened to rip England to shreds in this corresponding World Cup game in South Africa in 1995.

"You always watch the All Blacks back in Samoa," he said. "Big Jonah, yeah, a massive fan – just the way he played. No one played like him. He was a big legend of the game."

Asked whether he attempted to emulate the blockbusting wing, who scored four tries in the semifinal, including one after famously running over the top of England defender Mike Catt, Tuilagi replied: "You try but you don't succeed." 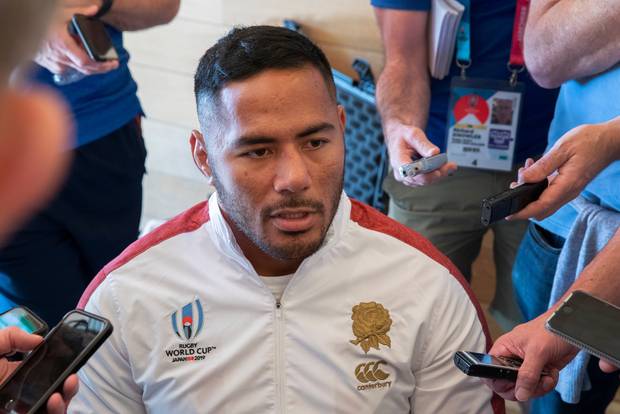 He wasn't far off it at Twickenham in 2012 when his tackle busts and scorching runs helped England to a famous victory over the All Blacks. It was Steve Hansen's first loss as head coach of the All Blacks, and they got mighty close again in November last year.

For Tuilagi, though, the win seven years ago was a case of everyone just doing their jobs.

"It was all about each player, 1 to 23, doing their job as well as they could," he said. "I feel like that's exactly what we need to do this weekend; focus on your own job and do the best you can. The performance will look after itself.

"I'm looking forward to it. It's going to be the biggest game of our lives."

The big man with the northern England accent has come a long way since 2011 when he was a fresh-faced 20-year-old at the World Cup in New Zealand. He was one of England's best during that doomed tournament for Martin Johnson's side – before he blotted his on-field performances by leaping off a ferry into the harbour following a day-long team visit to Waiheke Island.

His progress since has been hindered by injuries but he's finally getting back to his best and England's attack looks far better with Tuilagi involved. Opposing midfielders Jack Goodhue and Anton Lienert-Brown will have their hands full on Saturday night, but the opposite is true too.

"This is the big moment," Tuilagi said. "Sometimes you forget, with everything that's going on, but when you think about this is a dream come true and you've got to enjoy every moment of it.

"For us the focus is to give it everything we've got.

"We're going up against the best in the world. They're a quality team and we're looking forward to the challenge. It's going to be tough, but these are the games you want to play.

"They're very physical and for us we've got to match that and try to stop them. If they get on top of you it's very hard to stop their attack. We've got a massive job to do up front."

Asked whether he had to lead the physical response, Tuilagi quite rightly replied: "That's a role for everyone."

He added: "We have to be ready for everything and I think we are."