New Zealand golfer Ryan Fox has battled his way to another solid round at the PGA Championship that's left him amongst the leaders at the halfway stage of the tournament.

Fox began the day at even par and walked out onto the Southern Hills course's back nine in the afternoon session; the schedule proving to be incredibly favourable for the Kiwi who has played under the best weather conditions on both days so far in Tulsa.

His round began strong, with three pars and a birdie that took him inside the top 15 on the leaderboard, before he hit two speed bumps on holes 14 and 15.

The par-three 14th left Fox in a green-side bunker from the tee from which he struggled to find the hole, taking four shots to seal a double bogey.

The par-four 15th was a similar story for Fox as his approach to the green found a bunker behind the hole. Once again, his short game let him down as he took three shots to gap the 10 metres he had left to the pin.

However, the next 11 holes went much more smoothly for Fox who failed to drop a shot and landed three birdies on his way back inside the top 20 on the leaderboard.

Fox's momentum, however, failed to carry through to his final hole of the day as a wayward tee shot left him scrambling for a bogey that left him once again par for his round and in a tie for 23rd overall.

Not much wind and a lot of Will as Zalatoris leads

The wind finally relented on Saturday in the PGA Championship. Will Zalatoris never did.

From the fairway or the rough, Zalatoris kept hitting the golf ball on the button at Southern Hills and took advantage of gentler conditions late in the afternoon for a 4-under 66, giving him a one-shot lead over Mito Pereira of Chile.

The weekend will include Tiger Woods in his second straight major, a remarkable achievement in its own right.

Playing on a battered right leg from his car crash 15 months ago, Woods was outside the cut line after a double bogey on the par-3 11th hole. He played the final seven holes with two birdies and a pair of 15-foot par saves for a 69 to make it with one shot to spare. 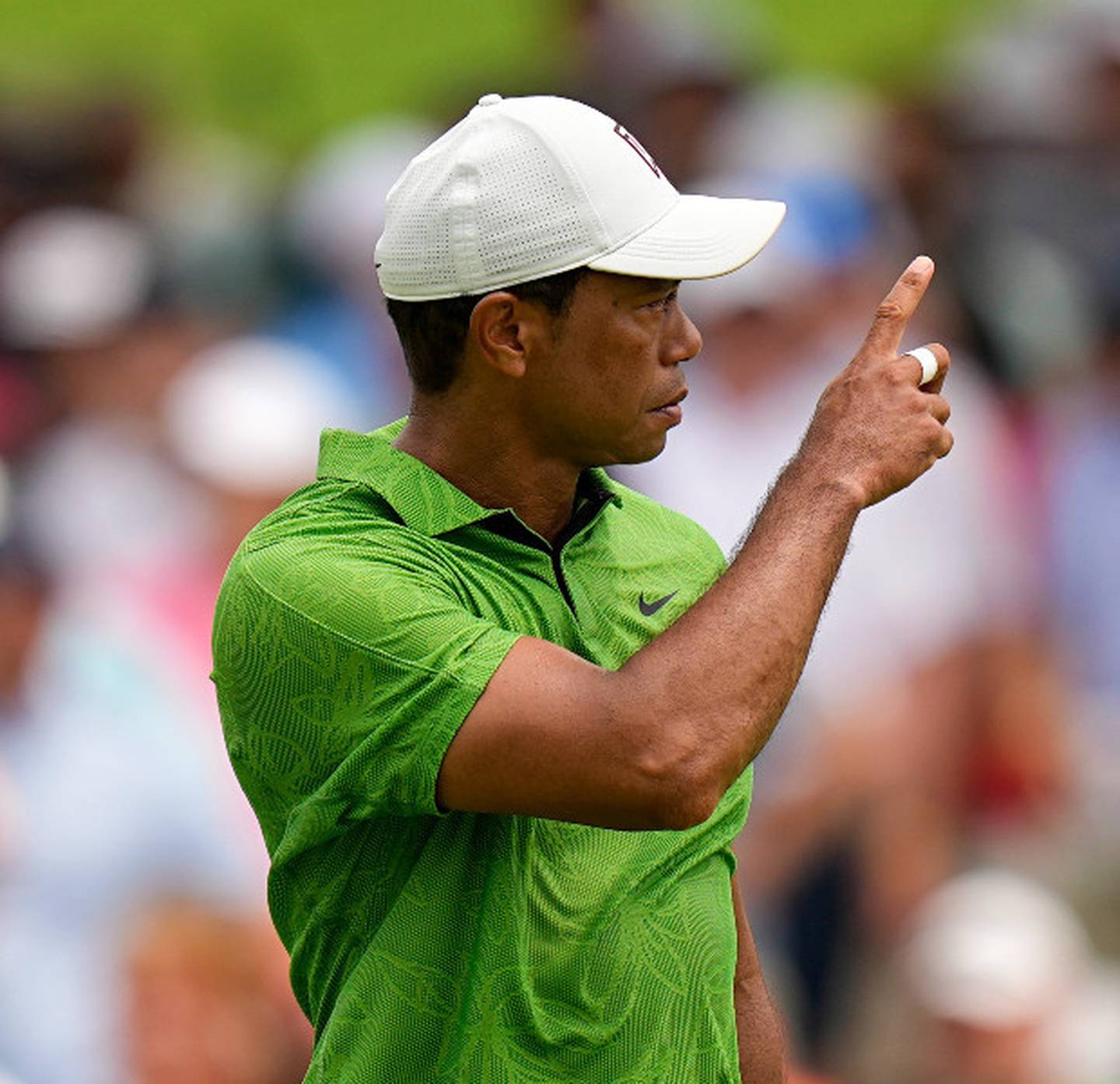 Tiger Woods has battled his way to safety from the cut at the PGA Championship. Photo / AP

But he's 12 shots away from Zalatoris, the 25-year-old from Dallas who is built like a 1-iron and could probably hit one flush with his eyes closed.

No doubt, Zalatoris and his entire side of the draw was helped when wind that gusted over 30 mph in the morning session laid down over the final two hours.

Bubba Watson had a shot at the first 62 in PGA Championship history. He missed from just inside 25 feet on the 18th hole and had to settle for the 18th round of 63 in this major, and the third at Southern Hills. He joined Woods (2007) and Raymond Floyd (1982).

Pereira also had a chance at 63, missing from 7 feet on the ninth hole to close his round.

"I lucked out with the draw, for sure. We played 11 without any wind," Zalatoris said. "When I got out of position, I got the most out of it."

He opened with a shot from the rough that tumbled across the length of the green to 2 feet. He hit another through a gap in the trees to 7 feet. Not only did he have a bogey-free card, all five of his birdies were inside 8 feet.

And all Justin Thomas could do was watch from the couch of his rental home in Tulsa.

Thomas did the heavy lifting in the morning, when the wind was raging and limbs were swaying. He dropped only one shot on his way to another 67 that set a daunting target for Rory McIlroy and everyone else in the afternoon.

And now Thomas is three shots behind, with Watson right behind him.

Of some two dozen players under par, only five came from the wave that played the two windiest windows of the week.

McIlroy got the good side of the draw and failed to seize on the moment. He didn't make a birdie until the 13th hole. That was his only one in a round of 71 that left him five shots behind.

Jordan Spieth, playing alongside McIlroy and Woods, finally got back to even par for the tournament until driving into the water on the 18th for a bogey and a 69. He was 10 shots behind in his bid to get the major keeping him from the career Grand Slam.

The weekend will not include Masters champion Scottie Scheffler, who stumbled badly down the stretch and finished with a double bogey for a 75 to miss the cut — 4-over par — by two.

Jon Rahm thought he might have worked his way back into the mix with a 69 to get to 2-over 142, and he was skeptical about the forecast of wind abating.

"They said the wind was going to go down this afternoon. No, it's not. It's Oklahoma," Rahm said. "It's going to stay just as windy as we had."

Watson had never scored better than 68 in his previous 49 rounds in the PGA Championship. And then he dropped nine birdies and goes into the weekend with a chance.

Zalatoris and Pereira, who led the Korn Ferry Tour a year ago, will be in the final group Sunday, two players still searching for their first PGA Tour title.

Zalatoris has plenty of experience in the majors. He was runner-up in the Masters to Hideki Matsuyama in his debut in 2021. This is his eighth major, and he already has four top 10s.

"When I took the sole lead on 12, I told my caddie, 'Let's enjoy this,'" Zalatoris said. "In my first Masters, I was runner-up and I wanted to enjoy it. I'll take that same attitude."

Woods looked to be headed home after his double bogey on the par-3 11th, where he went from the high grass framing a stream to the bunker on the other side of the green. And then he saved par from a bunker on No. 12, hit wedge to 4 feet for birdie on the par-5 13th, saved par with another 15-footer on the next hole and hit his best shot on the 16th to 4 feet.

"I had to go grind and go to work, and I did," Woods said. "Hopefully, I can get a hot weekend and you never know."

Hot is a popular term in these parts, particularly with memories of 100-plus degrees in August when the PGA was last at Southern Hills in 2007 and Woods won by two. For Saturday, the temperatures were forecast for the low 60s.