George Bennett has become the first New Zealander to finish on the podium at one of cycling's monuments, claiming a superb second at Il Lombardia this morning.

In a stellar week for Kiwi cycling, Bennett backed up his victory at Gran Piemonte with an excellent ride at the famous Italian race, and, seven days after Dion Smith set the New Zealand record for the best finish in a monument with sixth place at Milan-San Remo, Bennett went even better to reach the podium.

He was denied the top step by one of the stars of cycling, with Jakob Fuglsang adding to his 2019 Liege-Bastogne-Liege victory to win his second monument after riding away from Bennett on the final climb.

The monuments consist of the hardest, most prestigious one-day races in world cycling – the one-day equivalents of the Grand Tours – and in 550 races since 1892, no New Zealander had made the podium – until now.

This, admittedly, was not the strongest field to grace the streets of Lombardy, with the truncated schedule as a result of Covid-19 seeing several of the world's best climbers compete at the Criterium du Dauphine in France instead, while a horror crash saw the pre-race favourite, Remco Evenepoel, fly over the side of a bridge with 40 kilometres to go, being taken to hospital.

However, after Evenepoel's accident, six quality climbers were left in contention, and Bennett was one of them. That group reduced to three with 20 kilometres to go, but Bennett was outnumbered, with Fuglsang having Astana teammate Aleksandr Vlasov in tow.

On the final climb, with 6.5 kilometres to go, Bennett tried to make the winning move, and dropped Vlasov, but Fuglsang stayed on his wheel, then counter-attacked to ride away for victory, with Bennett finishing 31 seconds in arrears to claim second place, and the biggest result of his career. 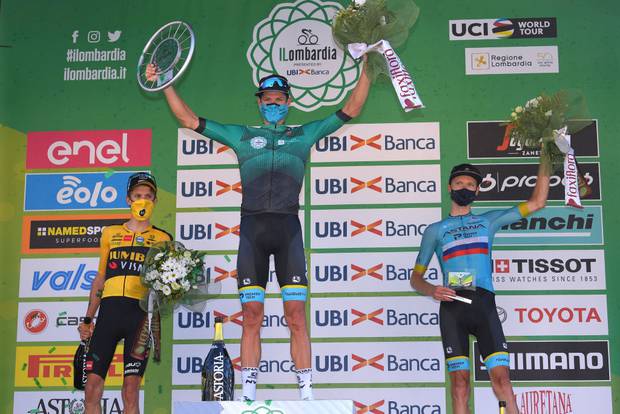 In typical fashion, while knowing he had produced an impressive ride, the ambitious Bennett couldn't help but think what could have been.

"If you told me at the start of the week I'm sure I would have been happy with it, but I can't help but feel a bit disappointed today.

"I really thought I could win, but Astana just had the numbers, and I had to try and make sure it wasn't a two-on-one in the finish. I knew that Jakob was a lot faster than me in a sprint – I had to try and drop him – and it was just too much, I dropped myself.

"It was still a great race and I had a lot of fun – I'm sure I'll look back and be happy about it, but just at the moment, it's hard not to be a little bit disappointed."

Bennett now heads to the Tour de France to support Primoz Roglic, and could be in line for an increased role after teammate and last year's third-place finisher Steven Kruijswijk dislocated his shoulder overnight at the Dauphine.

At this rate, Bennett should be more than up for the challenge.