The cricket world has reacted with shock at the sudden cancellation of the Blackcaps cricket tour to Pakistan.

Cricket commentator Simon Doull said fans in Pakistan and New Zealand need full disclosure of information on the scale of security threat which led to the abandonment of the tour.

In a tweet earlier today, the former Blackcap said his thoughts are with the cricket fans of both nations.

But he said NZ Cricket needs to give what he calls a full disclosure on the security threat.

Doull's comments follow a UK report seemingly confirming the Blackcaps were the target of a possible attack.

According to a report in the Daily Mail, the New Zealanders' decision to abandon the tour "followed information from Five Eyes, the intelligence operation of Australia, Canada, New Zealand, the UK and the USA".

In Pakistan, the focus has been on the disappointment of fans and players, while England's media is wondering whether its tour can go ahead in the future.

"With the New Zealand team the target of the threat, it is inconceivable the ECB board, who meet on Saturday, will allow their men's and women's teams to fly to Rawalpindi next month," the Daily Mail report said about England's chances of touring the country.

Pakistan's Dawn news website is reporting on the disappointment among fans, many of whom have taken to Twitter to condemn the Blackcaps' decision to pull out.

Among the people it quotes is sports journalist Roha Nadeem who tweeted that Pakistan fans had to question how good New Zealand's intelligence sources are: "Have NZ forgotten how Bangladesh players were minutes away from Christchurch mosque at the time of shootings? Where was their intelligence then?"

"...The world moved on like nothing happened but somehow touring Pakistan is a trip to Mordor."

Dawn also said politicians are calling for the decision to be challenged by cricket's world bodies.

It quoted a senior Opposition leader, Mohammad Zubair, as suggesting that Pakistan should lodge a protest, saying there was no basis for cancelling the tour when the security was "foolproof".

Pakistan fast bowler Shoaib Akhtar tweeted that New Zealand had "just killed Pakistan cricket" and reminded the Blackcaps that Pakistan had toured this country during the ongoing Covid-19 crisis and had stood strong with New Zealand over the Christchurch mosque attack. 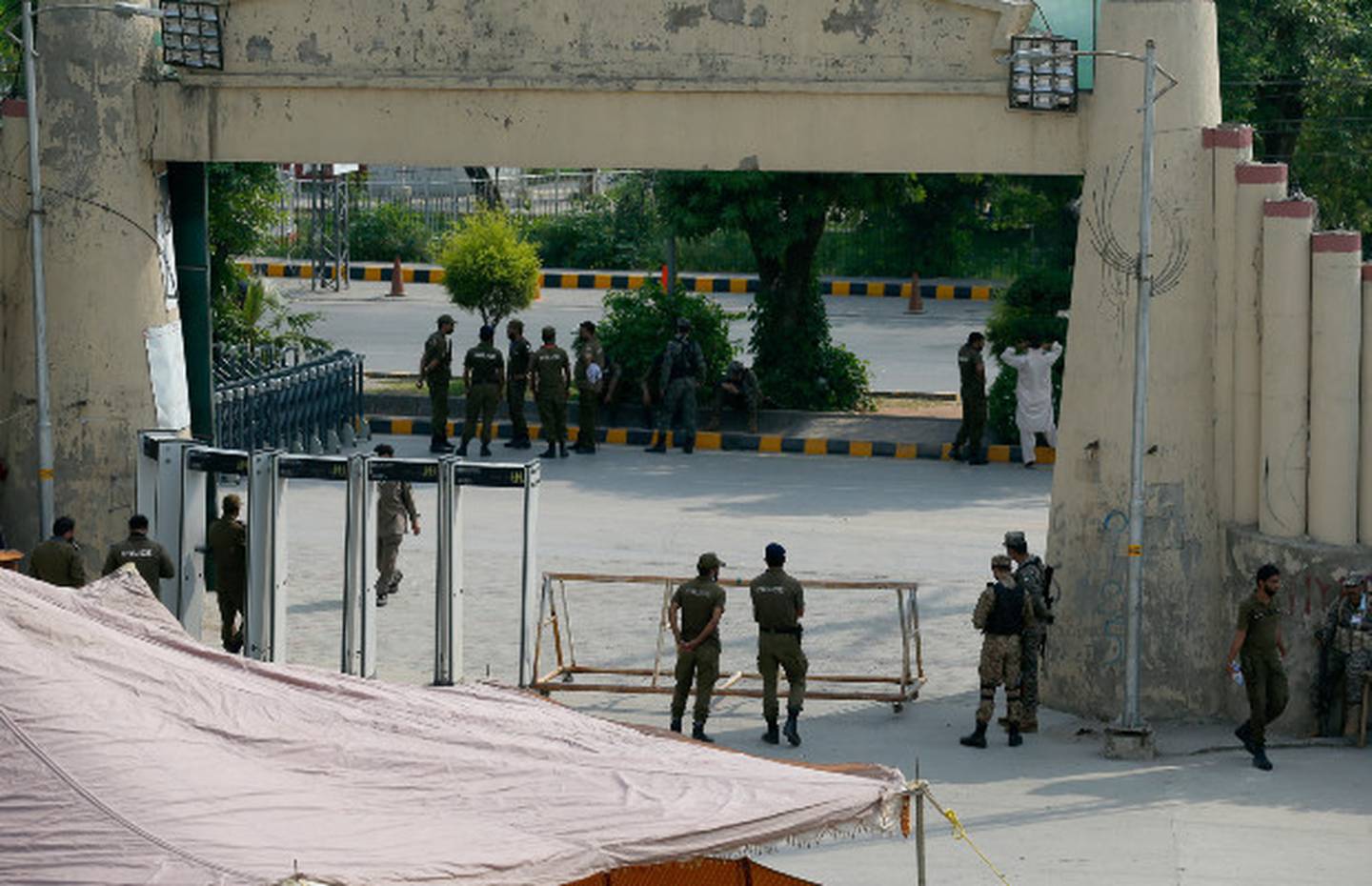 Pakistan's army and police officers stand at the one of the entry point of the Pindi Cricket Stadium. Photo / AP

One of cricket's best writers and an historian of the game in Pakistan, Osman Samiuddin, said the Pakistan Cricket Board is worried the cancellation may set back its efforts to normalise cricket tours.

In an article for Cricinfo, Samiuddin said the Board is frustrated because it seemed NZ Cricket were happy with the arrangements.

"The PCB, and Pakistani authorities, are nevertheless frustrated that, despite repeated attempts, no information has been shared with them regarding the threat, as well as the fact that multiple reassurances as to the visitors' safety, and the state-level security provided to them, fell on deaf ears.

"They also claim that NZC security advisors on the ground, the ones on whose advice NZC said they leaned on to make this decision - remained confident in the security arrangements Pakistan had put in place for the tour. One Pakistan official also asked why, if a threat had become apparent within the last 36 hours, the New Zealand side still turned up to training the day before the game."

Samiuddin cites an advisory by the Rawalpindi police which said a threat had been issued earlier this week.

"It is not clear if this is the advisory NZC acted upon; the PCB say New Zealand had been made aware of two events in the city (a local bodies election and a religious procession referred to in the police advisory) and the schedule had been worked around them.

"Discussions between the PCB and NZC did not consider a venue switch to a neutral country, primarily because it was so late in the day. In any case, the UAE, Pakistan's home in exile for nearly a decade, is ruled out because it is hosting the IPL."

Wisden, known as the Bible of cricket, says that rumours of problems began before the toss with neither side taking to the field to prepare. It says that first media reports attributed issues with Covid-19 as being to blame but it soon became apparent the delay was due to security concerns.

Nevertheless, Wisden points out that Pakistan had been working hard to overcome issues of security for tours.

"Cricket's return to Pakistan has increased in speed in recent times. From 2009 to 2019, very little international cricket was held in the country following a terrorist attack on a Sri Lanka team bus during a Test series.

"Since then, teams have begun to return more frequently, with the entirety of the 2020 Pakistan Super League held in the country, and Sri Lanka returning at the end of 2019 to play the first Tests in the country more than a decade hence."

The Times of India has gone big on the story and points out that this is the first tour abandoned since international teams resumed touring Pakistan in 2019.

The question now is whether England, whose top team attracts lucrative television rights, will continue its proposed tour of Pakistan in a few weeks.

The Times of London said England cricket authorities are "set" to cancel.

The Telegraph said the tour is in "serious doubt".

The Guardian, however, said that the New Zealand cancellation leaves the England tour to Pakistan to play T-20s ahead of the World T-20 championships on a "knife-edge".

It said an England Cricket Board spokesperson told them it was taking the weekend to analyse the situation and was in touch with security experts on the ground.

The Guardian also said it may come down to the attitude of England's T-20 captain Eion Morgan.

"While the ECB may take a different stance to their New Zealand counterparts and decide the tour remains viable, its fate may yet hinge on the players; the view of Morgan, the all-powerful men's captain who previously opted to miss the 2016 tour of Bangladesh due to security concerns, will likely be key."

New Zealand Cricket said it had no choice but to cancel the tour, a decision backed by Prime Minister Jacinda Ardern in a statement last night.