There is set to be a radical change to the format of the 2022 FIFA World Cup Intercontinental playoffs, which would have massive implications for the competing nations, which could include New Zealand.

The playoffs, which are set down for June next year and will feature teams from Oceania, Asia, North/Central America and South America, have been staged as home and away ties for decades, with the winning nations decided by an aggregate score across two games.

But there could be a dramatic shift in 2022.

The Herald understands that FIFA are discussing the possibility of one-off, single leg matches, to be held in a neutral venue.

The format is still to be finalised, but it's believed the one match scenario is the favoured option and will be given the green light.

It's understood that the fixture congestion created by the Covid-19 pandemic, as well as the ongoing uncertainty around long haul travel, are the main factors behind the proposed new format.

The decision will create two of the biggest matches in World Cup qualifying history, with not only a ticket to Qatar on the line, but also more than US$10 million in prize money for the two teams that advance.

It's not yet known where the games will be played, but sources have told the Herald that Qatar is the likely option, given the central location and their newly built stadiums.

The draw, to decide which confederations are paired together, is expected to be held in Zurich before the end of this month.

Intercontinental playoffs have always been full of drama, tension and angst when spread over two matches and a few weeks – now that will be condensed into 90 minutes.

The scenario could have significant implications for New Zealand Football, both from a football and economic perspective.

The All Whites face an Oceania qualifying tournament in March in Qatar, with up to seven other nations from the Pacific region. They will be favoured to progress as regional winners, just as they did in 2009, 2013 and 2017. 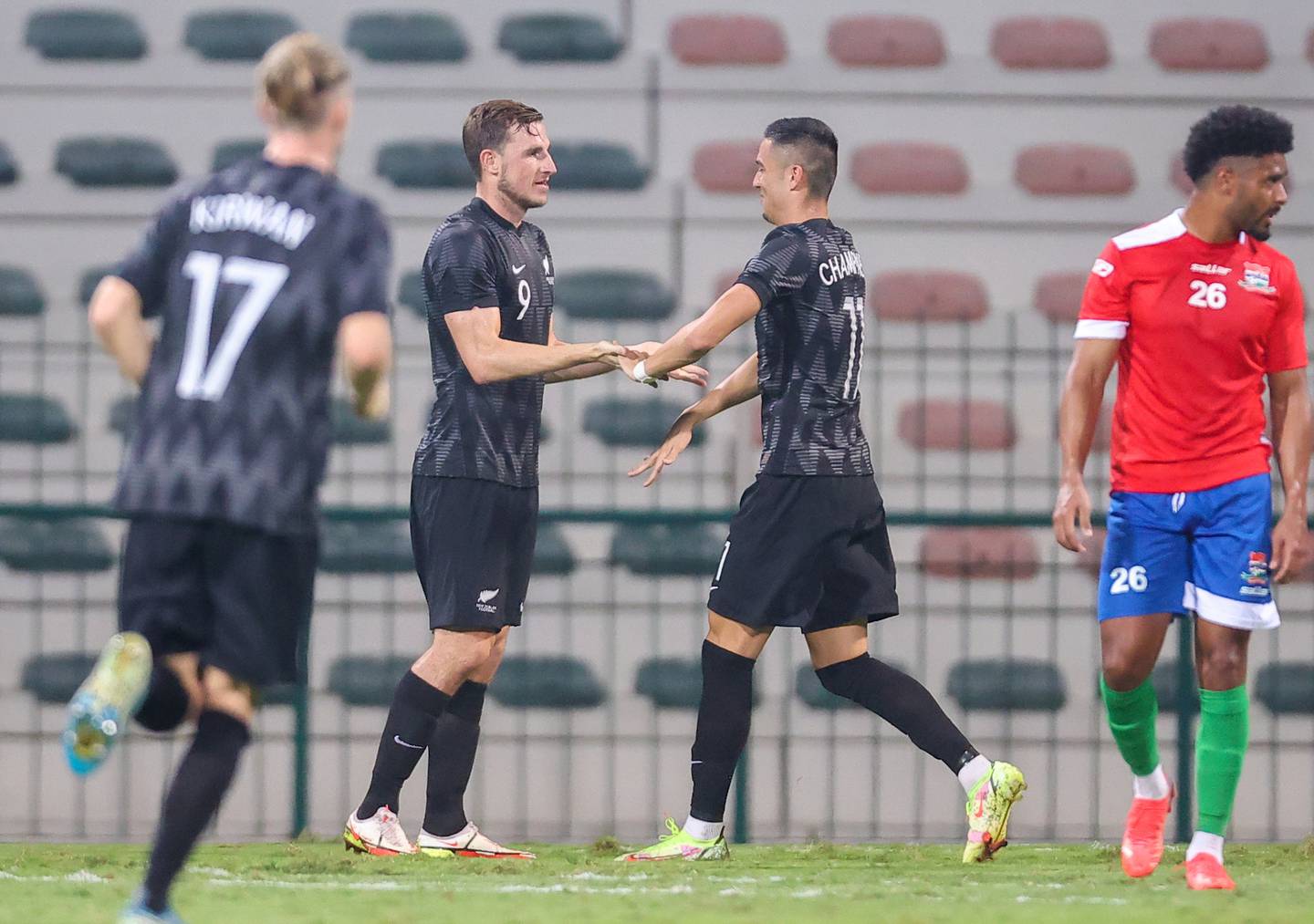 Chris Wood (L) of the New Zealand All Whites reacts with teammates after scoring a goal during their international friendly match against The Gambia. Photo / Getty Images.

From there they will face the Intercontinental contest, against either the fifth-placed Asian team, the fourth-ranked side from CONCACAF or the fifth-best South American nation.

But New Zealand won't be able to bank on a home fixture, like the memorable matches against Bahrain, Mexico and Peru in Wellington.

Hosting one leg of an Intercontinental playoff has been a massive money-spinner for NZF. While FIFA ran the matches and oversaw the operational side, the host nation benefitted from ticket revenue and sale of broadcast rights.

Those games were the one time every four years were NZF were guaranteed sellouts, with the game against Bahrain in November 2009 one of the biggest occasions in New Zealand sporting history.

Even more significantly, they could attract huge television rights income. NZF made close to $6 million from the sale of broadcast rights to the Mexican market in 2013, underlying the massive interest in the football-mad country.

The income from the Peru match in November 2017 was also in the millions.

From a football perspective, a single leg contest changes the equation considerably.

Whereas in previous playoffs there was room to recover from a bad period or poor moment, now there will be almost no margin for error.

If the game is in Qatar the scorching June temperatures will also be a challenge, even if the match is played at night.

On the positive side, the single-game scenario will greatly reduce the travel demands, which were such an issue in 2017, with the All-Whites' elongated trip to South American severely compromising their preparation for the Lima match.

The first FIFA World Cup intercontinental playoff was held in 1985, with Scotland beating Australia 2-0 across a two-legged contest. The Oceania winner variously faced South American, Asian and CONCACAF teams over the next few iterations, while in 2001 the third-ranked Asian team (Iran) was paired against a European nation (Republic of Ireland).

The current four confederation system has been in place since 2005.