Lionel Messi began crying before he even started speaking. The "most difficult" moment of his career had arrived and he wasn't ready for it.

It was time to say goodbye to Barcelona after more than two decades with the Catalan club.

"I don't know if I'll be able to speak," he said while trying to compose himself during his farewell news conference at the Camp Nou Stadium on Sunday. "It still hasn't sunk in that I'm leaving this club, that my life will be changing completely. It will be a difficult change for me and especially for my family. But we have to accept it and move on."

Messi struggled to control his emotions and cried profusely as he stepped up to the podium at the Camp Nou.

"This is very hard for me after so many years, after being here my entire life," he said. "I wasn't prepared."

Messi said that, unlike last year when he asked to leave, he had his mind set on staying with Barcelona and did everything possible to make it happen, including reducing his salary by 50%. He said he was surprised to hear he wouldn't be able to stay because of the club's debt and the Spanish league's financial fair-play regulations.

"In these last few days I was thinking about what I would say today, but to be honest I couldn't come up with anything. I was blocked, like I still am right now," Messi said. "I was convinced that we would remain with the club, which is our home."

Messi's family and some of his teammates were at the Camp Nou for the emotional farewell. He was applauded several times by those in the audience.

The 34-year-old Messi avoided speaking specifically about his future, saying he received offers from several clubs after the announcement that he would leave the Catalan club. When asked about Paris Saint-Germain, considered the frontrunner to sign him, Messi admitted it was "a possibility."

"At this moment I don't have a deal with any club," he said. 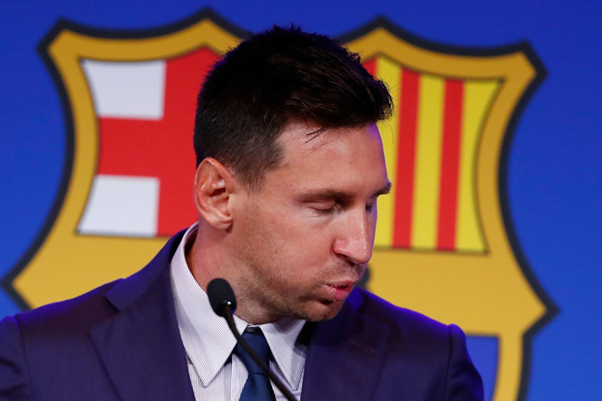 Lionel Messi reacts during a press conference at the Camp Nou stadium in Barcelona. Photo / AP

PSG has been in talks over the weekend with Messi's team trying to finalize a deal.

Sports daily L'Equipe reported on its website Sunday that Messi was to fly to Paris later Sunday to put the finishing touches on the deal with a view to having a medical exam on Monday morning.

An email from The Associated Press to PSG seeking to confirm the report was not immediately answered.

Messi said he hopes to return to Barcelona in some capacity one day and that he wished he could have said goodbye to fans in a match with a capacity crowd chanting his name. He said it was sad to leave after not being able to play in front of fans for nearly a year and a half.

He said his best moment was his first-team debut in 2004, because "that's when it all started." He said he has "no regrets," but believed he was part of a generation that should have won more Champions League titles.

Winning the Champions League again will remain one of his main goals, as well as closing the gap to former teammate Dani Alves as the most decorated player. The Brazilian defender won his 43rd title at the Tokyo Olympics on Saturday. Messi added that he has no immediate plans to retire.

He said it will be "strange" to see Barcelona without Messi, "but with time people will get used to it." He said the club still has good players and can continue to succeed without him.

Barcelona announced Thursday it could not keep its greatest player because it wasn't able to fit a new contract within the Spanish league's financial fair-play regulations. The club's salary cap has been significantly slashed because of its huge debt. President Joan Laporta blamed the club's struggles on the coronavirus pandemic and particularly on the previous administration led by Josep Bartomeu.

"We all thought we would reach a solution without any problems, but in the end it wasn't possible," Messi said. "As the president said, the club is more important than anyone."

Messi asked to leave at the end of the 2019-20 season but had his request denied by Bartomeu, with whom he had clashed.

Messi spent nearly two decades with Barcelona after arriving from Argentina as a 13-year-old to play in its youth squads. He made his first-team debut as a 17-year-old, then played 17 seasons with the main squad. He helped the club win the Champions League four times, the Spanish league 10 times, the Copa del Rey seven times and the Spanish Super Cup eight times.

He said none of the challenges he faced on the field compared to the one of saying goodbye to Barcelona.

"There were many tough moments, many losses, but in the end you always went back to training and to playing again," he said. "This is different. There is no going back. This is the end. Now a new story begins."