Olympic gold medallist Simone Biles told Congress through tears today that the FBI and gymnastics officials turned a "blind eye" to USA Gymnastics team doctor Larry Nassar's sexual abuse of her and hundreds of other women.

While fellow Olympic gold medallist Aly Raisman said "It was like serving innocent children up to a paedophile on a silver platter".

Biles told the Senate Judiciary Committee that "enough is enough" as she and three other U.S. gymnasts spoke in stark emotional terms about the lasting toll Nassar's crimes have taken on their lives.

The 2016 Olympic champion and a five-time world champion — widely considered to be the greatest gymnast of all time — said that she "can imagine no place that I would be less comfortable right now than sitting here in front of you." She declared herself a survivor of sexual abuse.

"I blame Larry Nassar and I also blame an entire system that enabled and perpetrated his abuse," Biles said. She said USA Gymnastics and the United States Olympic and Paralympic Committee "knew that I was abused by their official team doctor long before I was ever made aware of their knowledge."

Biles said a message needs to be sent: "If you allow a predator to harm children, the consequences will be swift and severe. Enough is enough." 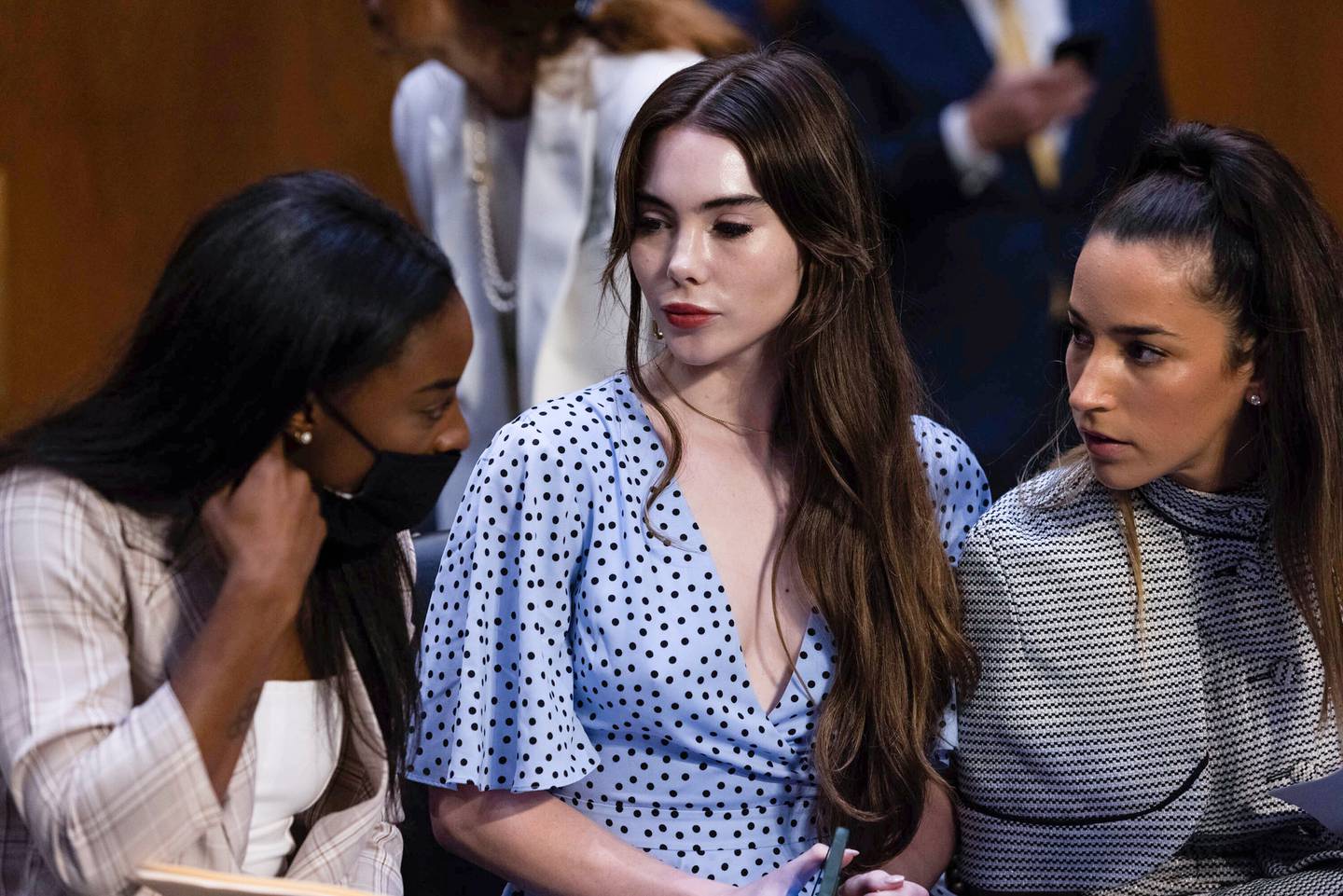 Simone Biles, McKayla Maroney, and Aly Raisman arrive for a Senate Judiciary hearing about the Inspector General's report on the FBI's handling of the Larry Nassar investigation.

The hearing is part of a congressional effort to hold the FBI accountable after multiple missteps in investigating the case, including the delays that allowed the now-imprisoned Nassar to abuse other young gymnasts. An internal investigation by the Justice Department released in July said that the FBI made fundamental errors in the probe and did not treat the case with the "utmost seriousness" after USA Gymnastics first reported the allegations to the FBI's field office in Indianapolis in 2015. The FBI has acknowledged its own conduct was inexcusable. At least 40 girls and women said they were molested after the FBI had been made aware of the problem.

McKayla Maroney, another gold medal winning gymnast, told senators that one night when she was 15 years old, she found the doctor on top of her while she was naked — one of many times she was abused. She said she thought she was going to die that evening.

Maroney said the FBI "minimised and disregarded" her after she reported Nassar and said the agency delayed the investigation as other gymnasts were abused.

"I think for so long all of us questioned, just because someone else wasn't fully validating us, that we doubted what happened to us," Maroney said. "And I think that makes the healing process take longer."

Biles and Maroney were joined by Aly Raisman, another Olympic gold medalist, and gymnast Maggie Nichols. Raisman said it "disgusts me" that they are still looking for answers six years after the original allegations against Nassar were reported.

"We just can't fix a problem we don't understand, and we can't understand the problem unless and until we have all of the facts," Raisman said, noting the traumatic effect the abuse has had on all of them. "Being here today is taking everything I have," she said. "My main concern is I hope I have the energy to just walk out of here. I don't think people realise how much it affects us."

"Nassar found more than 100 new victims to molest. It was like serving innocent children up to a paedophile on a silver platter," Raisman added.

Olympic gymnast Aly Raisman: “Nassar found more than 100 new victims to molest. It was like serving innocent children up to a pedophile on a silver platter.” https://t.co/XMZuu2PHep pic.twitter.com/Pq4wJxrYwx

Biles acknowledged in January 2018 that she was among the hundreds of athletes who were abused by Nassar. She is the only one of the witnesses who competed in the 2020 Tokyo Olympics — held this year after a one-year delay due to the coronavirus pandemic — but removed herself from the team finals to focus on her mental health. She returned to earn a bronze medal on beam but told the committee the lingering trauma from her abuse at the hands of Nassar played a factor in her decision to opt out of several competitions.

Democratic and Republican senators expressed disgust over the case and said they would continue to investigate. Senate Judiciary Committee Chairman Richard Durbin, D-Ill., said it was among the most compelling and heartbreaking testimony he had ever heard.

"We have a job to do and we know it," Durbin said.

Republican Sen. John Cornyn of Texas said Congress must "demand real change, and real accountability, and we will not be satisfied by platitudes and vague promises about improved performance." Sen. Jerry Moran, R-Kansas, called Nassar a "monster" and wondered how many other abusers have escaped justice, considering that even world-class athletes were ignored in this case.

FBI Director Christopher Wray and Justice Department Inspector General Michael Horowitz, who conducted the July report, will testify in a second panel after the gymnasts.

Horowitz's probe was spurred by allegations that the FBI failed to promptly address complaints made in 2015 against Nassar. USA Gymnastics had conducted its own internal investigation and the organisation's then-president, Stephen Penny, reported the allegations to the FBI's field office in Indianapolis. But it was months before the bureau opened a formal investigation.

The inspector general's office found that "despite the extraordinarily serious nature" of the claims against Nassar, FBI officials in Indianapolis did not respond with the "utmost seriousness and urgency that the allegations deserved and required."

When they did respond, the report said, FBI officials made "numerous and fundamental errors" and violated bureau policies. Among the missteps was a failure to conduct any investigative activity until more than a month after a meeting with USA Gymnastics.

The watchdog investigation also found that when the FBI's Indianapolis field office's handling of the matter came under scrutiny, officials there did not take any responsibility for the missteps and gave incomplete and inaccurate information to internal FBI inquiries to make it look like they had been diligent in their investigation.

The FBI rebuked its own employees who failed to act in the case and said it "should not have happened."

The report also detailed that while the FBI was investigating the Nassar allegations, the head of the FBI's field office in Indianapolis, W. Jay Abbott, was talking to Penny about getting a job with the Olympic Committee. He applied for the job but didn't get it and later retired from the FBI, the report said.

Nassar was ultimately charged in 2016 with federal child pornography offenses and sexual abuse charges in Michigan.

He is now serving decades in prison after hundreds of girls and women said he sexually abused them under the guise of medical treatment when he worked for Michigan State and Indiana-based USA Gymnastics, which trains Olympians.