England is unburdened by the weight of agonizing history: Germany has finally been beaten in a tournament again.

No need to endure more penalty heartache or disallowed goals this time.

Just like in the 1966 World Cup final, England triumphed over a German team at Wembley Stadium today, winning 2-0 to reach the European Championship quarterfinals.

And just like in England's two group wins, Raheem Sterling was on the scoresheet, breaking the tense deadlock in the 75th minute in a move he started and completed. 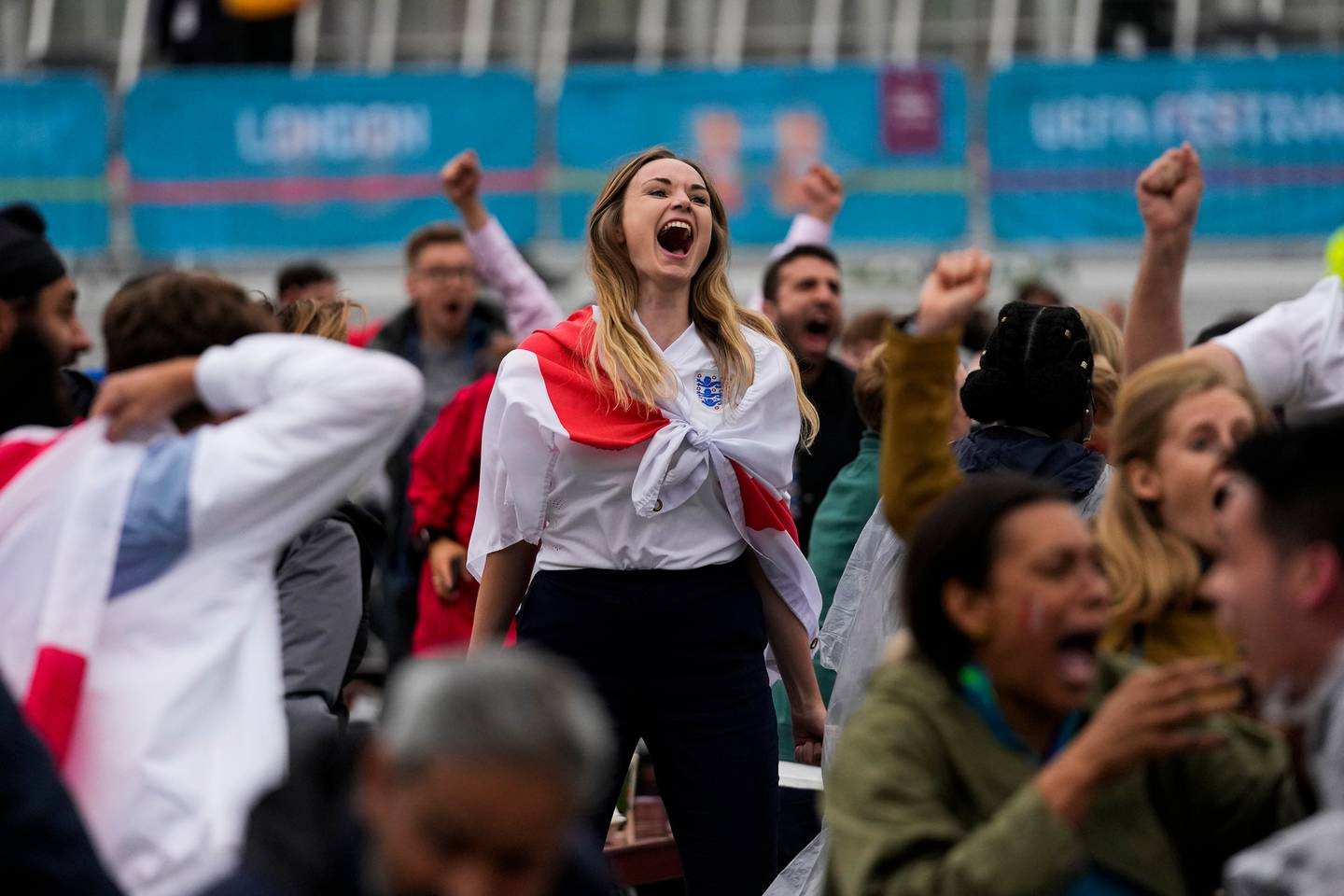 England fans celebrate their team's second goal as they watch the Euro 2020 round of 16 match at a fan zone in central Trafalgar Square. Photo / AP

The round of 16 finally saw England net more than once at Euro 2020, and for Harry Kane to shed the pressure on his shoulders by finally scoring. The striker headed in Jack Grealish's cross in the 86th minute.

"With all the expectation and pressure," Kane said. "We delivered."

It was England's second-ever win in the knockout stage of the European Championship. The last such triumph came on penalties against Spain at Euro '96 before the hosts were denied a place in the final by Germany in a shootout at Wembley. England's manager Gareth Southgate celebrates at the end of the Euro 2020 match round of 16 between England and Germany at Wembley stadium. Photo / AP

It was on penalties that Germany also beat England in the 1990 World Cup semifinals. Then there was the English goal wrongfully disallowed as Germany knocked the English out of the 2010 World Cup.

Now England will play either Sweden or Ukraine in the Euro 2020 quarterfinals on Sunday NZT in Rome, eying a return to Wembley for the semifinals and the final on July 11.

There will still be questions about England coach Gareth Southgate's team selection and persistence with Kane when he managed only one touch in the opposition penalty area in the first half. And it was a bad one, taking a ball too far past Manuel Neuer while trying to go around the goalkeeper.

But while Sterling's goals are spearheading England's progress at this largely-home tournament, the saves of Jordan Pickford are proving vital, too, including using one hand to push over Kai Havertz's shot at the start of the second half. Britain's Prince William applauds before the start of the Euro 2020 round of 16 match between England and Germany at Wembley stadium. Photo / AP

"We had to be brave on and off the ball," England defender Harry Maguire said. "It was really important."

The clamor to introduce Grealish was growing in the second half. It's what got fans chanting inside Wembley, with a crowd of about 40,000 the biggest in Britain since the pandemic began in March 2020.

The winger finally entered with about 20 minutes to go and played a role in the opening goal.

Sterling first took on the defenders, going past Antonio Rüdiger before passing to Kane, whose layoff to Grealish then went to Luke Shaw. And it was the left back's cross that Sterling connected with, shooting past Neuer with his right boot.

These boys are writing their own history.

For all the experience in Germany's side compared to the youth of England, it was World Cup winner Thomas Müller who squandered a chance to equalise in the 81st minute. Clean through with only Pickford to beat, Müller put the ball wide to leave him still without a goal at his three European Championships.

England has yet to concede in its four games at Euro 2020.

"It's a moment none of us will ever forget," said Kane, who scored his 35th international goal. "The perfect afternoon."