The Crusaders are seeking "cultural advice" after damaging the custom-made Super Rugby Aotearoa trophy during celebrations after claiming an unprecedented fourth successive title at the weekend.

Chief executive Colin Mansbridge confirmed to the Herald that Tū Kōtahi Aotearoa, a unique trophy made in Ōtaki and that was presented to the team on Sunday, was dropped after the match against the Highlanders in Christchurch.

When contacted today by the Herald, the Crusaders initially denied that the trophy had been damaged, then said the damage was caused by a transportation case, before admitting it had been dropped.

The Crusaders won a fourth Super Rugby title in as many campaigns by defeating the Highlanders 32-22 on Sunday in the penultimate round of Super Rugby Aotearoa.

"The Investec Super Rugby Aotearoa trophy was designed to be touched and passed around. Following the match on Sunday, the trophy has accidentally been dropped and incurred some minor damage," Mansbridge said.

"We have notified New Zealand Rugby, and sought cultural advice. Repairs will be made as soon as possible." 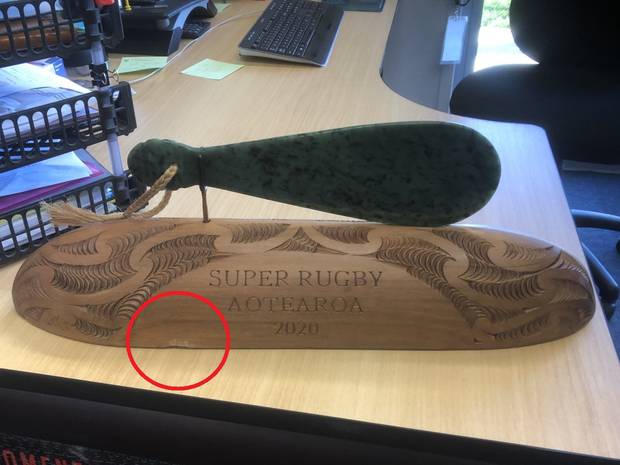 Doyle told the Horowhenua Chronicle the designs in the wood were puhoro, traditional Māori leg tattoo, and unanahi, which represent the scales of a fish.

The trophy represents the coming together of the Blues, Chiefs, Hurricanes, Crusaders and Highlanders in the wake of the disruption and turmoil caused by Covid-19.

Super Rugby Aotearoa is a Kiwi-only competition that started in June after the regular Super Rugby season, also featuring teams from South Africa, Australia, Japan and Argentina, was suspended due to the pandemic.