Bangladesh are aware of the stakes. They know what a test victory in New Zealand would mean.

Defeated in 32 matches across all formats in New Zealand – including nine test thrashings – Bangladesh are on the verge of their most famous away test win, with the Black Caps leading by 17 runs, with just five wickets in hand, going into the final day.

Only five times have Bangladesh won a test away from home – two in the West Indies, two in Zimbabwe and one in Sri Lanka.

Beating the world test champions in their backyard would usurp all those victories, as fast bowling coach Ottis Gibson knows too well.

"I can assure you that we're aware of that," Gibson said with a laugh when reminded on Spark Sport of his team's losing run in New Zealand.

"We knew what we were getting into when we came here, we knew it was going to be tough. We had a lot of time in Christchurch in [MIQ] and we spoke a lot about what we needed to do if we're going to be successful here, and it's really pleasing to see guys have gone out and done that."

After the Black Caps bowlers toiled for 176.2 overs to take 10 Bangladesh wickets, the Bangladesh seamers showed there may have been some life in the pitch after all, claiming five wickets in 63 overs to put the hosts in a precarious position heading into the final day.

Gibson believes their strategies – bowling fuller and straighter than New Zealand – have been on the money.

"In the first three days you might bowl to get catches in the slips and the keeper, but on day four we looked at this pitch and nobody's been caught at slip yet so I said to the guys 'let's keep the stumps in the game, bowl at the stumps, try to hold your length'.

"It's different to how New Zealand bowl, they didn't bowl to length, they went short. That's their tactic, it works for them, [Neil] Wagner's very good at it, but we're different, we try to bowl at the stumps a lot more and it's really pleasing to see that it worked for us."

Ebadot Hossain caused the Black Caps' collapse late on day four with a rapid spell of 140km/h bowling that saw him collect 4-39, and showed why Bangladesh kept the faith in him despite a bowling average of 81.5 in 10 tests.

"He's a joy to work with because he's so enthusiastic and he wants to learn so much. He's very high and low on confidence, when he's confident he can bowl spells like this," Gibson told Spark Sport. 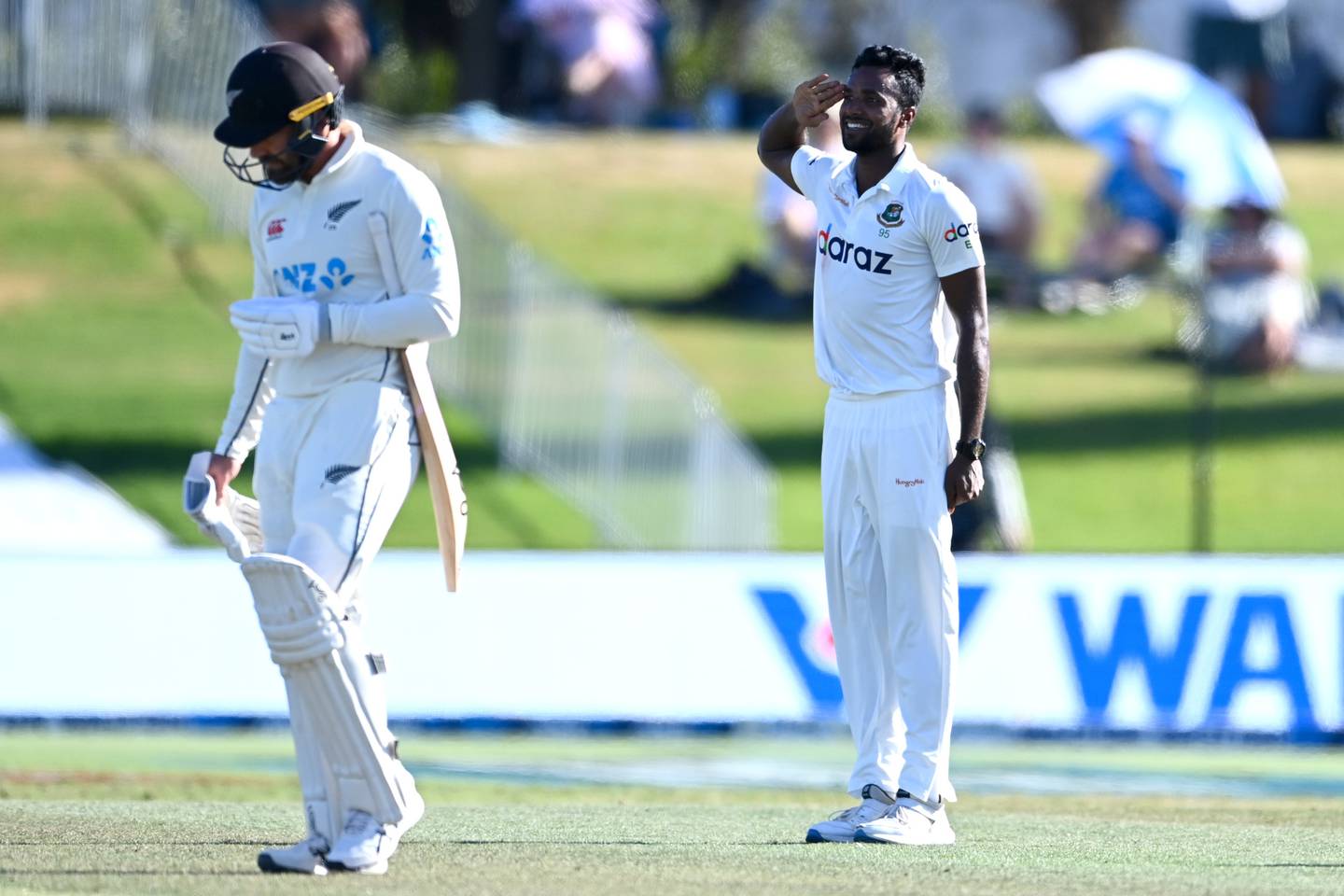 Ebadot Hossain of Bangladesh celebrates the wicket of Tom Blundell of the Black Caps. Photo / Getty

"Maybe the New Zealand batters underestimated us. The discipline we've shown is fantastic.

"I'm pleased for all my team for where we are in the game. We knew the history of how we've gone in New Zealand before we came here, we knew we had to do something special and so far, it's fair to say we've dominated the game, but [today's] a very important day for us as well."

Despite that dominance, Gibson is aware the Black Caps have managed to overcome dicey positions in the past, and knows his side have to perform well today to finish the job.

"We're not going to get ahead of ourselves. It's very important that our medical team get the boys fresh, and then come with the same attitude and the same discipline that we had over the last hours.

"We know what's at stake so we'll just keep it as simple as we can, try and be disciplined and take wickets and see how the game unfolds for us."