By Andrew Alderson at Headingley

They knocked off the 113 runs required in 15.2 overs to reach the 296 required and win by seven wickets as the Baz-ball revolution marches on.

The denouement took 64 minutes after the first session was lost to rain.

England's cartoon-like run-rate of 5.37 in the first innings was trumped by 5.44 in the second.

The morning gloom surrounding the Headingley precinct effectively dispersed for the hosts but intensified for the visitors.

The Black Caps needed to perform a conjuring trick as England evangelised the merits of new coach Brendon McCullum.

Any such magic proved a dud, other than a momentary spark when Tim Southee nipped a delivery back to bowl Ollie Pope for 82, five balls into the day. That ended a 134-run third-wicket stand with Joe Root.

They could have been placing their strokes into an acreage as spacious and free as the Serengeti, such was the stroke-making precision and run-scoring opportunities.

The second over of the day from Trent Boult reminded fans of England's intent as 17 runs whistled across the savannah.

The likelihood is that even if the New Zealand bowlers had served up soggy spheres of papier mache, they would still have been pasted across the rope or into the bleachers.

Such dominant fourth innings performances beggared belief at times as England outwitted New Zealand to chase 296 at Headingley, 299 at Trent Bridge and 277 at Lord's.

Spinner Michael Bracewell was brought on in the eighth over of the day, and duly carted for 39 runs from 4.2 overs. He finished with figures of one wicket for 109 from 15.2 overs.

Two areas highlight how England have orchestrated the triumph.

First, the use of spin.

Man-of-the-match Jack Leach got concussed chasing a ball to the boundary at Lord's and returned three for 226 at Trent Bridge, yet trust ensured he kept delivering. 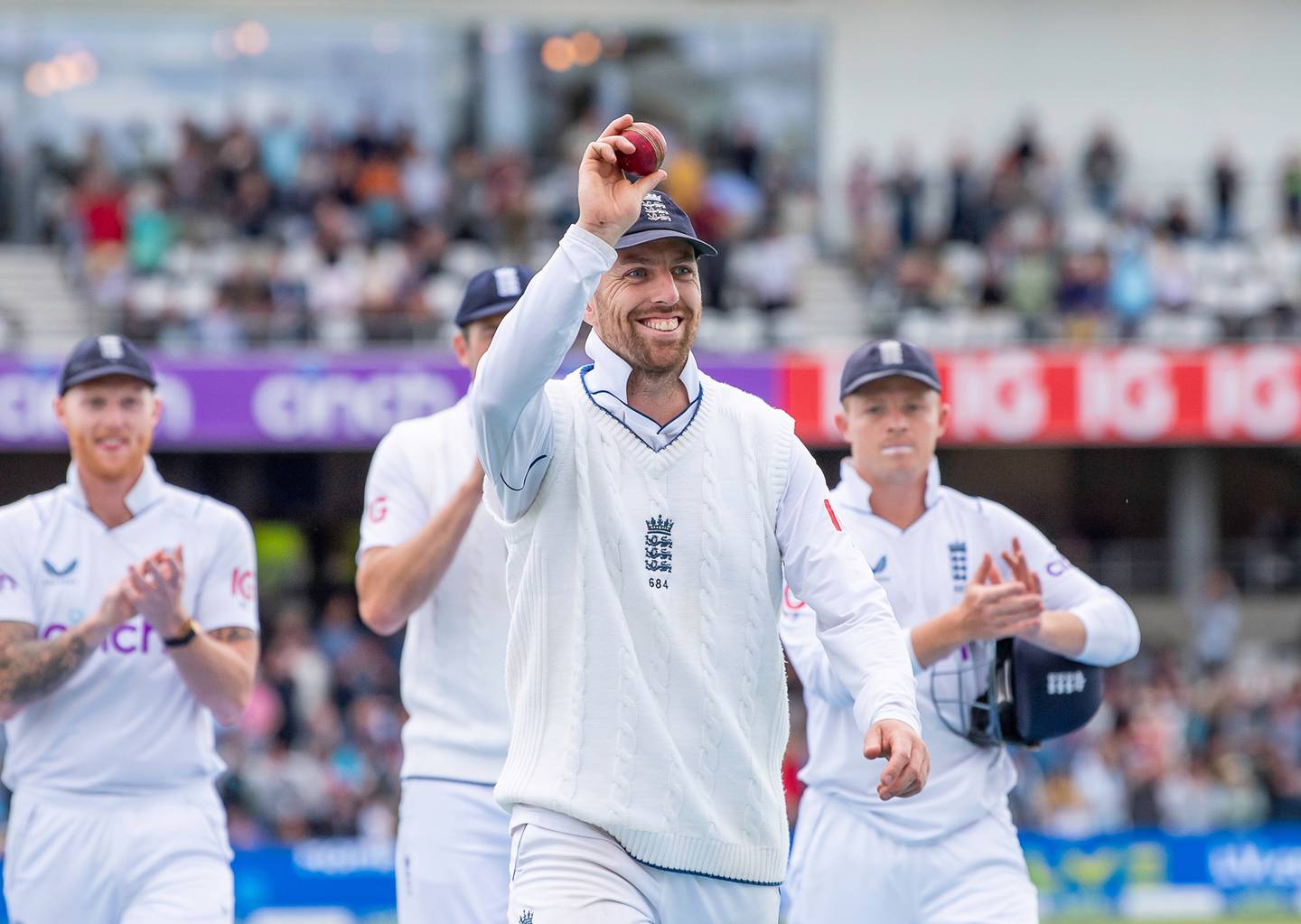 He repaid the faith with a maiden 10-wicket haul in his 25th test, taking 10 for 166. Yes, most were lower order players, but confidence helped him tempt out victims.

Speaking of 10-fors, left-arm orthodox spinner Ajaz Patel sat in the pavilion. The third man in test history to take 10 wickets in an innings last December against India at Mumbai, albeit in a losing cause, has bowled two overs in seven tests since his 14-225 match feat.

Instead the onus went on Bracewell to extract the increasing turn and variable bounce in the second innings. England instead targeted his vulnerability.

The idea of anointing him to scythe through the opposition order in his second test was queried by fans, given he had 30 first-class wickets at an average of 46.83 heading into the match. His enthusiasm and energy were no substitute for experience at the ultimate level of the sport.

The second area is the top order batting, which can be calculated on numbers alone.

England's first four have made 919 runs at an average of 41.77 against a swinging Duke ball.

By comparison, New Zealand's quartet had made 534 runs at 22.50, exposing the middle order prematurely to the ball's shine. That's disappointing for them, given the calibre of Tom Latham, Will Young, Kane Williamson, Devon Conway and, at Trent Bridge, Henry Nicholls.

Fortunately, in the interests of a competitive series, Daryl Mitchell and Tom Blundell constantly eked out runs.

Mitchell's 538 at an average of 107.60 are the most by an overseas cricketer in a series of three matches or fewer in England. That's some feat when you consider tests have been played in the country for 142 years.

The pair faced the second most deliveries of any partnership during a test series. Their 1417 balls is only bettered by Shivnarine Chanderpaul and Carl Hooper's 1511, also across six innings when India visited the West Indies in 2002.

They joined four other duos who have had four or more century stands in a series. David Boon and Mark Waugh combined five times for Australia in the 1993 Ashes; Jack Hobbs and Herbert Sutcliffe completed the feat four times for England in the 1924 equivalent; Vijay Hazare and Rusi Modi did likewise for India against the West Indies in 1948; and Pakistan's Mohammad Yousuf and Younis Khan were equally prolific against India in 2006.