By Andrew Alderson at Trent Bridge

Two dropped catches by first test man-of-the-match Joe Root and an unbeaten fifth-wicket stand of 149 between Lord's batting saviours Daryl Mitchell and Tom Blundell means New Zealand have the advantage over England after the opening day of the second match at Nottingham.

The pair resumed from where they left their record 195-run stand against the hosts at the home of cricket.

They absorbed pressure, confronted their opponents where necessary and regularly rotated the strike to take the visitors to 318 for four. Mitchell will resume on 81 and Blundell 67. Daryl Mitchell (L) and Tom Blundell (R) walk from the field after day one against England at Trent Bridge. Photo / Getty

Mitchell had a penchant for attacking spinner Jack Leach, which included depositing him in Susan's pint of ale in front of the pavilion.

The Black Caps dressing room, seizing a goodwill opportunity, ensured a replacement was dispatched to the local fan.

Blundell used his hand-speed to savage width, particularly anything resembling a half-volley outside off stump.

The partnership reaped benefits where other stands stumbled. That was helped by Root spilling Mitchell on one off captain Ben Stokes at the end of the 43rd over on 169. A sharp chance from Blundell on 47 off Leach also flew past him on 277.

James Anderson finished with two for 42 and Stokes took two for 40.

Stokes chose to field, lured by the pitch's tantalising emerald tinge, but New Zealand played the surface on merit and reaped rewards at close to four runs per over across the day as the Nottingham sun emerged.

The Black Caps made the most of the compacted pitch block and appreciable bounce by getting shots to race away square of the wicket.

The top four met expectations but, unlike Mitchell and Blundell, squandered the chance to fully cash in.

Promise, intent and determination were evident, but undone by concentration lapses. Still, after being 12-4 and 56-4 in the opening fixture, the signs of healing were marked.

A controlled and disciplined opening partnership of 84 between Tom Latham and Will Young built faith, but the value of that investment dissolved in consecutive deliveries bridging the 21st and 22nd overs.

Young demonstrated signs of an epiphany after a pair of hesitant singles at Lord's.

He looked more like the player who had shone for Northamptonshire in the county championship ranks as he acclimatised to the northern summer by scoring 331 runs at an average of 55.17.

The right-hander executed a series of slashing cuts, dismissive pulls and flowing drives on his way to 47.

Eventually, Stokes had him prodding at a delivery outside off stump, which flew low to second slip Zak Crawley.

Latham was more compact, checking and punching his strokes with efficiency as part of 26.

The stand-in skipper for nine of the last 18 tests in Williamson's absence was playing a responsible hand to avoid facing a 45 for seven oblivion like last week. 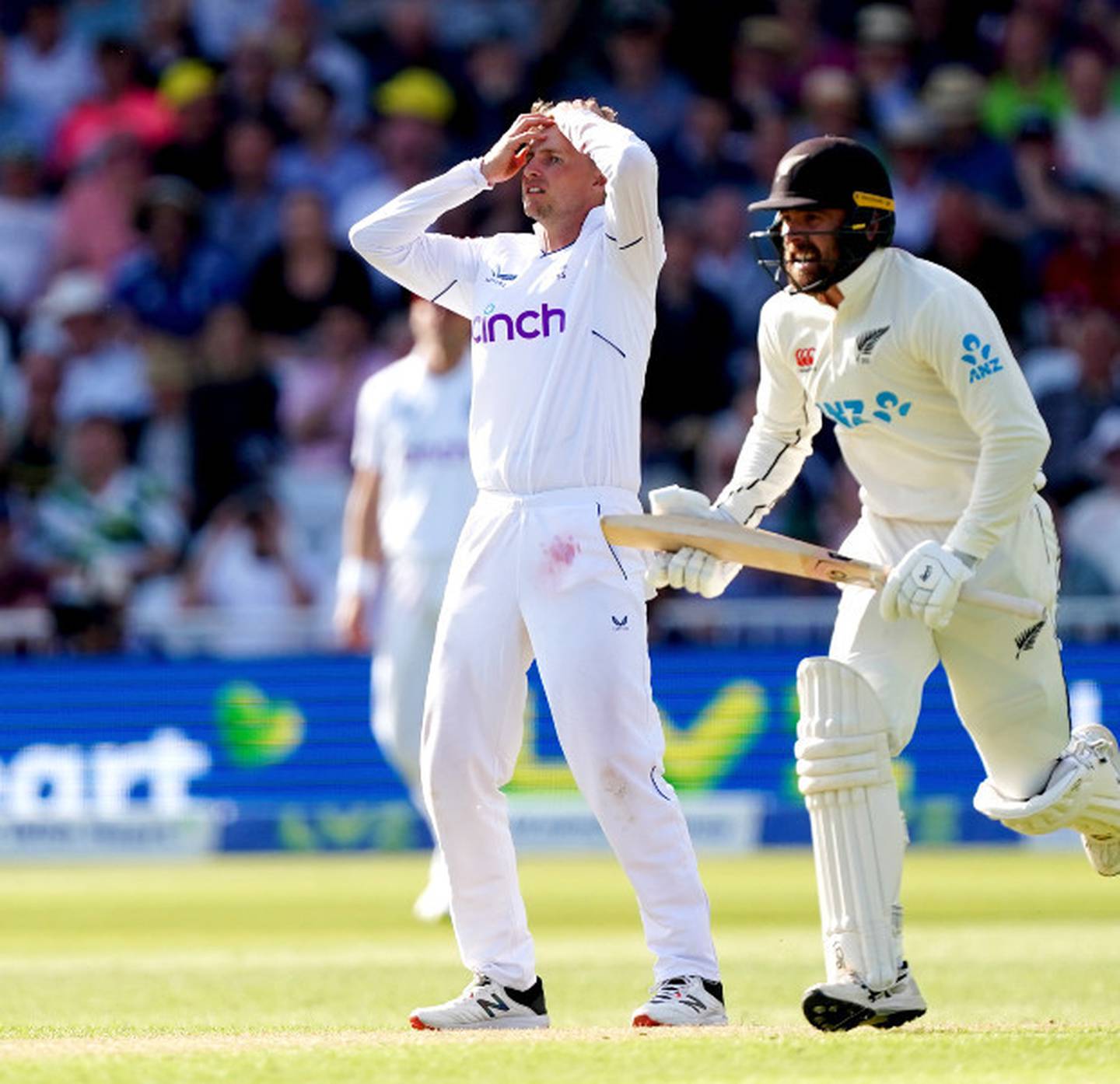 Then an Anderson long-hop was pulled mercilessly to mid-wicket. Matthew Potts, a man blessed with hands you'd trust with a Ming vase, proved the difference between dismissal and boundary. Another close chance bounced in front of Potts in the same position off Devon Conway.

A free-flowing morning of runs extended into the middle session. A key moment for England came at 169 for three as Conway started to look becalmed – at least by his standards - on 46 with two scoring shots from 11 deliveries.

He jagged an inside edge to fall c Ben Foakes b Ben Stokes. The prospect of posting a quality innings after getting sent in by the hosts was under threat.

Nicholls was dropped by Crawley on 17 but still looked assured with 30 after overcoming a calf injury/Covid illness combination.

Enough runs should be present in the pitch over the test. No team has compiled more than 358 in three first-class games this season, but only one side in nine completed-innings has scored fewer than 242.

Williamson's absence meant he became New Zealand's 283rd test cricketer and the fourth member of his wider family to achieve the feat after uncles John and Brendon and cousin Doug.

Nicholls and Matt Henry earned recalls to the XI in the absence of the injured Colin de Grandhomme and the unlucky Ajaz Patel.

All the action from day one of the second test between the Black Caps and England.