A group of All Blacks celebrated winning the Bledisloe Cup against Australia at a Covid-19 location of interest - less than two weeks before flying to Perth for their Rugby Championship campaign.

New Zealand Rugby confirmed to the Herald a group of players visited Auckland's HeadQuarters bar after their second-test victory against the Wallabies at Eden Park on August 14. It was one of four new locations added to the Ministry of Health's list on Sunday night.

According to the ministry, the popular Viaduct bar HeadQuarters had been visited by a positive Covid-19 case between 11.30 pm and 1.30am on Saturday, August 14, the same night the All Blacks registered their record 57-22 win over the Wallabies to lock away the Bledisloe Cup for a 19th straight year.

The All Blacks left Auckland for Perth last Thursday, August 26, three days before HeadQuarters was added as a location of interest - and 12 days after the players' visit.

The ministry added the bar to its list 15 days after the event.

The All Blacks' 35-man squad and management are now in a secure bubble for the next two weeks in Perth that allows them to train and play this Sunday's test against the Wallabies. Following that match, the All Blacks will travel to Queensland for the remainder of their Rugby Championship fixtures.

In a statement to the Herald, New Zealand Rugby medical manager Karen Rasmussen confirmed several players were at HeadQuarters during the window in question but outlined all protocols had since been followed.

"New Zealand Rugby and the All Blacks have been regularly checking the locations of interest to see if any of our staff and players have been impacted," Rasmussen said. "We are aware that HeadQuarters Bar in Auckland has just been listed as a location and can confirm that a group of players was there on the night in question, August 14th, following the test at Eden Park.

"The team has already followed the Ministry of Health guidelines in relation to this location. The All Blacks players and management, under the supervision of the All Blacks medical team, have all been vaccinated. They have also returned two negative Covid-19 tests: the first was 10 days after the date in question, just prior to the team's departure to Perth, and the second was on arrival in Perth. The travelling party will receive a third test before the match against Australia this weekend.

"The Ministry of Health, Sanzaar and Rugby Australia have all been advised."

The significant delay in listing the bar as a location of interest led to an angry outburst on the Facebook page of HeadQuarters, owned by businessman Leo Molloy.

"This was 15 days ago. No staff or customers have had clinical signs or been infected with Covid," read the post. "The muppets rang us on the Tuesday, the 24th, and said they'd been trying to email us but they didn't have 'nz' on the end of the email address!

"I did advise them that this date was, even at that stage, two incubation cycles ago
Now here we go. It's only 15 days old... I hope you all got tested on the 19th and 26 even though you had no idea we were a location of interest.

"Have I not been telling you this is a shambles?" 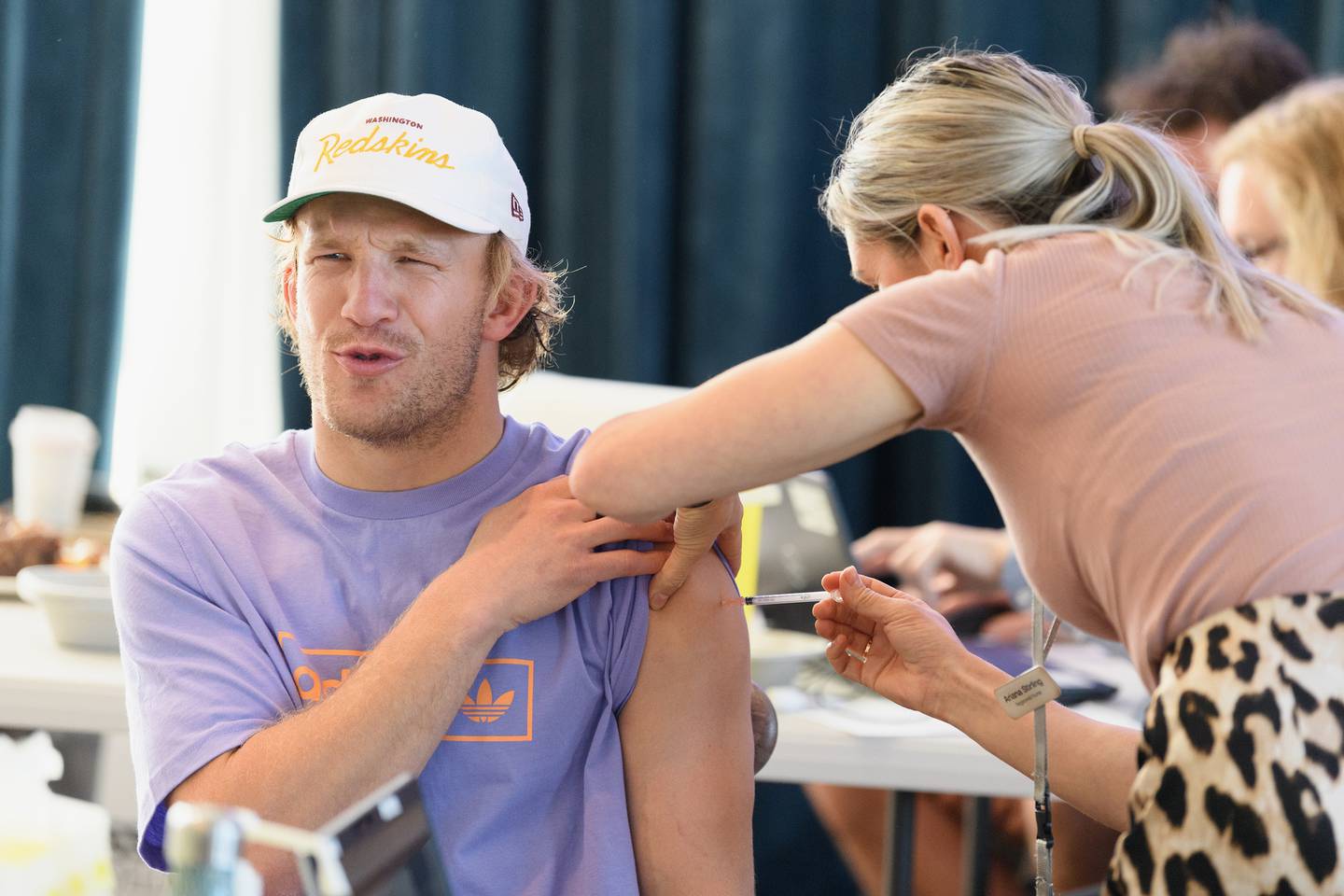 The bar was one of four new locations added to the Ministry of Health's list last night - along with Residence Mount Terrace Apartments, Novi Lunch Bar, and the Strategic dynamics Class in WH125 AUT Campus, Wellesley St East. - with people being told to isolate if they were there on Saturday, August 14 between 11.30pm and 1.30am, and to get tested after days 5 and 12.

There are currently 456 events involving 347 locations across New Zealand.

The country recorded 53 Covid-19 cases on Monday and has 562 cases overall - 547 in Auckland and 15 in Wellington, with 37 people in hospital including five in ICU. All patients are in a stable condition.

On Monday, the Government announced that Auckland would remain in level 4 lockdown for at least another two weeks.

Northland will go to level 3 at 11.59pm on Thursday if wastewater tests which are due on Thursday come back clear.

The rest of the country will move to level 3 as earlier planned from 11.59pm tomorrow night.